THIS May Irish Heritage, a voluntary organisation that nurtures Irish talent in the arts, celebrates its 40th year.

Although officially founded in London in 1974, its roots go way back to the days of Oliver Goldsmith. Born in Co. Longford the prolific author, poet and playwright played the flute and was a great fan of Irish music. He died at 46 but was never forgotten by the Irish in Britain.

Two hundred years after his death, the then Irish Ambassador Dr Donal O’Sullivan honored Goldsmith’s memory at a literary and musical tribute in the Great Hall of the Middle Temple; the first event ever organised by Irish Heritage.

“Apart from marking the anniversary it’s very much a tribute to the co-founder Ethna Kennedy,” says chairman Niall Gallagher of their upcoming celebration.

Ethna and her late husband Charles, a tenor who worked in the Irish Embassy, founded Irish Heritage together. Their goal was to do something unique — presenting classical works with an Irish composer or performing works by great Irish literary figures, but it wasn’t always an easy job.

Seamus McGarry is a prominent member of the Irish community in Britain and a director of the Irish Cultural Centre in Hammersmith.

He’s known Irish Heritage “since its inception” and says it’s important to remember that it was formed in Britain “when the relationship between both countries was at a very low point. It performed throughout the difficult period displaying a different Ireland than was shown on news programmes at the time.”

Since its foundation, Irish Heritage has staged over 250 original shows and shone a light on Irish music, drama, visual and performing arts, adding over 200 musicians, actors, poets, writers and broadcasters to their Hall of Fame. 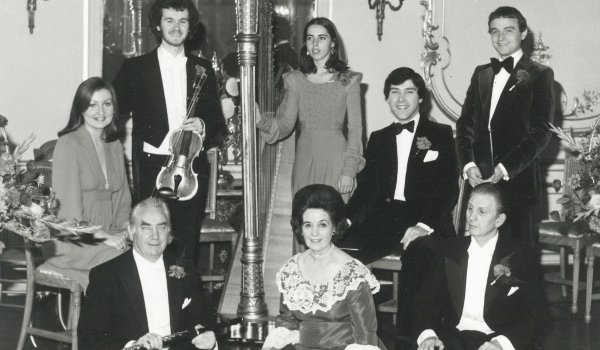 Today, Kennedy still acts as artistic director, despite being in poor health and is hailed as an icon by those who know her. Former Irish Ambassador Joseph Small describes her as the “heartbeat” of the organisation praising her “dedication and enthusiasm promoting the best of Irish culture.”

For harpist Jean Kelly, Kennedy gave her her first break. She moved from Cork to London at the age of 18 to take up a scholarship at the Royal College of Music. Shortly afterwards, she was contacted by Kennedy.

Kelly says “she offered me my first professional concert, introduced me to a whole network of London-based Irish people… and gave me the confidence to believe I had a chance to make a career for myself”.

Baritone Gavan Ring describes his first Irish Heritage recital in London in November 2011 as “a great step towards building a profile in Britain. The programme was intelligently put together… singing quality material in St Patrick’s Church in Soho Square,” he says, and since then the support has continued.

Kennedy’s original vision is still well intact, says Gallagher. “We are trying to do things that are innovative but also to recognise the wealth of talent… and we really try and showcase young musicians.”

Their event on May 8 will be a retrospective featuring soprano Jennifer Davis, tenor Lawrence Thackeray, pianist Harry Sever and actor Donal Cox performing excerpts from some of the great Irish and Anglo-Irish literary and musical figures, mixing opera and Irish music, but it will also be the last event of its kind for a very long time.

“From now on the focus is developing a wider heritage,” said Gallagher. “The underlying principal is to keep the standards high, playing in the best venues with the top artists and developing the talent of young Irish artists right from the beginning of their careers.”

There are plans to incorporate new types of music, work on fresh collaborations here and tie-ups with like-minded organisations internationally and Gallagher is definite that there is more young Irish talent here now than ever before.