THEATRE Director Sara Joyce comes from Co. Wicklow. She studied Drama  and Theatre at Trinity College Dublin before training at L’École Internationale de Théâtre Jacques Lecoq in Paris. She is assistant director at Soho Theatre and this month she directs three short plays by Samuel Beckett at Old Red Lion Theatre in Islington. She lives in London, close to London Bridge.

I’m directing three short plays by Samuel Beckett. They’re wonderful and rarely performed pieces; Act Without Words I, Rough For Theatre II and Catastrophe. We’ve just come to the end of the first week of rehearsals and it’s silly how much fun I’m having. The team behind the production is unbelievably talented and a little bit bonkers. We bring out the best in each other’s craziness. Ideal for Sam the Man.

I admire anyone who is truly comfortable in who they are.

Definitely age zero to 10. Den TV, Pogz, Bosco, Slip ’N’ Slide in the garden, ritual Sunday Cornettos, toys in the bath, couch forts, complete lack of responsibility! Ask me in a few years though, the 20s are pretty great.

It’s a bizarre mix of anything my dad played in the car when I was younger, like American Pie by Don McLean and Take it Easy by The Eagles, Paul Simon and The Bee Gees… that sort of thing.

My family home in Wicklow.

I get annoyed with myself when I feel like I’ve done nothing with my day — wasting time or opportunities.

One Hundred Years of Solitude by Gabriel Garcia Marquez creates a world that is magical but recognisable and I always try to bring that sense of magical realism to the plays I direct.

In school I once entered the Arklow Feis Yeats’ poetry recital competition and lost but I definitely deserved to win. The guy who did win was terrible; he pronounced his “H”s really harshly. No sense of poetic timing. It was outrageous actually. I did come second, but then there were only two of us.

Fionn Walton is an amazing Dublin actor who was in What Richard Did.

I’d love the time and space to have a dog.

Ideastap.com is an incredible resource and network for emerging artists in the UK. It exists as a charity and announced last week it’s inability to continue due to lack of sufficient funding but there’s a campaign, #saveIdeasTap dedicated to preventing its closure and hopefully with help it can continue to support young creatives.

Don’t take yourself too seriously. 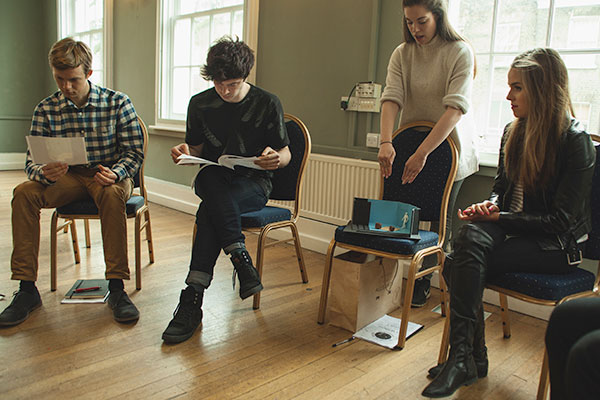 All About Eve. It’s beautifully made and acted and is one of the first films I saw with formidable, honest and real women.

Amongst other things, equality and freedom. It’s ridiculous to think that in 2015 people are still denied access to particular rights according to their sexuality or gender.

In rehearsals when I’m thinking my face goes a bit evil and underbitey! I’m genuinely just thinking but apparently it can be off-putting.

I love where I live, between Elephant & Castle and London Bridge. It’s amazing to be so close to everything — I’m a stone’s throw from the amazing Maltby St Market and the Southbank, probably my favourite place in London. I love the countryside too though and sometimes crave the quiet of being in the middle of nowhere.

God it’s so hard to answer this without sounding w*nky. I do think that Shakespeare’s plays have had a profound influence on literature and even film and TV — it’s hard not to think of Macbeth when watching House of Cards, for example or to see how his basic text construction continues to influence playwrights today.

If someone has a really bad haircut. There’s nothing they can do about it now.

America’s Next Top Model. But I don’t feel a bit guilty about it.

I once saw Steps in concert and, this is absolutely true, H smiled, waved and winked at me — triple whammy. I haven’t moved on.

Three Short Plays: Act Without Words I, Rough For Theatre II and Catastrophe by Samuel Beckett runs at Old Red Lion Theatre April 7-25. Book online at www.oldredliontheatre.co.uk or call the box office on 0844 412 4307