I MOVED to Dublin in the year 2000. That sounds like it’s in the future, but of course it’s not.

Anyway — I lived on Windmill Lane, in a boxy little flat in a boxy big building on Sir John Rogerson’s Quay.

I lived next to the famous studios where luminaries like U2 and, um, The Corrs, sometimes recorded their albums.

The reason I knew this was because the wall outside my flat was covered in graffiti saying complimentary things about Bono.

It had become a tourist tradition to scrawl things there, and it was handy for residents too. We used the wall to scribble down things we needed from the shop, or good ideas we were anxious not to forget.

In amongst the ‘Larry Mullen please to get me pregnant I love you’, you can still see my old notes ‘get cling-film’ and ‘use gloves when self tanning’ — that last one is near a large, orange hand-print.

The main memory I have of looking out my third floor window across the Liffey quays is cranes. So many cranes — once I counted 13, their long necks crossing each other on the skyline — swinging skips and girders around like they were shopping bags.

Giant cranes and regular ones, all busy, all day — knocking down, building and rebuilding a city on steroids. 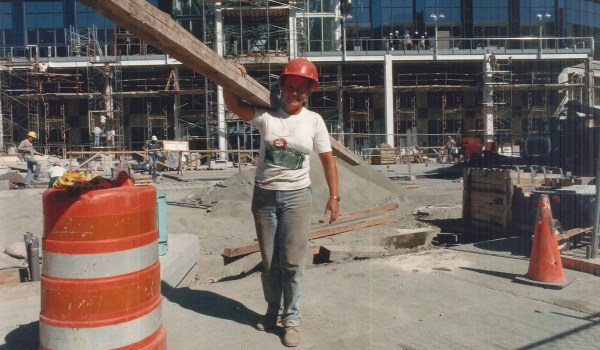 A construction worker on the job

There was constant noise — muffled banging, endless drilling, non-stop clatters, topped off by builders shouting to each other in Polish and Lithuanian about, I guess, lunch time and heads up. I got used to the racket and liked living in a place that was changing before my eyes.

The city felt big and important. I must have looked away at some point though, and the cranes must have folded up and loped away, because suddenly, they were gone.

At the time, my tiny brain didn’t process that their leaving heralded a slow-down in everything else too.

Not everything else — not the most important things like the hearts and minds of Dublin — just the economy, which is also a pretty big deal.

The drugs wore off, things got quiet. Not so here. Every week, a tube carriage full of people moves to London.

I’m one of them, living in Hackney on a street where three houses are being renovated. Beeping trucks, rumbling cement mixers and swearing foremen are my unwanted alarm clock once more.

Walking up King’s Cross Road today, I realise where the cranes went. When the going got tough, they scarpered off London!

I call out to them: ‘Oi you — long neck, this is where you’ve been hiding?’ They swivel around, saying with a wink: ‘No hard feelings mate, we done what we could but there was nothing there for us no more.’

I resist the urge to correct their grammar and suddenly realise I’m in no position to judge them.

I scurry onwards, gratefully making a new life in a city more resilient than my own, fighting feelings of guilt all the same.