THE PEOPLE of Ireland were gifted with an incredible sight in the skies late last night as a rare phenomenon lit up the skies.

The 'Moon Halo' occurs a handful of times each winter, but last night's phenomenon caused a huge reaction as people across Ireland noticed the bright silver halo circling the moon.

Hundreds took to social media to share their photographs and ask what it was, as many had never seen such a thing before.

Astronomy Ireland were inundated with messages and queries, and we spoke to astronomer David Moore who explained what causes the awe-inspiring phenomenon. 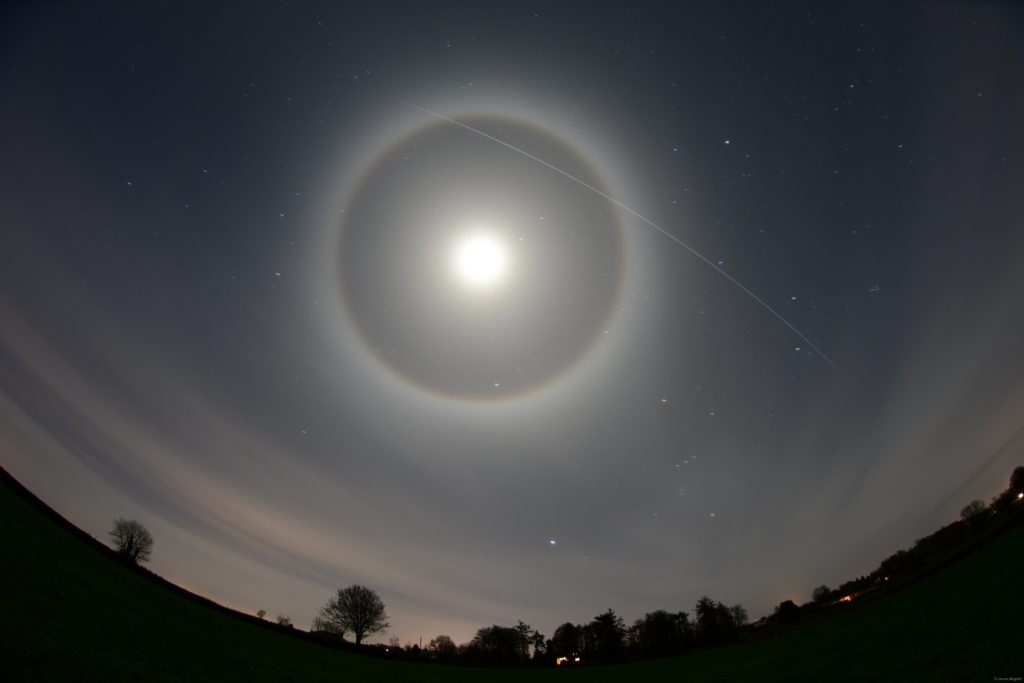 "It's caused by ice crystals high up in the atmosphere and spread across the entire sky, about 23 degrees or so away from the moon.

The ice crystals "bend the moonlight by that number of degrees and it's reflected right back at you, causing this lovely natural phenomenon," he explained.

The Moon Halo can usually be spotted a handful of times throughout winter, but with Ireland now well into spring, it makes last night's phenomenon quite rare, David adds.

"That tells you a bit about how rare it is- during the winter it actually happens quite a bit, when it's cold and there's a high atmosphere to produce ice crystals rather than water vapour which is what you get when it's a bit warmer."

Managed to get a quick snap of the 'moon halo' tonight ! Taken from the Comeragh mountains. Science doing it's thing 🌔@AstronomyIRL @barrabest @mikie2999 https://t.co/YJ9mHZqFIr pic.twitter.com/tkcYlVI8Ag

Taking a closer look at the phenomenon also reveals that it's not just silver in colour, "it's the colours of the rainbow- the inner edge has a sort of coloured fringe, as it were, and you get this rainbow effect as well."

"It's a bit like the rainbow," he says, "where there's lots of drops of water falling from the sky across the entire scene in front of you, but when its 23 degrees away the light will be bent to go into your eye.

It's also similar to the rainbow in that "people think they see it in the same place" but our eyes are just experiencing light's reflection.

So is it essentially a night-time rainbow? Not exactly, David explains.

"It's similar, but where rainbows are droplets of water fairly low down, this is ice crystals extremely high up."

A great photo of the Moon Halo with the ISS passing above it by Kevin O'Callaghan in Cork tonight. pic.twitter.com/lXDQDxuoLm

Astronomy Ireland are asking anyone who saw the magnificent phenomenon last night to send their photographs into the magazine, where they may be included in next issue.