ON TUESDAY, I slept outside in a field in Essex and when I woke up, I swam in a river. I’m very surprised I did both of those things.

I only did them because I made a promise to do so, to a newly single friend who, with all the recklessness of the recently heartbroken, had planned a micro-adventure to distract herself from the rotten feeling of love gone awry.

The idea of a micro-adventure came from an adventurer called Alastair Humphreys who does all sorts of big things with his time off, like rowing across oceans and walking home for Christmas.

Humphreys advocates everyone shaking themselves up a bit, and encourages people who work in offices 9-5 to do something exciting with their 5 to 9s.

He says on his website: “Nobody in the UK lives more than 15 miles from somewhere green, pretty, and invigorating to spend a night.”

Micro-adventures begin after work — you must get out of the city, by bike or foot or public transport, then walk to a scenic spot, make a camp (no tents allowed, just you and a sleeping bag) have your dinner, maybe light a campfire, and go to sleep.

The next morning you wake up, swim in the river and go back to work, possibly with some leaves in your hair and smelling slightly like smoke, hopefully smiling away to yourself the whole time.

My brilliant, heartbroken girl and I set off from Liverpool Street station at 5pm and an hour-and-a-half later, much to my sunlit amazement, we were tramping through golden fields being chirruped at by birds.

We messed and skipped and puffed our way along a pretty little river and scared each other with potential micro-adventure endings, featuring murderers, slugs and distracted combine harvester drivers.

At around 9.30pm we had our picnic, then sat down. I had no bivvy bag, so my girl wrapped my sleeping bag in black bin liners, like a total hero.

We bedded down near a friendly tree, totally out in the open, and it was incredible. 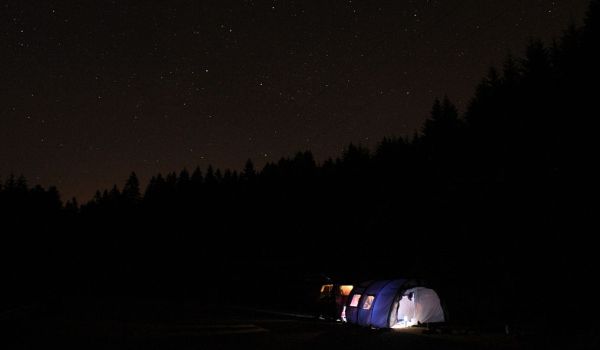 Such a big sky of dusky light, filled with little flitting bats and stars that popped out one by one, reporting for cosmic duty.

Some were late for work, and shot across the sky busily as we yelled for joy beneath them.

Then I got cold. I put on a polo neck and a hat, pulled the bin liners a little closer (stop me if you’re getting too turned on) and felt much better, like maybe I’d make it through the night.

And I did! We both did. Then, I went swimming in a river for the first time ever. It was silty and murky and blew my mind.

We got dressed, walked some more then ate walnuts and nectarines on the train with matted hair, smiling away the whole time.