A LETTER from former Mayor of Vermont, Bernie Sanders to the former Prime Minister of the UK, Margaret Thatcher demanding the fair treatment of Irish prisoners has begun to go viral after resurfacing online.

The letter, written in 1981, was uploaded to Reddit Ireland by user u/TheHowlinReeds, who captioned it "Found this while tearing my hair out over the US elections, thought ya'll might get a kick out of it".

In the letter, Bernie Sanders, who is currently a Democratic hopeful in the US presidential elections, tells Margaret Thatcher that he is "deeply disturbed" by the British Government's treatment of Irish hunger strikers.

"We are deeply disturbed by your government's unwillingness to stop the abuse, humiliation and degrading treatment of the Irish prisoners now on hunger strikes in Northern Ireland.

"We ask you to end your intransigent policy towards the prisoners before the reputation of the English people for fair play and simple decency is further damaged in the eyes of the people of Vermont and the United States. 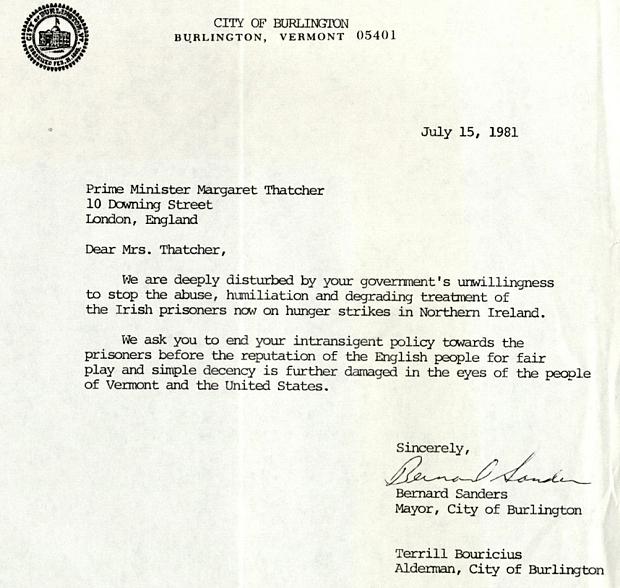 At the time the letter was written, Bobby Sands was leading the hunger strike at Maze Prison in a battle for incarcerated members of the Provisional IRA to be treated as political prisoners.

The treatment of the prisoners, the British Government's refusal to make concessions, and Thatcher's comment upon the death of Bobby Sands that he was a convicted criminal who "chose to take his own life" has resulted in Margaret Thatcher being known as one of the most reviled characters in Ireland.