THE TAOISEACH found himself in hot water recently after his comments on the "benefits" the climate crisis could have for Ireland were widely condemned across the board.

Leo Varadkar commented during the launch of the government's first climate change report and said there were "pluses and minuses" when it came to climate change, citing warmer winters and lower heating bills as part of the "benefits" of the global crisis (Read all about it here).

Soon after Mr Varadkar's comments went viral, the Irish branch of Extinction Rebellion released a statement detailing their disappointment with the "negligence and hypocrisy" of the Irish government, saying they were left with "no choice but to rebel".

And that they did-- in fantastic fashion.

Extinction Rebellion are known for their non-violent but disruptive form of protesting but have taken a new approach this time, as a group of demonstrators set up camp outside Leinster House in Dublin dressed for a day at the beach on "Leo's fantasy island".

In a photo posted by the group, the protesters are seen wearing swimsuits, laying on sunbeds under a parasol and surrounded by pineapples, coconuts-- and placards with the Taoiseach's comments stamped across them. 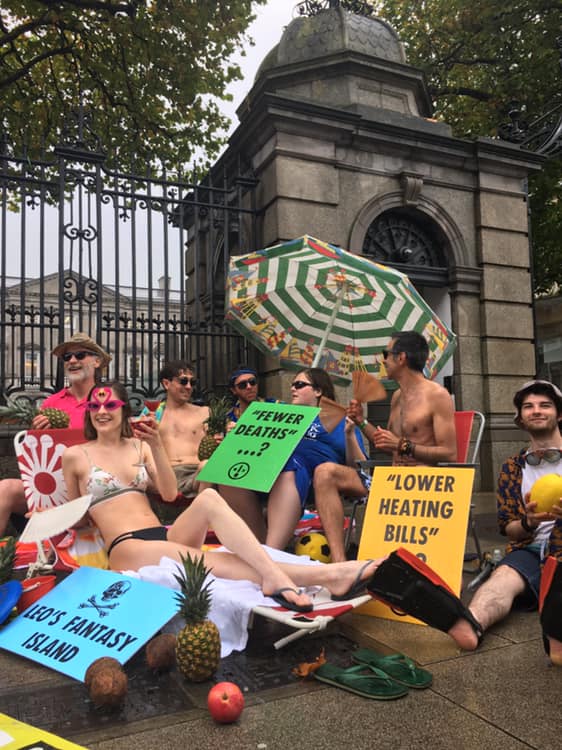 The group also posted a live video of the demonstration, where the stark contrast between the protesters and those surrounding them can be clearly seen-- photographers and passersby wear raincoats and heavy clothing in the drizzly 9° weather-- you can view that on the Facebook page here.

Last week, demonstrators performed a decidedly less sunny protest outside a Dublin hotel where a fossil fuel industry conference was taking place, where members staged a 'die-in' and poured fake blood on themselves outside the entrance to the hotel.