Food and drink at Cork Airport gets an major overhaul

A MAJOR upgrade is being planned for food and drink facilities at Cork Airport.

This summer, passengers travelling through the airport can expect to benefit from a whole new menu of delights, part of a €4million investment project at the airport.

Food and drink offerings will be the biggest change by far, benfiting outbound passengers in particular with a new food court being opened in May.

The investment programme also includes an additional passenger security screening channel with a fifth security lane opening in June ahead of the summer season.

“Almost two and a half million passengers travel through Cork airport every year,” said Frank Gleeson, MD of Aramark Northern Europe, who will oversee the food court.

The news comes following the announcement of a number of new routes from the airport, including a Norwegian Air International direct ransatlantic flight between Cork and the US.

Norwegian plans to launch with a new Cork-Boston service was well as a New York.

Scroll down for details of the new food court

"We have been working closely with the team at Cork Airport and local food producers to develop a menu that showcases what makes Cork the gourmet capital of Ireland," Frank Gleeson added.

"I’m certain that we will be serving up some of the tastiest food in region and there will be a lot of happy travellers at Cork Airport.”

Fire and Rescue Service at the airport are also set to benefit from the construction of a new fire training ground.

The new state-of-the-art facility will be built at the end of May. 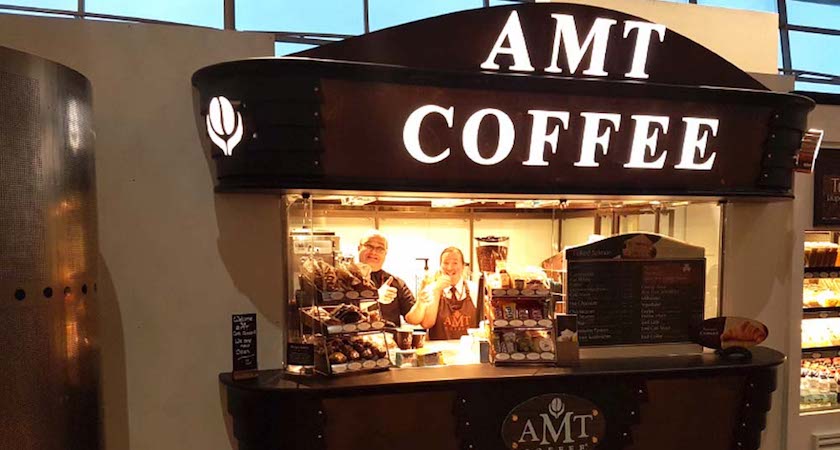 AMT Coffee is already up and running at Cork Airport

The food court - what you need to know...

The new Food Court will be located airside in the Departures area and is replacing the existing restaurant, which was located landside.

There will also be a new Kinsale Café and Bar, which replaces Cork Coffee Roasters and starts trading this month in the Arrivals Hall.

Craft Lane is a new bistro bar replacing The Last Call, will open next month in the Departures section.

AMT Coffee has already begun trading from the Departures Hall, where Lir Café was located previously. They are operating from a temporary outlet while more expansive coffee shop is being built.