DERBY day arrives at the Twickenham Stoop tomorrow as London Irish take on Conor O’Shea’s Harlequins in Round 6 of the Aviva Premiership.

Having met in a two legged pre-season series earlier this year, this will be the third time the sides meet this season, so expect a fierce rivalry and some top class action.

Despite the Harlequins v London Irish rivalries, there are many familiar faces within both camps.

Number 8 Tom Guest, who made over 200 appearances for Harlequins, is likely to return to his old stomping ground along with Fijian international Aseli Tikoirotuma and Joe Trayfoot, who both transferred to the Exiles for the 2015/16 season.

Have you got your ticket to Derby Day at The Stoop?

Tickets are still available for the match in what is promising to be a fantastic match day atmosphere and game against two London rivals. Book your tickets by clicking HERE or calling 020 8410 6010. 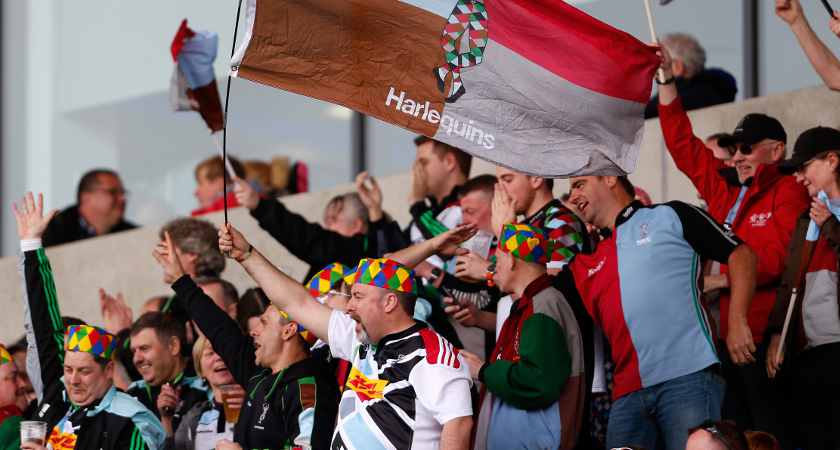 Harlequins fans will be hoping their side comes out tops over London Irish. Picture Getty

On the other side of the fence England winger Marland Yarde will be facing his old Club while the Harlequins Director of Rugby Conor O’Shea will be at the helm of Quins’ exciting game plan having played 127 times for Irish as full back.

Harlequins, who will call on the likes of James Horwill, Mike Brown, Danny Care, Adam Jones, Tim Visser and Chris Robshaw will be looking to cemet their place in the top four of the table, while London Irish, bolstered by New Zealand’s Ben Franks and Scotland’s Sean Maitland will look to get their Premiership season off the ground as they search for their first win.

Get your tickets for the match and enjoy a fantastic match day atmosphere when Harlequins take on London Irish. Book your tickets by clicking HERE or calling 020 8410 6010.