A HEAVILY pregnant Irish woman has gone viral after sharing an image of the meal she was served during her stay in a Limerick hospital maternity ward.

Despite purporting to be a beef stroganoff, the resulting dish depicted in the picture looked unappetising to say the least.

Consisting of a grey lumpy sauce alongside an assortment of steamed vegetables including the unusual trio of Brussels sprouts, cauliflower and potato croquettes, this culinary catastrophe was topped off with a side order of boiled rice.

Served to the woman in a bowl at University Maternity Hospital Limerick (UMHL) on St Stephen’s Day, it’s fair to say the meal didn’t go down too well with the recipient.

Taking to Facebook, she posted an image of the offending food on the It’s Limerick Now Facebook page for all the world to see.

“It looks like some sort of days old leftovers slapped together,” the caption accompanying the image read. “Sickening.” 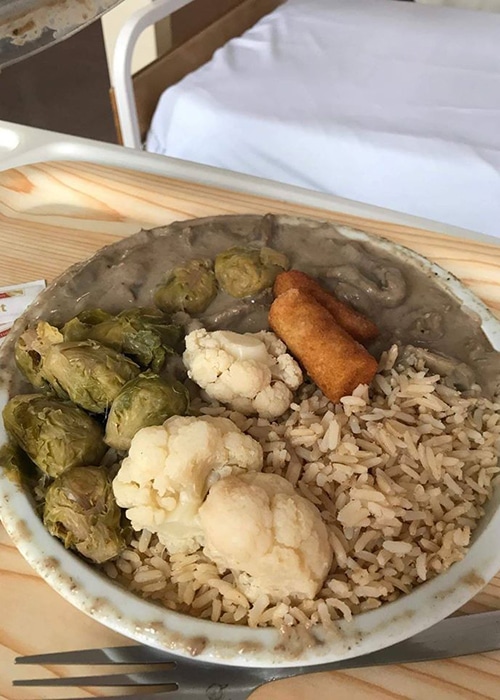 The woman, who was 10 to 15 days away from giving birth, opted against eating it, opting to instead visit a local Chinese restaurant.

While the couple were keen to praise the efforts of those working on the maternity ward, that didn’t stop the image from going viral online with Health Minister Simon Harris forced to answer questions about a dish he admitted “doesn’t look like food anyone would wish to eat.”

“I’ve obviously seen the photograph. I am obviously not aware of the background to it,” he added when pressed.

He added: “That obviously doesn’t seem to be in line with those standards, but I am obviously not aware of the background.”

A UL Hospital spokesperson has since branded the meal “unacceptable” and confirmed that an investigation has begun.

“It is completely unacceptable that a meal should be presented to any patient in this fashion and this matter is being investigated.”

“Catering services throughout UL Hospitals Group are undergoing a review at present and complaints such as this will be used to improve services,” they said