American President Joe Biden was among those paying tribute to Betty White, after the Golden Girls actress died at the age of 99.

White passed away at her Los Angeles home on New Year's Eve, less than three weeks before her 100th birthday.

President Biden described White as a "cultural icon", while journalist Dan Rather said she was "a spirit of goodness and hope".

Betty White brought a smile to the lips of generations of Americans. She’s a cultural icon who will be sorely missed. Jill and I are thinking of her family and all those who loved her this New Year’s Eve.

A spirit of goodness and hope. Betty White was much beloved because of who she was, and how she embraced a life well lived. Her smile. Her sense of humor. Her basic decency. Our world would be better if more followed her example. It is diminished with her passing.

Although best known for her appearance in the popular '80s sitcom, White had worked in the entertainment industry since the 1940s.

Starting out on radio after serving in the American Women's Voluntary Services during World War II, she then moved into variety shows and sitcoms.

She was a regular on talk shows and game shows throughout the 1960s and beyond, which would earn her the unofficial title of the First Lady of Game Shows.

Celebrating 99 years of your love on the planet. Thank you Betty White 🙏🏾 pic.twitter.com/NUmNq1BOZ9

Betty White broke barriers, defied expectations, served her country, and pushed us all to laugh. Barack and I join so many around the world who will miss the joy she brought to the world. I know our Bo is looking forward to seeing her up in heaven. pic.twitter.com/tVL7NUw2TT

Sad news. No more Betty White. Too bad we couldn’t get another ten years of her always warm, gracious, and witty personality. She was one of a kind!

Meanwhile, her role as Sue Ann Nivens in The Mary Tyler Moore Show in the 1970s earned her two Emmy Awards.

The Golden Girls premiered in 1985 and ran for seven years, earning her seven more Emmy nominations for her portrayal of naïve Rose Nylund.

She continued to appear on television until her death, including a regular role in Hot in Cleveland and recurring roles in Boston Legal and That ‘70s Show. 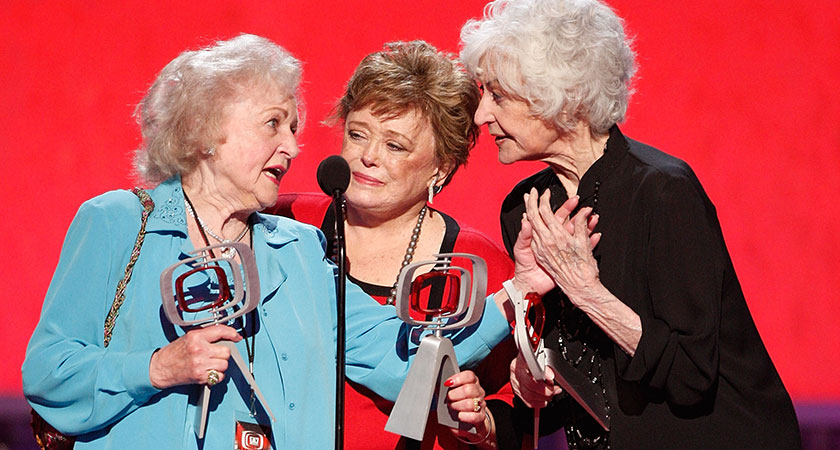 She also had cameo appearances in 30 Rock, The Middle and Malcolm in the Middle.

Meanwhile, her film credits include 1999's Lake Placid and The Proposal in 2009, while she appeared alongside Sigourney Weaver and Jamie Lee Curtis in 2010's You Again.

White is survived by her three stepchildren from her marriage to Allen Ludden, who died in 1981.

While watching the news last night I learned of Betty White’s passing. Betty will live forever not only in this world but the world here after. I will always love her as we all will!

We are saddened by the passing of Betty White.

Not only was she an amazing actress, she also served during WWII as a member of the American Women's Voluntary Services.

A true legend on and off the screen. pic.twitter.com/1HRDYCeV7w

I had the honor of working with Betty White on my series BOB & the finale of Hot in Cleveland. She was such a pro! My 1st standup TV appearance was April 1960 on Jack Paar & Betty was a guest. Today, we lost a giant.

It's hard to face the fact that we all now live in a world without a Betty White.#Irreplaceable #RIPower_Queen pic.twitter.com/Ha8WumdTid

Our national treasure, Betty White, has passed just before her 100th birthday. Our Sue Ann Nivens, our beloved Rose Nylund, has joined the heavens to delight the stars with her inimitable style, humor, and charm. A great loss to us all. We shall miss her dearly.

Betty White was the perfect guest- interested, playful & funny. She loved animals (invited my puppy on the show). She loved to play games- Password (obvi) & I even played beer pong with her. She always knew how to hit her mark & deliver the joke. A class act. I loved Betty White. pic.twitter.com/XxWD16VQIV

The world looks different now. She was great at defying expectation. She managed to grow very old and somehow, not old enough. We’ll miss you, Betty. Now you know the secret. pic.twitter.com/uevwerjobS