AS the FIFA corruption scandal took a decidedly Irish twist it had to be with a sinking heart that most Irish football fans took in the revelations.

Surely? Well not, necessarily, if you were following the Irish media.

First up, a quick summary of the events.

As arrests and allegations flew around FIFA a few weeks ago John Delaney was to the fore in calling for Sepp Blatter to go and positioning himself as an all-round voice of moral probity.

The FAI, we were told, had never and would never vote for Blatter.

This was despite John Delaney being caught on the hop by a radio journalist asking him about an alleged €5million payment to the FAI following Ireland’s infamous defeat in the Thierry Henry handball match.

John Delaney told us that the matter was confidential.

Then the corruption investigation intensified and a recently re-elected Blatter announced he would be resigning.

Next the FAI and FIFA began telling us how it was that this payment of €5million came into being.

According to John Delaney after he had used a few expletives to tell Sepp Blatter what he thought of him, FIFA decided to give the FAI a loan of €5million that subsequently did not have to be repaid.

The money was to stop the FAI from pursuing a legal case over the match in Paris.

None of this makes sense, legally or ethically.

The idea that the FAI could have taken FIFA to court over a refereeing mistake is ludicrous.

Sure, the decision cost Ireland a place at the finals but that is the nature of sport.

Referees make decisions and as humans sometimes they err.

It is hard to see on what basis that could constitute a court case. 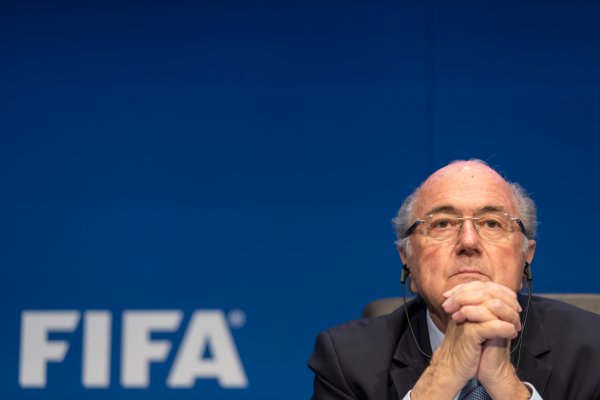 John Delaney seems to think he can take a high moral stance over Sepp Blatter.

This would be the John Delaney who said after the game in Paris that ‘this is not about the money, this is about sporting integrity’.

Except that sporting integrity turned out to be worth €5million.

Yet to see some of the response to this was to see the continuing fault lines that run through Irish society.

It was as if what John Delaney called a ‘very good deal’ for Ireland was just that regardless of the circumstances.

In this version of events Sepp Blatter is a stain on world football unless it happens to be Ireland who is the beneficiary.

In this version of events we are the ‘cute hoors’ and sure it’s a great craic all together that we got the big money for losing a match.

In this version of events ethics do not feature if it is little old Ireland getting away with it.

In this version of events Sepp Blatter is a corrupt sporting despot who our brave John Delaney has a few choice words with - and when given the cash to shut up and go away, the FAI does just that.

And it's great craic.

It is as if FIFA corruption does not apply to plucky little Ireland and sure aren’t we the best supporters in the world. Doesn’t everyone love us and sure weren’t we robbed.

But it is either wrong for the FAI to take Blatter’s money or it is not.

It can’t be right to take it under some circumstances and not right under others.

It can’t be right to demean yourself after unfairly losing a match by calling for a replay to be allowed to qualify anyway and then take some money to go away.

Sadly, that is what Ireland’s investigative journalists and self-styled fearless speakers like Eamon Dunphy should have been talking about because the self-congratulatory, self-aware, celebration of our own sleeveenism just shows that old habits die hard.