Rugby World Cup: French threat to Ireland is as great as ever

PAUL O’CONNELL insisted Saturday's farewell show at the Aviva was not all about him.

And he was right. Instead it was about a team that had started to believe in its own hype regaining a sense of self-awareness. Having risen to second in the world rankings, claiming back-to-back Six Nations championships along the way, we had allowed ourselves think the unthinkable.

World Cup champions? Could it be us? Jake White, who guided South Africa to the 2007 World Cup, said it was possible. Will Carling suggested it was not. Where there is a will, there is not always a way.

On Saturday, Ireland couldn't find their way past a stubborn Welsh defence, who had improved immeasurably in the three weeks since they were outpaced and out-thought in the corresponding fixture in Cardiff. "Judge us later in the month," said Shaun Edwards, their defence guru, intriguingly after that game.

You can see why he wanted to wait. He knew Wales would improve. Did he know something we didn't about Ireland? If so, he kept it quiet.

Now we all know something new. For starters, O'Connell has little appetite for personal farewell parties. Despite his superb career, and the knowledge that after Saturday, he won't play an international in Ireland again, the last thing he wanted to do after the final whistle was address the crowd from the middle of the pitch.

Lap of honours are meant to be celebratory occasions but the only thing the Aviva patrons could shout about on Saturday were the great performances from O'Connell's past. "It was very disappointing," O'Connell said of Ireland's display against the Welsh. "There were lots of things we wanted to improve on. But we weren't able to do that. From here on in, we have a lot to work to do ahead of the World Cup."

No one, however, will be working harder than Ireland's medical department. Coming into this game, there were doubts hanging over Cian Healy (neck), Andy Trimble (ankle) and Marty Moore (foot) participating in this World Cup. After Saturday, Jonny Sexton needed an ice pack to ease the bruising in his right arm. If this was a friendly, then you'd hate to see these sides go at it when something significant is at stake.

At stake for Joe Schmidt now is making sure he gets it right come October 11 (when Ireland meet France in the pool stage) because so much went wrong on Saturday. Disjointed in the loose, his side didn't get enough possession to cause Wales trouble. Worse again, their set-plays were average; their lack of creativity, disturbing.  "After losing to Ireland three weeks ago, we all made a decision not to panic after that result," said their man of the match, Justin Tipuric. 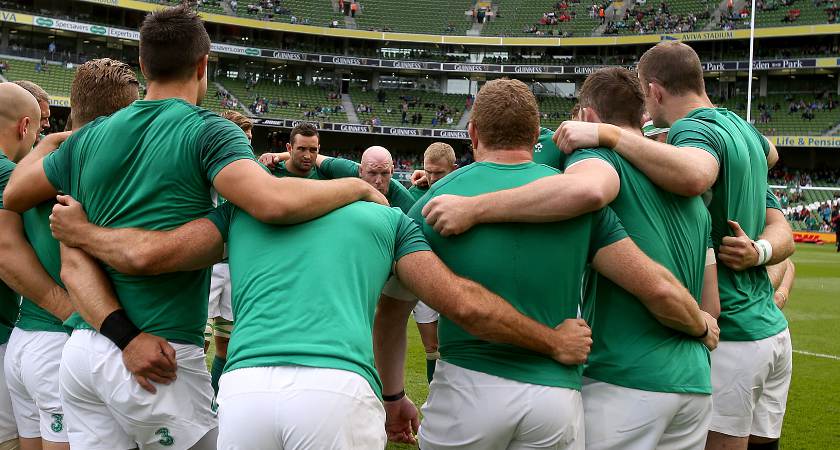 O'Connell addresses his team-mates before the Wales defeat [Picture: Inpho]
Schmidt, O'Connell, and all of Ireland could do worse than learn from their attitude. They could also learn from the French, who, in the course of the last month, have re-invented themselves.

Six months ago, Les Bleus were a team going nowhere and after losing to Wales in the Six Nations, Philippe Saint-Andre walked away from the battleground, sought refuge in his bunker where he kindly abdicated himself of blame, pinning it instead on his foot-soldiers.

It has been a consistent policy in his damaged regime, a reign which has seen the buck passed better than the ball and where a 42 per cent win ratio marks Saint-Andre out as the least successful coach in his country’s history. Rigorous self-analysis is not his style. Instead, on this February day, following a depressing defeat to the Welsh, Saint-Andre preferred to point the finger.

"We were like Father Christmas because of the number of gifts we delivered," he said. “International rugby is about combat, humility. But above all it’s a collective sport. We don’t need starlets. In rugby, the team is the star and we need champions. I didn’t see any champions, or not many.

“I only want players who are ready to go to the end of the world. If anyone thinks that international rugby is too difficult, then they have my telephone number. They can call me and I’ll take someone else."

True to his word, he has. Maxime Medard, Maxime Mermoz and Maxime Machenaud were dropped from his training squad for this World Cup, the first - and last - time he will go to the tournament as France's national coach.

Yet after a turbulent reign, where a return of four successive bottom-half finishes in the Six Nations is their worst run in the competition since the 1950s, and where Saint-Andre has engaged in endless rows with the Top 14 clubs, he believes redemption is near.

“Club rugby here has the relative economic power of football in England,” Saint-André said. "I have tried to change the system but I have not been able to get what I want. At Sale and Gloucester and Toulon, I had control. With the French job, I can’t control anything. But I knew it would be like this. You have to put up with it for three-and-a-half years just so you can have the three months around the World Cup to do a proper job. And I believe, I really, really believe that France can beat any team in the world. Seriously, honestly, yes I do.”

He has every right to. Ireland, their pool rivals, have never beaten France in World Cup rugby.

Will that record change on October 11? Until Saturday, you would have said yes. After Saturday, you are forced to think again. The much-maligned Saint-Andre is all of a sudden the happier coach, whereas the much-lauded Schmidt is the one with problems to solve after seeing Ireland lose to Wales and France beat England over the last two weekends.

Back at their controls, yet again, is Freddie Michalak, whose half-back partnership with Sebastien Tillous-Borde, looks superb, which makes us wonder why Saint-Andre decided to check out the form of 12 alternative combinations before he settled on this pair.

Finalists four years ago, semi-finalists in 2007, they have pedigree in this competition. Ireland do not.

“But you have to remember that there are 16 million people in Paris alone, 60-odd million in France," said Ronan O’Gara, the former Irish out-half, who now works as a coach with Racing Metro.  "We're so small compared to that, but then when you think of what all our teams have done for the European Cup, especially Munster and Leinster, we’ve reached the stage where the French teams really rate the Irish. They won’t overlook us."

They can’t. But the bottom line, after Saturday, is that Ireland cannot afford to overlook the French, either. Too many people in this country had started to do so.

Big mistake. Why does all this matter? Well, the reality is that whoever wins on October 11 will undoubtedly top Pool D and enter into a quarter-final with Argentina. And the losers? New Zealand and an early exit.