JIMMY HOFFA’S stepson, Chuckie O’Brien lived a tortured life for more than four decades after the disappearance of the Teamster union boss.

That’s according to O’Brien’s own stepson, Jack Goldsmith, who wrote in The New York Times about the “devastating” impact the various books, films and newspaper articles about Hoffa’s disappearance had.

Though he acknowledged his 86-year-old stepfather was “was the most intimate associate of Jimmy Hoffa” the FBI’s case against him largely relied on circumstantial evidence.

Worse still it led to be him being ostracised by the Teamsters union with the FBI refusing to publicise the evidence they had which exonerated him.

“Chuckie’s innocence in one of the most notorious crimes of the 20th Century remains mostly hidden, his guilt remains publicly presumed, his honour remains soiled,” Goldsmith explained in The New York Times.

Ahead of the release of The Irishman, O’Brien expressed concern to his stepson over the movie.

Goldsmith said: “Chuckie worried that Scorsese’s film would give his supposed involvement in the Hoffa disappearance a reality in popular culture that the prior books, headlines and movies did not.

“It turned out to be worse than he feared.”

Though acknowledging the film got some things right, he said that “beyond these surface truths, and despite the “true crime” feel, the movie is high fiction.” 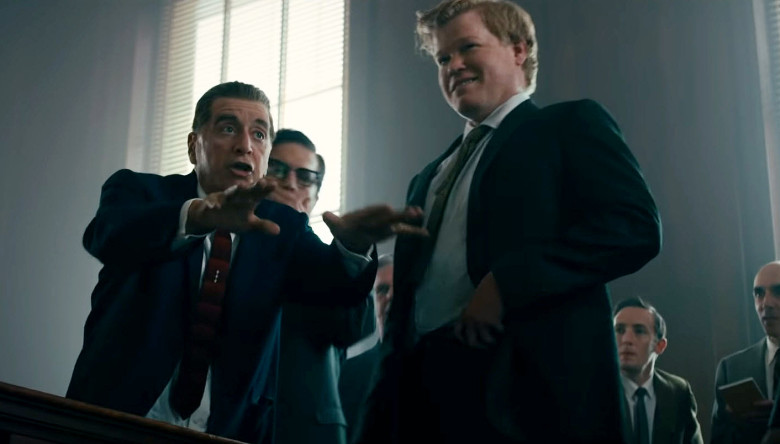 Jesse Plemons with Al Pacino in The Irishman

According to Goldsmith, O’Brien, who witnessed many of the purported incidents in The Irishman felt Scorsese’s film was “One of the greatest fake movies I ever saw.”

Goldsmith criticised the way his stepfather was depicted as a “dim jackass” by actor Jesse Plemons in the film and also hit out at “the movie’s portrayal of Mr. Sheeran’s closeness to Mr. Hoffa.”

“Chuckie expected to be ‘tagged with the disappearance’ in the movie, he told me,” he wrote.

“He did not expect Mr. Scorsese to appropriate his close relationship with Hoffa — the precious blood, sweat, tears and joy of a three-decade father-son relationship, the apex of Chuckie’s life — and give it to Mr. Sheeran for all the world to see and believe.”

O’Brien was also keen to stress to his stepson that he knows nothing of what happened to Hoffa, but is innocent of any wrongdoing.

The comments contrast those of Sheeran, whose personal account of events formed the basis of the true crime memoir I Heard You Paint Houses, by Charles Brandt which was the main source material for Scorsese's film.

In the book, as in the film, Sheeran claims to have been the one who killed Hoffa as part of an organised Mafia hit designed to silence the outspoke Teamster union boss once and for all.