BREAKFAST IS supposed to be the most important meal of the day.

So, you can understand why one woman was left livid after paying over the odds to a spot of avocado on toast - only to be presented with something altogether underwhelming.

Not only did Melbourne-based write Jess McGuire fork out the equivalent of €10 for her brunch-based treat but, upon arrival, she quickly discovered she would have to essentially put the dish together for herself.

Taking to Twitter, McGuire shared a snap of the meal presented to her: two small pieces of toast, a sliver of feta cheese, an avocado still in its skin and some salt and lime.

All completely separated out for reasons unknown.

This happened to me five hours ago and I’m still furious pic.twitter.com/0OXyhscz5y

"I'm not sure you guys will ever fully understand the level of annoyance I felt being handed this alleged 'avocado toast with feta' breakfast that cost $18 today," she wrote alongside the image.

"'Pretty deconstructed, isn't it?' I dryly remarked to the waitress, to which she smiled enthusiastically and nodded.

"What f***ing next, being handed an avocado seed and told to farm the land and grow my own crop over several years before returning to the cafe to finally enjoy my breakfast? *breathes deeply*

"I'm fine I'm fine this is fine eighteen dollars what a privilege there goes the dream of a mortgage lol the boomers were right."

The post soon captured the imagination of her followers on Twitter, racking up over 1,000 retweets and 5,000 likes in the space of a couple of days.

"How can they serve this and not be embarrassed. Ffs!" one fan commented.

"I'm so angry and I'm not even the person who had to eat it," another added.

Thankfully they do breakfast/brunch a little differently in Ireland. 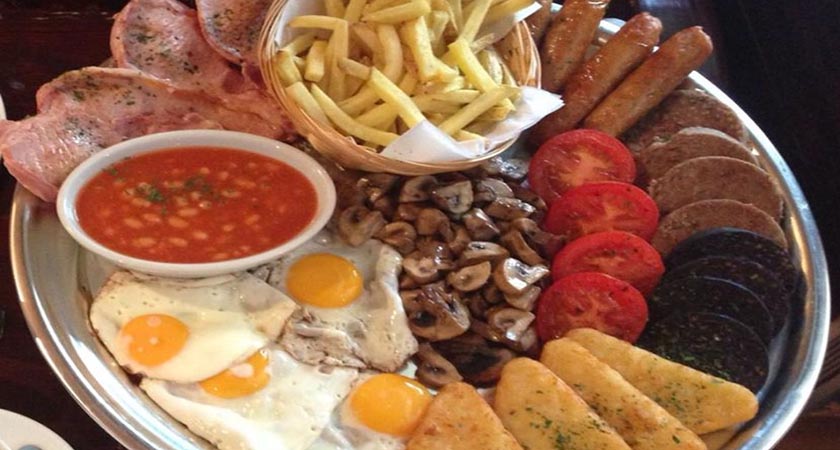 One for the gourmet — the Murphy's big breakfast

A few months back, for example, The Irish Post got wind of what is thought to be the biggest breakfast in the Emerald Isle.

Boasting a whopping 8,000 calories the breakfast is served at Murphy's Law in Athlone, and has already attracted Randy Santel, star of hit show Man V Food to pay them a visit.