CELTIC boss Ange Postecoglou said his side were not as clinical or as sharp as they should have been after a narrow 2-1 home win over Motherwell on Saturday.

The Hoops took the lead through Kyogo Furuhashi and struck the woodwork twice before a Josip Juranovic own-goal left the side's level at the break.

Reo Hatate restored the home side's lead midway through the second half but Celtic finished the game with 10 men after Callum McGregor's late sending off.

Despite the narrow victory, Postecoglou praised the character of his players as they moved back to the top of the Premiership.

"It was an important three points, particularly after the last result," the Australian told Celtic TV.

"It's a funny old game, we created enough chances to win it comfortably but a couple of self-inflicted wounds kept them in the game.

"It was great character shown by the boys to see the game out and get an important three points." 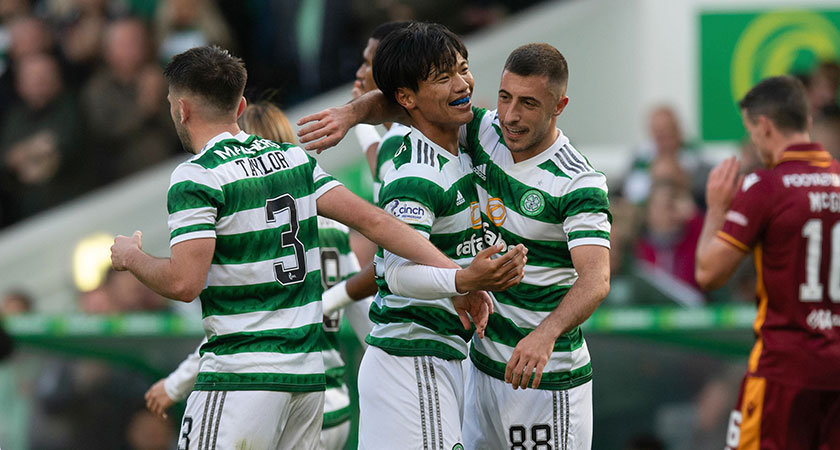 Josip Juranovic, whose own goal levelled the game for Motherwell, congratulates Reo Hatate on his winner (Image: Craig Foy/SNS Group via Getty Images)

He added: "It was a great goal [by Hatate] and he was unlucky with his strike in the first half as well.

"Like I said, we created chances but we just weren't as clinical and sharp as we should have been to take them and put the game away.

"But all in all, it's an important win and move on."

McGregor's suspension for the red card comes with the Hoops facing a congested fixture list.

Saturday's match was the first of 13 fixtures spanning 43 days, before club football is halted for the World Cup.

Celtic are also currently without first-choice centre-backs Carl Starfelt and Cameron Carter-Vickers, although the latter may be in contention for Wednesday's Champions League trip to Leipzig.

Celtic then travel to St Johnstone for a Premiership clash next Saturday, October 8.

'He gives everything for the team': Postecoglou praises Kyogo as Celtic defeat St Johnstone 4-1