Rory McIlroy was left red faced yesterday as a heckler sunk a shot that even he couldn't make. (Credit ©INPHO/Donall Farmer)

RORY McIlroy might be one of the best golfers in the world, but he's not above being taught a thing or two.

At a practice round in the run up to the Ryder Cup on Hazeltine Greens, Minnesota, Rory McIlroy and Andy Sullivan continuously missed the same shot.

The back and forth between the pair led a heckler in the crowd, David Johnson, to shout: "Even I could make that!"

Fellow Europe team-mate Henrik Stenson decided to make the heckler follow through - and invited him to sink the putt.

To make things more interesting, Justin Rose, who is also competing on the European team, put a $100 bill next to the ball. 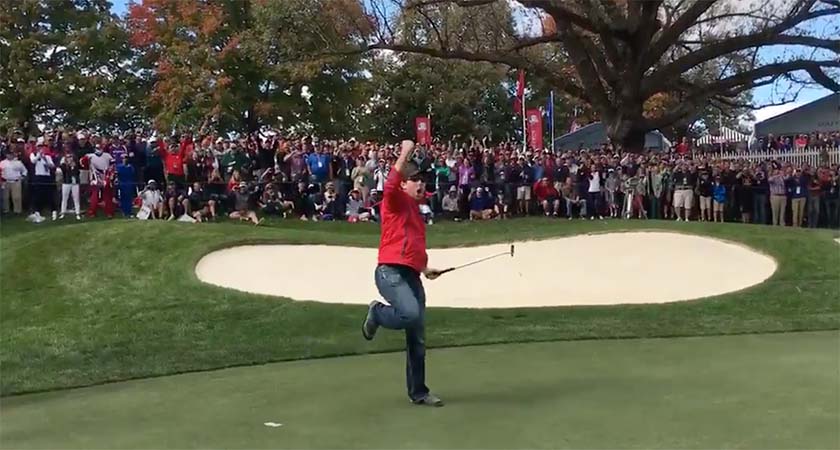 David Johnson celebrates after making the shot that neither McIlroy or Sullivan could make. (Source: Twitter/Rory McIlroy)

Sure enough, heckler Johnson gave himself a pep talk - "Home soil, right?" - and in his own words, "closed his eyes and hit the putt."

Much to everyone's surprise, he made the shot, and his reaction to beating the professional golfers is akin to actually winning the Ryder Cup for his country.

Rory McIlroy posted the exchange on his Twitter account, and quipped, "Has the Ryder Cup started already??"

McIlroy is the only Irishman to make the European team for this year's Ryder Cup, which tees off today.