Wexford actor Denise Gough stole the Best Actress crown at the prestigious ceremony honouring the best in British theatre, which was held at the Royal Opera House.

The star of People, Places And Things won the award for her role as addict Emma in Duncan Macmillan’s rehab-set drama – beating off fellow performers Nicole Kidman, Gemma Arterton, Janet McTeer and Lia Williams to take the title.

Elsewhere playwright Martin McDonough, whose roots lie in Co. Galway, scooped the Best New Play gong for his Hangmen production at the lavish ceremony, which celebrated forty years of the Olivier Awards. 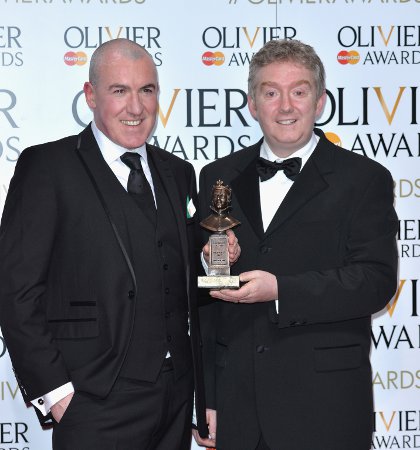 Fishamble's Pat Kinevane and Jim Culleton pose with their Oliver

Directed by Matthew Dunster, McDonagh’s black comedy tells the story of England’s second-best hangman and how his life changes when the practice becomes outlawed.

Irish theatre company Fishamble: The New Play Company and actor/writer Pat Kinevane were also celebrating on the night, after receiving the Outstanding Achievement in an Affiliate Theatre award.

The award related to their production of Silent – a one-man show written and performed by Kinevane at the Soho Theatre in 2015.

He was joined by director Jim Culleton to accept the gong, who said: “We are so thrilled, honoured, and delighted to have won the Olivier Award for Outstanding Achievement in an Affiliate Theatre for Silent.”

Irish President Michael D Higgins was among many to offer their congratulations to the Irish award recipients, stating: “The Olivier Awards are the most prestigious theatre awards in the United Kingdom and the awards won by Irish nominees are a great recognition and tribute to Irish theatre.”

Another highlight of the evening saw Dame Judi Dench – a second generation Irishwoman herself – receive her eighth Olivier, breaking her own record as the winner of the most individual performance Olivier Awards.

Dench was awarded Best Actress in a Supporting Role for her role as Paulina in Kenneth Branagh and Rob Ashford’s production of The Winter’s Tale.

The full Olivier Awards will be screened on ITV3 tonight from 11pm.