Stardust tragedy: On this Day in 1981, 48 people lost their lives in a Dublin nightclub fire

IN THE early hours of Valentine's Day 1981, hundreds of people were attending a disco in Dublin's Stardust nightclub. 48 of those people would never come home.

Today marks 39 years since the Stardust tragedy, which claimed 48 young lives and injured over 200 others.

Mystery and controversy still surrounds the events of Valentine's Day 1981, with the families of those killed still searching for answers.

What we do know is that hundreds of families were impacted by the events of the horrific fire, which began at approximately 1.30am on 14 February 1981.

Several people noticed the blaze breaking out at different times and in different areas, and the DJ reportedly announced there was a small fire in the building and asked people to evacuate calmly.

Several things went monumentally wrong: the lighting in the club failed, plunging people into darkness, and causing mass panic and resulting in some people being trampled.

Many people mistook the doors to the men's toilets as being the main entrance and were trapped inside with no way out, as the windows were secured with metal bars, making it impossible for firefighters to reach them even when they tried to pull the bars off using a chain and a fire truck.

Most worryingly of all, numerous fire exits were chained and padlocked.

The Dublin Fire Brigade, Gardaí, and ambulances from numerous services including Dublin Civil Defence, St John's, the Order of Malta and the Red Cross arrived on the scene to assist the injured, but the sheer number of casualties meant that some ambulances were taking in 15 people to one vehicle. 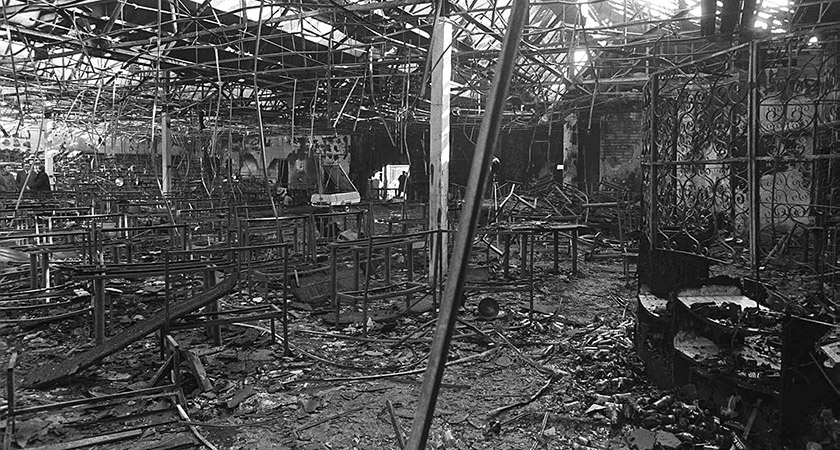 The aftermath of the deadly Stardust Nightclub fire in Dublin in 1981.

The services were so overwhelmed that radio stations had to appeal for locals with cars to attend the scene and bring people to be treated in hospital.

Despite the clear breaches of fire safety, the nightclub's owners never faced charges, and the families of the victims have never felt closure, particularly after an initial finding of arson was overturned in 2009.

In September 2019, however, the Attorney General confirmed that a new inquest would be held into the details which led to the loss of 48 young lives on Valentine's Day 1981. This has yet to happen.

The Stardust tragedy remains one of Ireland's worst disasters in modern history.

Today, the Dublin Fire Brigade wrote in rememberance of those lost, saying "We'll never forget the tragic fire at the #Stardust nightclub in the early hours of #ValentinesDay 1981.

We'll never forget the tragic fire at the #Stardust nightclub in the early hours of #ValentinesDay 1981. As ever, thinking of the families, friends, survivors & community at this sad time pic.twitter.com/nCokTfPZJs

"As ever, thinking of the families, friends, survivors and community at this sad time".