JOHN O' SHEA has has given an exclusive interview with FAI TV about life as an assistant to U21s Manager Jim Crawford's Ireland side, the difference between playing and coaching at international level, and being a winner of the European Championship at U16 level under Brian Kerr in 1996.

On the difference between playing and coaching at international level

"To get the chance to work with Ireland at any level is always amazing.

It's been a brilliant experience and a huge learning curve for me in terms of wether it's preparing for one game, two games or three games - whatever the camp may be.

That preparation and the details that are needed that go into a camp, with all the staff behind the scenes, that's been the real eye opener for me." 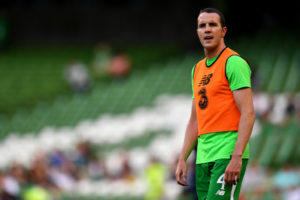 His highlight as U21s Assistant Coach"It would have to Sweden at home for me.

The late win gave everyone a huge boost in a sense that we knew we were putting in good work, the players and the staff were enjoying it, the vibe about the place was very good so to get that late goal gave everyone that boost that we can qualify.

Thankfully we were able to double down by winning in Sweden too."

What it would mean reaching an U21 European Championship 25 years after winning the U16 EUROs"With Brian (Kerr) and Noel (O'Reilly) we did incredibly well and those bonds with the players and staff remain. To think you have that chance to ignite that flame again for the country by qualifying for a major tournament would be brilliant.

It's a good test and a good challenge for us. The biggest thing is for the players to do themselves justice and if we can do that we can get that anniversary to match 25 years later."Republic of Ireland U21s are back in qualification action on Friday, June 3 against Bosnia & Herzegovina and on Monday, June 6 versus Montenegro.Thousands of Ireland fans have already taken up tickets for the final two home qualifiers of the campaign at Tallaght Stadium as the young Boys in Green bid for a place at next year's U21 European Championships.Tickets to the game are available here