THE ancient Irish were the first to record a solar eclipse 5,354 years ago, according to archaeologists.

A geometric etching illustrating the eclipse is believed to lie inside the Cairn L (one of the two large focal monuments on Cairnbane West) outside Kells in Co Meath.

The carving of concentric circles and lines is located at the back of the chamber of the cairn in an area covered in Neolithic ruins.

It’s one of the main focal points of the cairn, author Martin Byrne explained in his blog carrowkeel.

It is thought to have been etched on 30 November, 3,340 BC, which fits the dates of the 92 solar eclipses in history tracked by Irish archaeoastronomer Paul Griffin.

Experts at Astronomy Ireland have suggested that Neolithic astronomer priests made the carvings on stones and that it is likely the eclipse was viewed from the cairn. 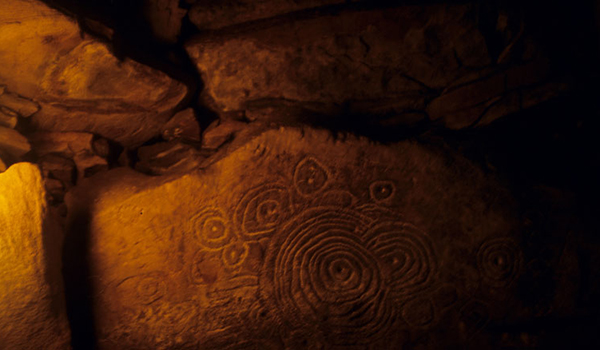 The ancient cairn has other unexplained features, including 18 decorated stones, one of which is a pillar stone known as ‘The Whispering Stone’.

The Whispering Stone is a thin limestone pillar around seven feet tall with carvings, and it is possible that the cairn was built around it.

When the sun rises, it hits the top of the tall stone and gradually illuminates the carvings at the back of the chamber, which contains the drawing of the eclipse.

In Ireland, the Cairn L is regarded as one of the more unusual chambered cairns due to The Whispering Stone and its complex layout.

The mound was first excavated in 1865 and discoveries of Neolithic artefacts, including two stone spheres.