Prince Charles, Prince of Wales holds a pint of Guinness he has poured as he stands next to Camilla, Duchess of Cornwall during a visit to the Irish Cultural Centre

PRINCE CHARLES and his wife Camilla, the Duchess of Cornwall were today given a crash course on all things Irish.

The royal pair learned how to pull the perfect pint of Guinness and also had a brief lesson on playing traditional Irish music during a visit the Irish Cultural Centre (ICC) in Hammersmith.

The royal pair were received by the Deputy Lieutenant for Newham, John Barber today who introduced them to ICC Chair Peter Power-Hynes and Culture Director Rosalind Scanlon.

In the foyer of the centre, the Prince and the Duchess learnt about the history and selection of art in the building from the Centre’s curator, Barbara Stanley.

The couple then toured the facilities, meeting groups that use and are connected to the ICC along the way. 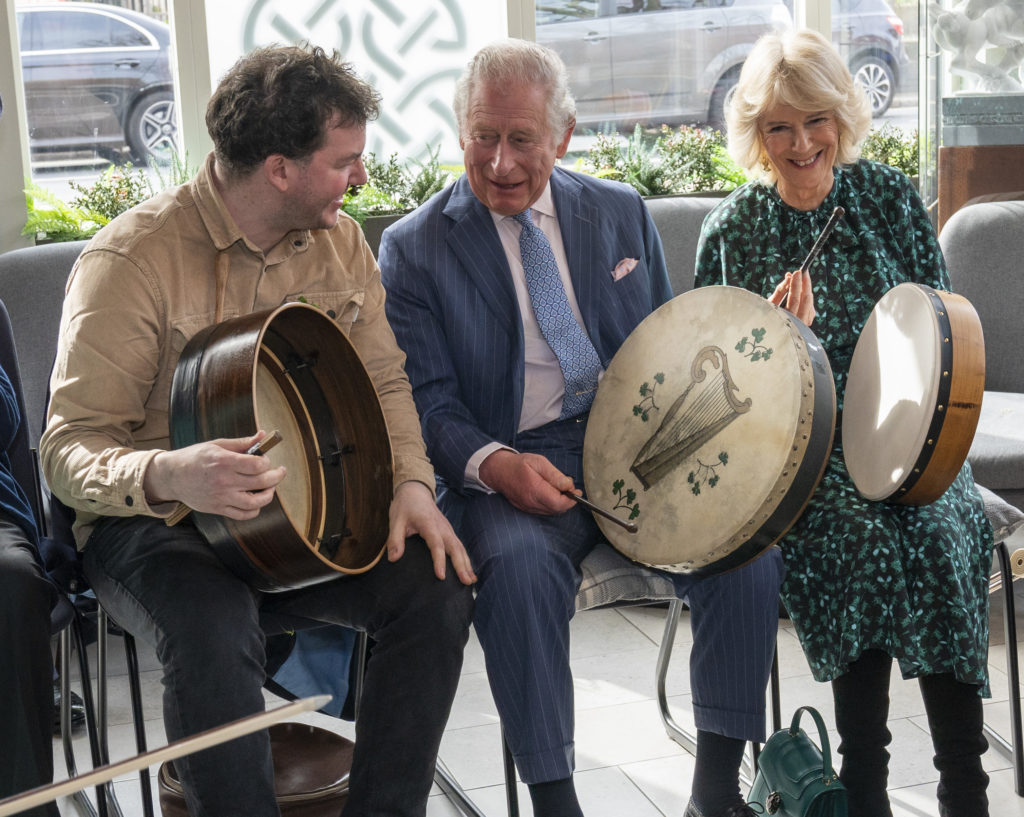 During their time at the centre they were invited to play the  bodhrán with the traditional musicians who frequent the popular cultural centre.

The Daily Express' Royal Reporter Richard Palmer tweeted a video of the pair in action on the drum - which showed they were more than engaged with the task at hand.

Prince Charles and the Duchess of Cornwall banging the drum for Anglo-Irish relations at @MyICCLondon this morning. pic.twitter.com/jZd5gpVYYY

Later on, while in the bar area, they pulled a pint of Guinness.

Upstairs in the centre, which is located in Blacks Road, the pair attended a singing class and a knitting class, both of which form part of the centre’s outreach programme.

Based in Hammersmith, west London, the ICC has been bringing the best of Irish culture to the capital for 25 years.

It became a registered charity in 2013, and in 2017 it opened a new state-of-the-art building.

The Centre boasts its own performance auditorium, delivers cultural events and performances across art forms including music, film, theatre, literature and visual arts.

This year, Prince Charles and Camilla will visit Ireland from Wednesday, March 23 to Friday, March 25.