Mayo and Kerry charged each other like armies who refuse to surrender, now they must go again

First, from Stephen Rochford came the relocation of Aidan O’Shea from his natural centre-forward habitat to man-mark Kieran Donaghy, a policy he persisted with even when it became clear to everyone else in Croke Park that it wasn’t working.

In the final analysis, Donaghy had a role in 2-5 of Kerry’s scores, while the loss of O’Shea’s ball-winning abilities around the midfield area exacerbated Mayo’s kick-out difficulties, particularly in the first-half.

Yet while Rochford defended his policy in the post-match press conference, he didn’t do so with much conviction, and suggested a review of this game may lead to a tactical readjustment ahead of the second instalment of this drama in five days time.

Asked if O’Shea’s removal from the forward line deprived Mayo of something in attack, Rochford replied: “Possibly.”

Perhaps he should have said definitely because certainly Eamonn Fitzmaurice felt he got out of Croke Park with a reprieve.

“In a sense we did,” Fitzmaurice, the Kerry manager, said afterwards. 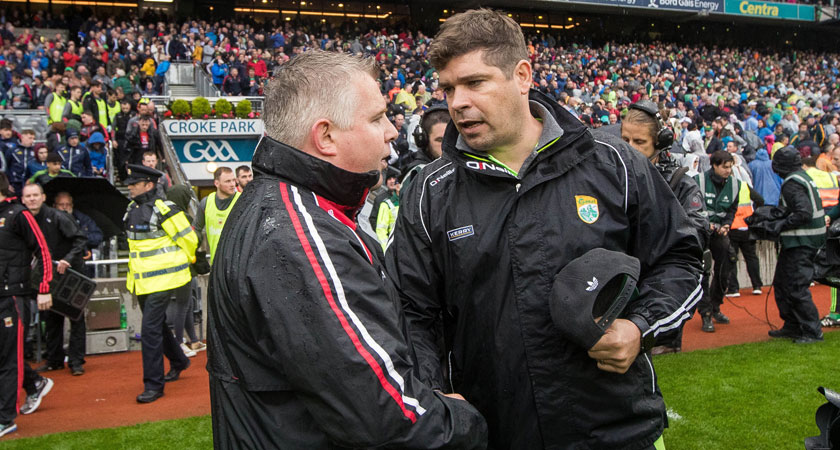 There isn’t a neutral complaining about that, though, because the entire country will want to see another chapter in this ongoing rivalry between the sport’s most successful county and the aesthetically pleasing, swift-passing, never-say-die men from the west.

What we got on Sunday was special – four goals, three comebacks and two big egos battling for supremacy on the edge of the square.

Then there was that free – right at the death – from nearly 50 yards to win it. Alas, Bryan Sheehan’s effort was poor.

But not much else about this game was. Tactically, yes, there were obvious mistakes from both managers, yet there was also evidence of their cleverness, as their teams shared four goals and 28 points between them.

Given how Mayo have been in every All-Ireland semi-final since 2010, and how Kerry have reached this stage of the competition every year since 2012, nobody should have been surprised it was still in the melting pot as we entered injury time. But the truth is that many of us were.

Mayo haven’t shown any consistency this season, spending their summer playing a form of Championship roulette against Derry, Clare, Cork and Roscommon, while Kerry were playing A versus B games in Killarney, the kind of inactivity that showed in the first half where their hesitancy in defence got exposed by a Mayo forward line who were uncharacteristically prolific.

Normally dependent on Cillian O’Connor’s free-kicking for their scores, they got 2-13 from play.

Yet somehow Kerry stayed in it, even though they had been outplayed in that opening half.

What helped was that when the game opened up, they were often scintillating in attack, inspired by Donaghy, the towering full-forward whose creativity often goes unnoticed, but whose presence resulted in Rochford deciding to use O’Shea as a man-marker.

In a way, you can see the logic as O’Shea, like Donaghy, has a big personality as well as a huge physical presence, and yet he lacked the defensive experience to contain a forward that has been unstoppable since 2006.

By the time Donaghy had created Kerry’s opening goal, there was a justifiable case for moving O’Shea away from the protectionist role and into a more creative position.

Yet it didn’t happen, not until Sheehan replaced Donaghy in the 73rd minute. By then, too much damage had been done.

Yet while this duel provided an intriguing sub-plot in the overall narrative, it wasn’t the only issue worth talking about. 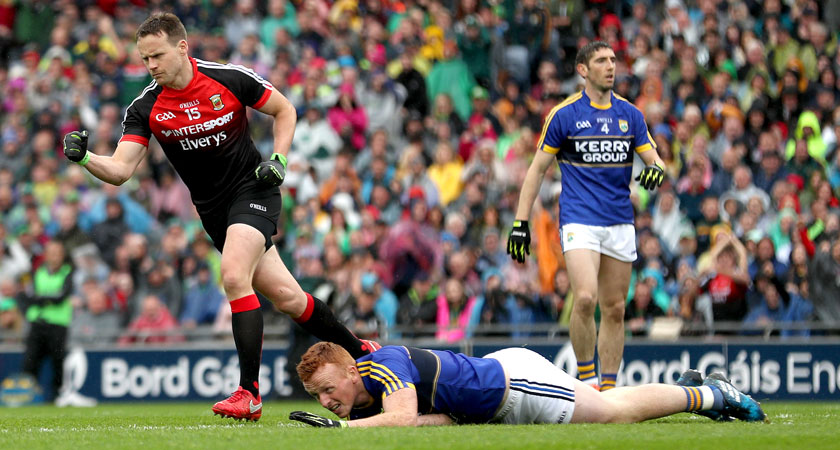 For starters, Andy Moran – the Mayo veteran – was immense, scoring 1-5 from play. At the other end Paul Geaney scored seven points for Kerry.

Essentially the two teams ended up bringing the best out of each other.

We saw Geaney, an effortlessly brilliant player, time his runs and his points brilliantly. For Mayo Lee Keegan was subdued, but Keith Higgins was not. David Moran excelled, but so did Tom Parsons.

It was a contest that felt like century-old warfare, two armies charging at one another until one was forced to surrender. Except that neither did.

Kerry went behind after Moran’s early goal but found a way back into the game. Then Mayo scored four points on the bounce to establish a three-point lead by the 43rd minute.

A pass directed at Aidan O’Shea went over the sideline. From the resulting sideline ball, Johnny Buckley eventually scored Kerry’s second goal, and a minute later, Geaney had a point, delivered after yet another dodgy kick out from David Clarke.

And all of a sudden the momentum Mayo had built just simply slipped away.

Yet there’s something about this Mayo soap-opera which keeps drawing viewers back for more.

After all their epic failures this decade, commentators have eulogised their spirit — noting how impressive they have been to recover from the spiritual devastation of the All-Ireland final defeats in 2012, 2013 and last year, and how they’ve constantly reached the last four, brought to a replay in three of their last four All-Ireland semi-finals.

As a team they simply don’t know how to give up and that was why four minutes after Paddy Durcan had hit one shot wide – the third successive attempt Mayo had missed – the same player was seeking responsibility to shoot in the fourth minute of stoppage time.

A loser would have hidden.

But this team aren’t losers. Even if Sheehan’s last-gasp free had sailed over rather than drift to the right of Clarke’s goal, you still couldn’t have thrown that accusation at them.

And yet if they are to win the big prize, they’ve got to make life easier for themselves. Perhaps they should try something radical, something like playing their best players in their best positions.

Who knows where that sort of innovation can lead to?