IT'S BEEN a change of era and hair colour for former Holby City actress Niamh Walsh in her latest role in Jamestown.

The Irish-born actress joins a stellar cast in the new Sky series from the producers of Downton Abbey.

It follows the lives lives of three women as they wrestle with the challenges of creating a new life in 17th century Virginia, in the English colony of Jamestown.

The settlement barely survived its first decade but is on the brink of change summoned by the arrival of a new governor and 100
so-called ‘maids to make brides’ – a bid from the presiding Virginia Company to establish the town as a prosperous place for all.

Verity, played by Walsh, arrives in Jamestown seeking deliverance from her troubled past, so when faced with Meredith Rutter the tavern keeper as a husband, she fears she’s made a terrible mistake in leaving England.

Rebellious, unabashed and vehemently opposed to injustice, she soon finds herself in conflict with the authorities due to her outspoken nature.

Here's what she had to say about her character... 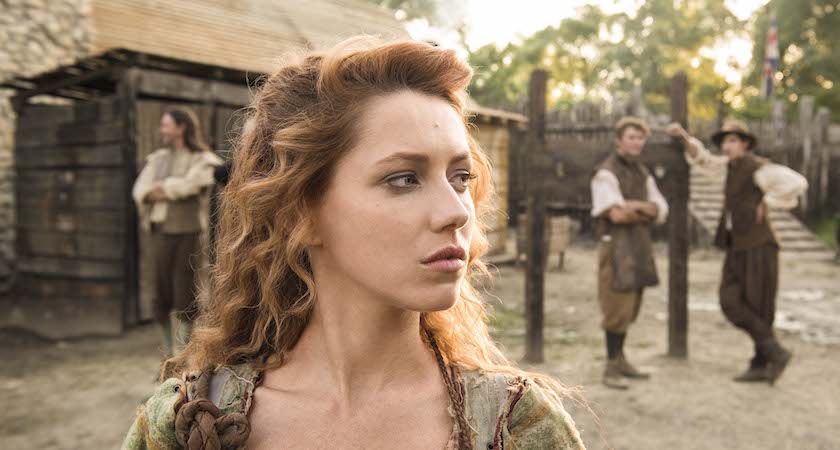 What is the relationship like between your character and Meredith?

Verity is a ballbuster. She is contrary and gobby and sarcastic. She calls her husband a ‘pustulous toad’ at one point. Dean (Lennox Kelly) and I have the best lines, I think.

Is there a sense that your character can reinvent herself in Jamestown?

That’s what Verity is trying to do. She is hoping desperately for a new start, and she turns up to find her new husband nailed to a post by his ear for misbehaving.

All three women are pinning their hopes on this brave new world, but of course it never works out that way.

The women all open up to each other about what went on in their lives beforehand. It’s a weird thing to do, to come out to this place, and you gradually learn why each of them has chosen to do so. It’s different for everyone.

What is Verity’s relationship like with the other two principal women in the story?

It’s a cool set-up because the story follows all three of them, they’re all on different levels of the social order. Verity is very much at the bottom.

She and Alice become friends on the ship over to America. And when they do all come across each other around Jamestown, there’s a real sisterhood and a real bond because although their circumstances have put them in very different positions in life, there is something that joins them together.

Is it difficult to put yourself in this situation as an actor because it’s so different from today?

That’s something that the writer Bill Gallagher has done so well; the attitudes and the characters are so relatable even though the circumstances are so different and archaic.

And even though they’re strong women, they’re kicking against a system that does not allow for that. You see how far below the men they are in this life.

How would you describe the tone of the show?

I like to think of it as a Western. There’s intrigue and politics and sex, but also it’s set in an outpost.

It’s really hot and there’s a shortage of food, and it’s so remote. It’s like a crucible with all this stuff going on. It doesn’t pull any punches. There’s blood and death.

And while the colony is this small thing, there’s the vastness of the land that surrounds them. The scale is huge with this little town in the middle of it.

How does the fact that it focuses on the women affect the drama?

Well, there is nothing soft about these women. It’s not a story that you’re expecting. It’s a violent world.

The first thing that you see as you come through the gates are the gallows, and then the graveyard. And the rule of law means that you get marched out of the gate and then hanged.

There is just the garrison. There is no law court.

How religious is the outpost at Jamestown?

The founding story of America is the Pilgrim Fathers, and that Christianity came first to America. But actually Jamestown was set up as a trading post for money.

We’re all here for money; it’s for the Virginia Company. We’re not here on God’s mission.

The community has a priest, but he is terrible! He is deeply troubled. He is desperately trying to impose religion on these people, but they’re here for the gold.

Are the costumes for the three women very different? Is yours a bit rougher, for example?

Lucy Wright who does the costumes is a genius. There are three different palettes for the girls. Jocelyn’s is very pastel and pale with opulent fabrics and plenty of gilding.

Alice’s is very practical with a lot of earth colours because she is a farm girl. Verity, meanwhile, is a real mix. I guess the thinking was that everything she owns she has stolen.

So often the stuff was very nice once. Lucy didn’t want to put me in rags. She wanted the stuff to have once been very fancy. And now it is full of holes because she has had to keep mending it.

Did you do a lot of research for this role?

I did. I love all that stuff. Bill used real people as the basis for some of his characters. And by reading books about the period you learn little things that even if the audience doesn’t see it, it adds to your performance.

What is Verity and Meredith’s position in Jamestown society?

They are near the bottom of the social order. Meredith often brings up the fact that during the Starving Time, when the colony was first established, they used to eat their wives.

Verity tells him that if she catches him trying to fatten her up, she’ll beat the daylights out of him.