THE large curtains of the Epstein Theatre in the centre of Liverpool are held back and the pre-show stage is set.

In silhouette we can see we are in a Liverpool Irish pub, complete with musical instruments set out for the session players and the Guinness pub light glowing like a beacon to customers.

Annie (Jackie Barker) enters mid-joke - which involved Viagra and a coffin lid - and the tone of the show was immediately set.

Throughout the play she bounds around the place - sometimes “walking”, sometimes “dancing” - with a music hall funny walk off to a tee.

Sporting an autumn leaf red wig and looking like a cross between Barbara Windsor and Maureen O’Hara, Annie is compere for the next two hours.

Throughout the piece we are introduced to Annie’s regulars, and the audience brims with anticipation as to who or what is going to come into the pub next and tell their story.

But Annie got in quick and told us first of her Dublin origins, taking a note from Patrick Kavanagh’s Raglan Road in her own tale of unrequited love as she told her story in Irish Annie’s Song. 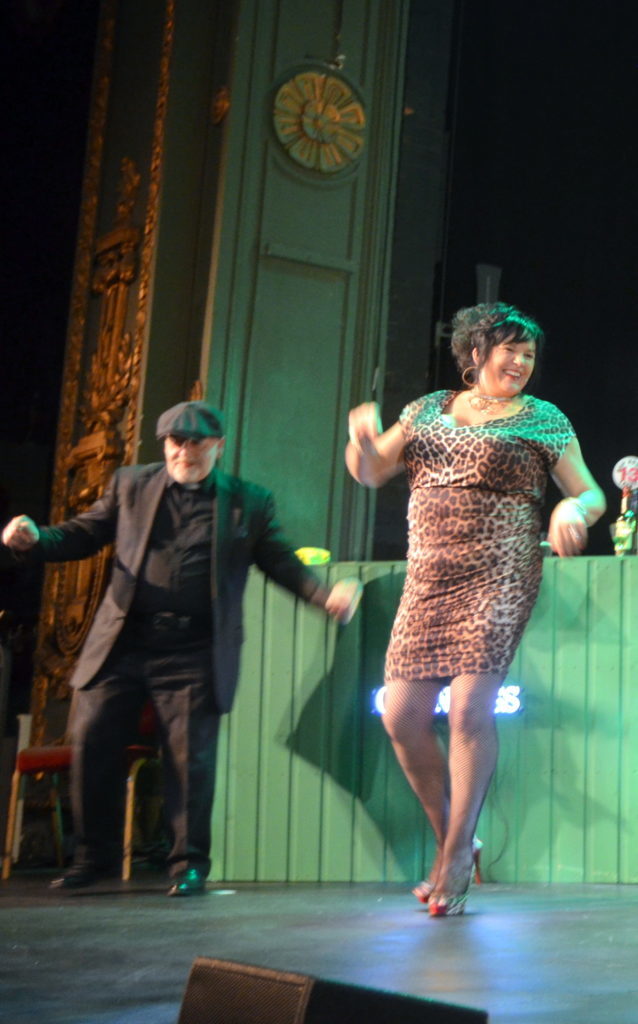 Annie in full swing at the Epstein Theatre, Liverpool

This was one of six original ballads written by Asa Murphy for the musical.

One of my other favourites from the show was I Love Galway Bay.

These ballads were greatly enhanced by the contribution on flute and whistle from Paul Thomas.

Annie’s Bar is the brainchild of Irish-Liverpudulian Asa Murphy, whose family originate from Cork.

Murphy spent years going to school in Mitchelstown and some of his siblings still live in Co. Cork.

He has been a professional entertainer for fifteen  years and has performed all over the world.

In the UK he has topped the bill at London’s Ronnie Scott’s and sold out the Liverpool Philharmonic Hall and the Empire Theatre many times. 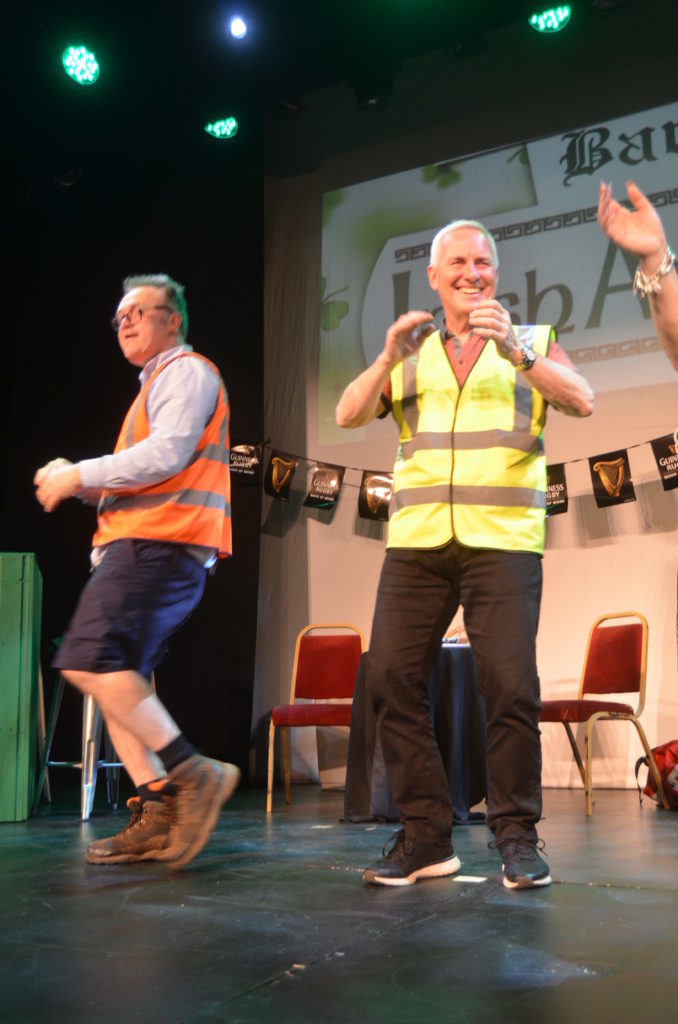 Fun for all at Irish Annie's (Pictures: Gerry Molumby)

He also hosts a weekly show on BBC Radio Merseyside, which is broadcast every Sunday.

Irish Annie’s is the latest of the many musicals that Murphy has written, which include Buddy Holly Lives and Mack The Knife the story of Bobby Darin.

Watching shows like this you are inclined to make comparisons to other similar theatre and TV shows.

When Scouse Pete (Lennie Anderson) entered Annie’s Bar, complete with his “council high-vis jacket” it was clear he was going to be the pub comedian.

Looking not too unlike Dave Spikey from Phoenix Nights, Pete took to centre stage and did his routine.

He engaged fully with the audience and was comfortable in talking back to them.

His best joke of the afternoon was his uncle in Ireland who left him ‘Feck Hall’ and he is busy trying to find where it is!

Father Squify (played by the affectionately known Little Ken) is a parody of a younger Father Jack from Father Ted before he went over the edge and is the best dancer in this show.

Noel Smithe played by Sam Conlon is on stage throughout and literally holding up the bar, asleep, other than waking up from being a ‘resting actor’ to recite some stanzas from Shakespeare.

I did not expect that in the second half he was going to come centre stage and sing.

His tenor voice and pacing of the narrative of Danny Boy was worthy of the standing ovation he received.

A moral tone was brought into the play with the entrance of local money lender Moria (Pauline Donovan). 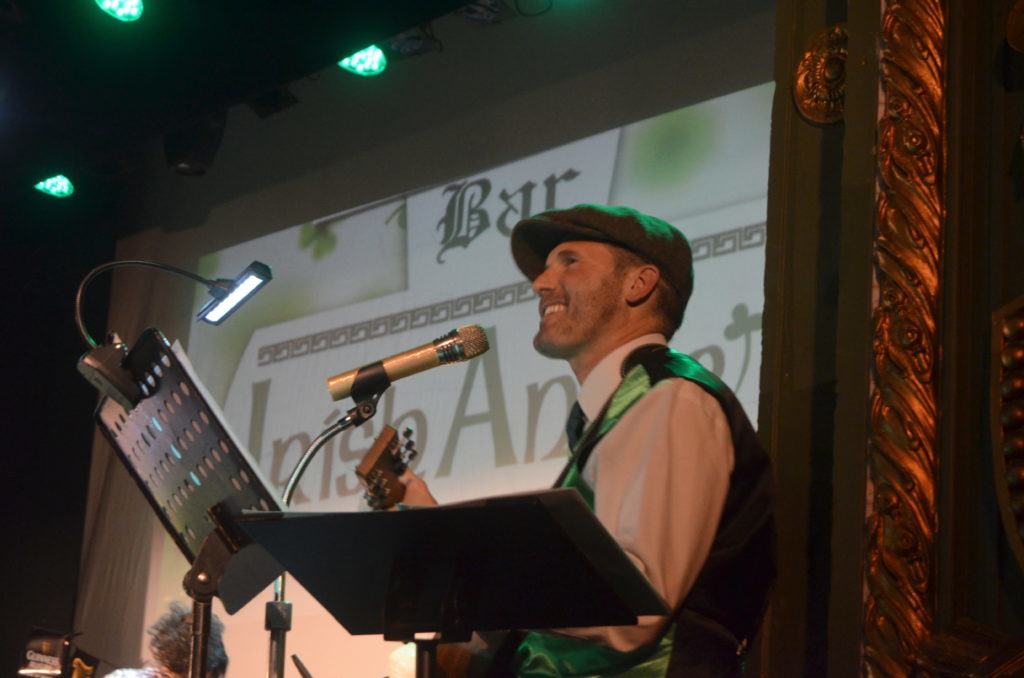 In fine voice, her demands for payments from the customers is brought to a swift halt when Annie comes to their rescue with mobile phone evidence of Moira in a “compromising position”, quite literally, with the local butcher.

“You and Jimmy were not selling sausages,” she says.

The theatrical slapstick funny walk was taken to another level by Porky the Postman, played by Nathan Murphy.

His singing and narrative of Knowing Elvis added an element of pathos defused only by the fellow customers allowing him to “live in his own world”.

Throughout the show Annie encouraged the audience to join in her Irish party and sing-along with the band; led by the show’s writer, composer and producer Murphy.