IVANOV is one of two productions by the Gavin McAlinden-led Acting Gymnasium which has run on alternate nights throughout November at Camden's Theatro Technis.

McAlinder, who hails from Co. Armagh, has well-established directing credentials having steered the acclaimed British premier of Frank McGuinnes’ Gates of Gold, which registered Critics’ Choice picks in The Sunday Times and London’s Evening Standard among others.

Ivanov being a rare revival of Anton Chekhov’s early work, it’s probably worth reminding readers of the plot.

The story centres on the title character (played here by Alexander Neal) – a self-loathing man on the cusp of middle age who has fallen out of love with his tubercular wife Anna (Clare Langford).

Ivanov regularly escapes to his neighbours – the hard-drinking Lebedevs – to whom he is in substantial debt.

Any guilty feelings the protagonist feels about leaving his dying wife are heightened twofold: first, by the advancements of Lebedevs’ young daughter Sasha (Kathryn McCartin), which Ivanov does little to avoid; and by the ‘good’ Doctor Lvov (Matthew Howell), who pours shame on the lead’s already self-tormented soul.

After Anna catches Ivanov in a tryst with Sasha, he’s widely suspected of being a cheat and a money-grabber. 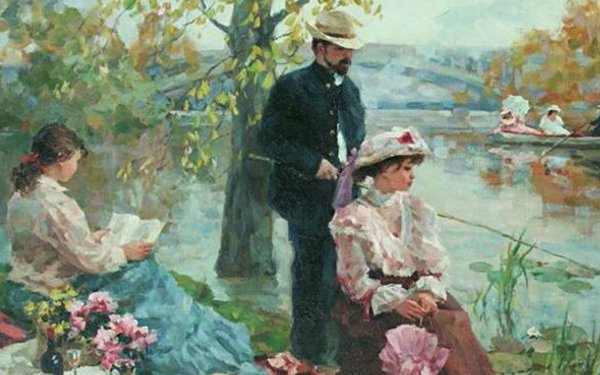 Take nothing away from the strong support roles played by members of the Gymnasium – who added dashes of well-timed colour to what can be a dreary tragicomic tale – but it’s the foursome of leads who truly excel.

Both Neal and Howell deliver terrific performances. Meanwhile McCartin, who is from Antrim, along with Langford, from Limerick, deliver their lines in their native accents. This might seem risky but it’s in fact a very plausible move.

After all, the similarities between the Irish and Russian temperament are plain: fiery passion, stoicism, and of course pitch-black humour. It serves to add power to both performances.

Perhaps it’s surprising then that, on the night we attend, the Technis (unlike a glass at the Lebedevs’ raucous party) was less than half full.

But again this, along with the sparse set design, if anything seemed to lend  more of a stripped-back feel to the show and further increased the production’s authenticity.

Ivanov ran until November 23 at Theatro Technis in Camden.

The Acting Gymnasium's  next production is The Playboy of the Western World by Irish playwright John Millington Synge. It takes place at the Corrib Rest pub in Kilburn from  14-19, January, 2014. Performances feature a live Celidh band.