IRISH (or Gaeilge) is one of Ireland’s two official languages, yet there’s a lot we don’t know about it.

Generations of students have complained about being forced to learn it, protesting that English is much more useful in today’s globalised world.

What they might not understand is that there is much more to the Irish language than meets the ear.

Here are 15 facts that may just surprise you...

1. Irish is one of the oldest living languages in Europe

It’s an Indo-European language, which means that it evolved from the earliest human languages that were spoken in the Middle East.  Its first speakers were early farmers who are believed to have arrived in Ireland as early as 4500BC.  They mixed with the hunter-gatherers that were already here and modern-day Irish developed from the language that they spoke.

2. Irish wasn’t always confined to the island of Ireland

By 500AD, it had begun to spread through Scotland, the west coast of Britain and the Isle of Man.  In fact, the Gaelic spoken in Scotland today descends from the Gaeilge of Ireland.

3. Irish uses the Latin alphabet but it doesn’t use all the letters

J, k, q, v, w, x, y and z are left out.  However, this doesn’t mean you won’t see these letters used in modern-day Irish words.  As new words are incorporated, the rules of spelling change.  For example, a vote is now written vóta although purists might have something to say about that!

4. Irish vowels can be used in two different ways

They can be written with or without an acute accent (a fada).  This means that an A or a can also be written as Á or á.  The word fada translates as 'long' and that’s exactly what the accent does to the vowel.  It gives it a longer, more stressed sound.  For ú: think ooh. And for u: think uh.

However, just because they can speak it doesn’t mean that they do.  Only 82,000 people in that same census said they spoke Irish outside of school.  When you consider that 119,526 said they spoke Polish on a daily basis, it doesn’t say much for Gaeilge's standing as an official language. 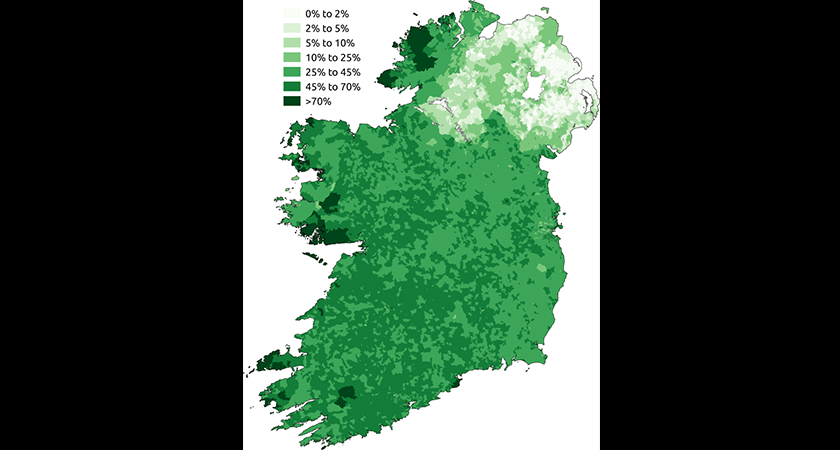 Proportion of respondents aged 3+ who said they could speak Irish in the Ireland census 2011 (Picture: Wikipedia/SkateTier)

6. Students often complain about how difficult Irish is to learn

Yet they fail to understand that they have already mastered the much more complicated language of English.  They don’t realise that while Irish has eleven irregular verbs; English has more than 370!

7. But that’s not to say that students don’t have a point

The word order in Irish is verb, subject, object.  This means that 'I thought I saw a bird' would be translated as 'Thought I saw I a bird'.  This word order is very rare as only 9 per cent of the world’s languages use it.

8. The first letters of nouns can change in Irish

9. Irish has been greatly influenced by other languages

The Vikings brought words from the Norse such as pingin (penny), bád (boat) and trosc (cod).  The rise of Christianity meant many Latin words entered the language.  We wouldn't have words like 'anam is corp' (body and soul) without it.  French came to Ireland through the Normans who brought words such as garsún (boy).  And we’re not even going to mention the number of English words that have been incorporated into Irish.

10. The influence has gone both ways

From boycott and brogue to craic, hooligan, slob and even Tories; the Irish haven’t been slow to make their mark on the English language.

11. The Gaeltacht is the name given to small communities, mostly along the west coast, where Irish is still the main language of communication

There are Gaeltacht areas in Donegal, Mayo, Galway, Kerry, Cork, Meath and Waterford.  100,716 people live in these areas and 35 per cent of them speak Irish every day.

12. It’s become something of a tradition for schoolchildren from outside Gaeltacht areas to attend Irish-language courses in the Gaeltacht during the summer holidays

Every year, approximately 28,000 teenagers do this, staying with Irish speaking families, improving their cúpla focal and mastering jigs and reels at the céilí dances in the evenings.  Lots of them have their céad póg (first kiss) at these summer colleges too.

13. You’ll be surprised to learn that Irish is spoken in a certain part of Ontario in Canada

Here, you’ll find Gaeltacht Thuaisceart an Oileáin Úir (or the North American Gaeltacht).  It’s the only Gaeltacht that exists outside of the island of Ireland.  Irish emigrants fleeing the famine settled here and managed to keep their language alive, eventually going so far as to declare themselves a Gaeltacht in 1994. 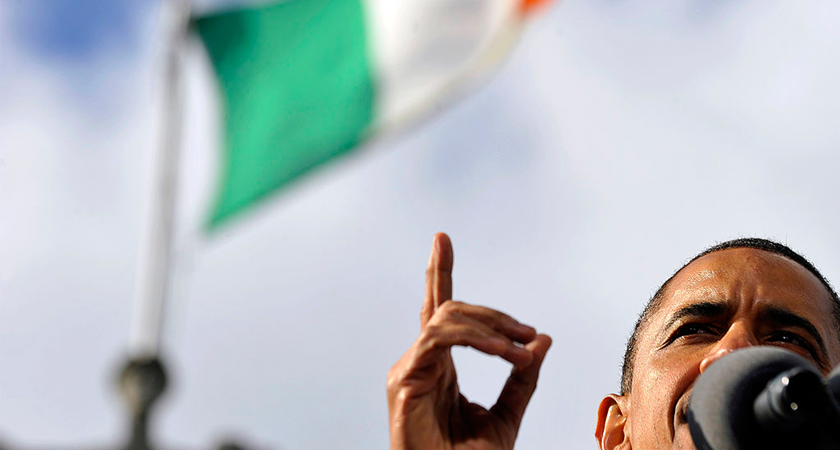 14. Irish people love it when foreigners speak a few words of their native tongue

Queen Elizabeth melted hearts when she opened her speech at the state dinner given in her honour at Dublin Castle in 2011 with a 'cúpla focal' (couple of words).  The Irish fell even more in love with Barack Obama when he uttered 'Is féidir linn' (the Irish for his famous phrase: 'yes we can') when he spoke on College Green that same year.  Even the ultimate English gentleman himself, Stephen Fry, tried to twist his tongue around Gaeilge when he appeared on the Irish language soap Ros na Rún playing a foreigner practicing his Irish.

15. Irish surnames become much easier to understand once you speak a little Irish

The ubiquitous O' (as in O'Connor, O'Sullivan or O'Malley) comes from the word ó and means descendant of.  In Irish, Ó is used only by males and the female equivalent is Ní, which means daughter of. Mac means son of while Nic means daughter of and Fitz (as in Fitzgerald, Fitzsimon and Fitzpatrick) comes from the French fils, which also means son of.  You can blame the Normans for that one.