Renewing your Irish passport is now easier, faster and requires no paperwork

A LITTLE over a year ago the Irish passport office launched a new service allowing their customers to renew their much treasured identity document online.

Within 12 months some 200,000 Irish people located across the globe had opted to use it - avoiding the paperwork and post office queues that we traditionally associate with keeping that little red book up to date.

And 18 per cent of that figure, or roughly 36,000 applications, have come from Britain, meaning that the Irish living here are already benefitting from the new service, which was made possible through a multi-million euro investment by the Irish Government.

In 2015 the Government committed €20million to overhauling its technologically dated passport service offering.

The online renewal service is the first publicly visible product of that, Fiona Penollar, Director of the Irish Passport Service, told The Irish Post this week. 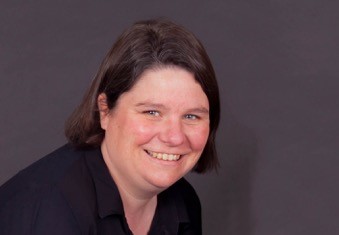 “In 2015 the Government launched an overall reform of the passport system, committing €20million to it over four years,” she said.

“Online adult renewals is the first visible product of that, although there have been other developments in house since then too and there will be more visible products to come – including the launch of child renewals at the end of this year and, eventually, full initial online applications, although that is not expected for another five years or more.”

And the adult online renewal system is already proving a hit with passport service staff and customers alike.

“We launched the online renewal service last year, on March 31, 2017, and since then we have had 200,000 applications made using the service, 18 per cent of which have been from Great Britain” Ms Penollar confirmed. 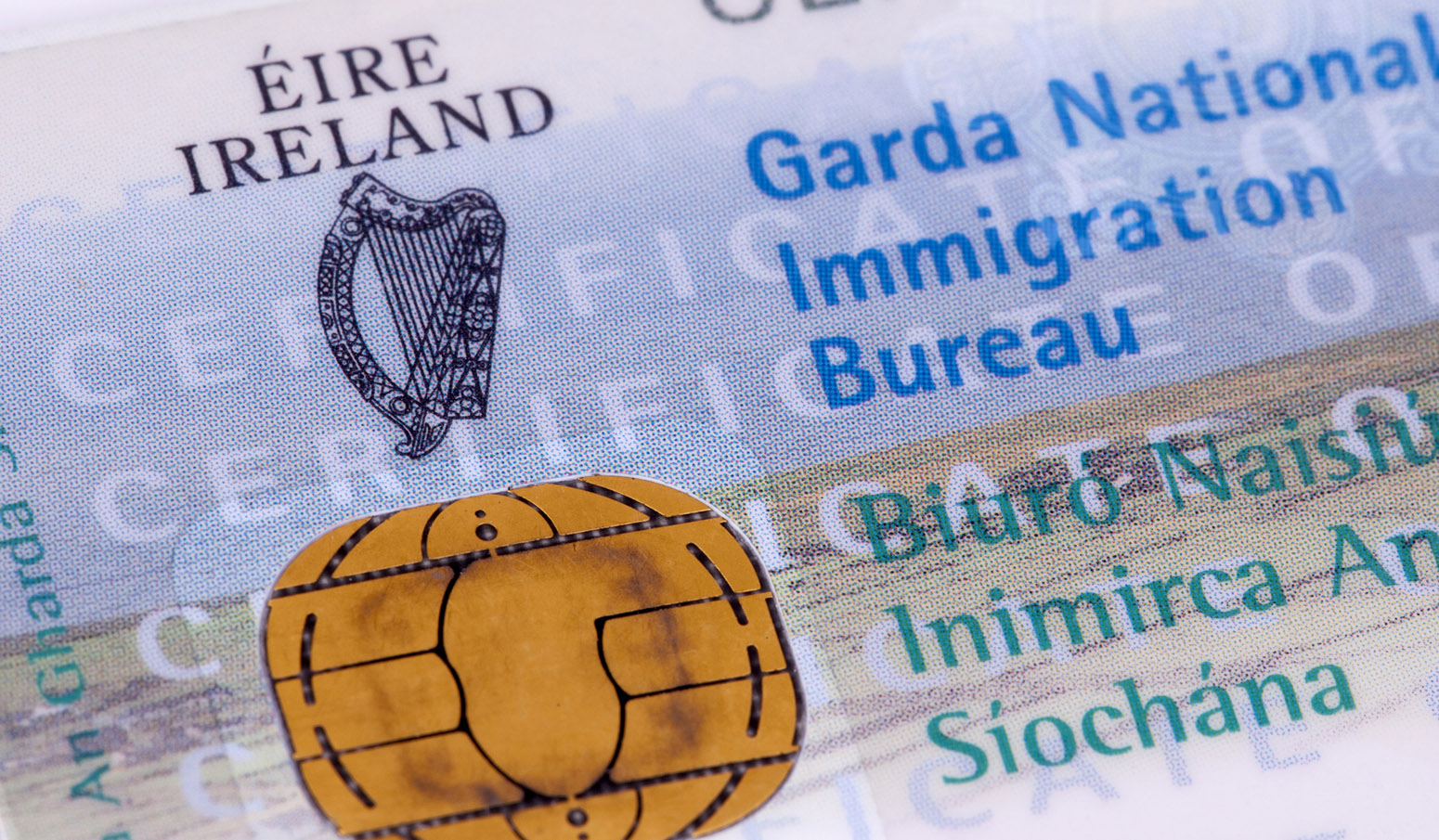 “Obviously it’s for adult renewals at the moment, and 200,000 is about 25 per cent of our overall volume, but yes, people are certainly seeing the benefits, the ease and convenience of being able to renew their passport online.”

She explained: “The main benefit they’re seeing is in turnaround time. 50 per cent of online renewals receive their new document within a week, and 100 per cent are received within two weeks, regardless of where they originate from.

“Traditionally you may have had around a six week wait for a renewal application, so it’s much much faster.”

She added: “The speed and efficiency of making the application is also a huge bonus for customers. Doing it all online means you don’t have to go and get the passport forms, fill them out and post them, it’s all there at your fingertips with online renewal.

“And from the point of view of the passport office staff, the online renewal system has been of great benefit - as it is four times faster to process an online application than it is to process a paper one. This allows us to focus those resources on other areas which need it.”

Currently available to eligible applicants aged 18 or over, the online renewal service prides itself on being quick and easy to use.

In order to make the application you simply need internet access, a digital photograph of yourself, a valid email address and a credit or debit card with which to pay the renewal fee.

The photo, which must still be taken against a white background, can be taken by your usual passport photo provider, as long as they can provide you with a digital version of it.

Alternatively, you can have the photo taken at home - provided you can stand against a white background – although this does still require having someone to take the photo, as selfies will not be accepted. 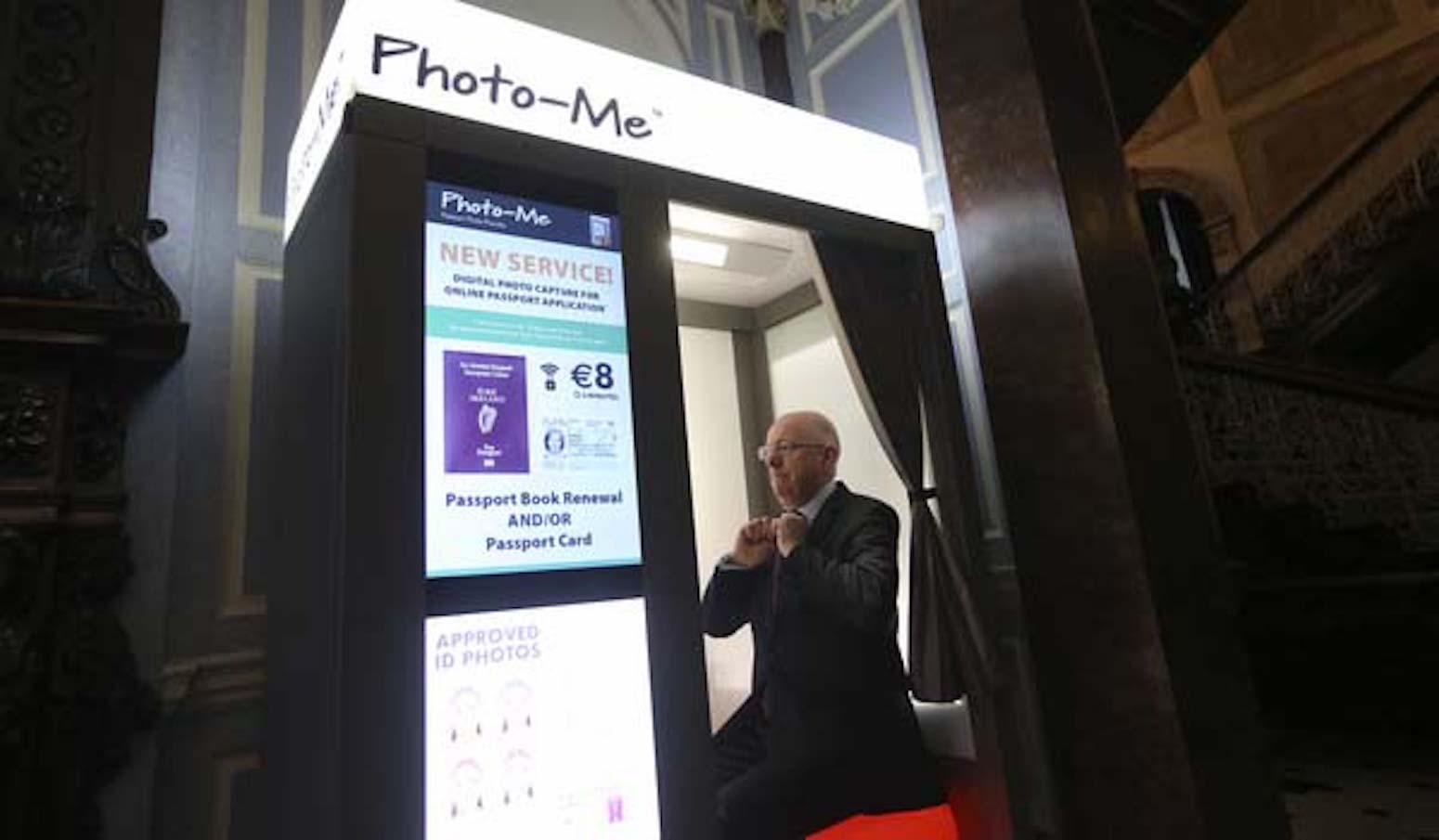 A third option is to use a Photo Me or DLK photo booth.

The Irish passport service has an agreement with both companies, which operate photo booths across Ireland, Northern Ireland and Britain, which means you can take your photos in the booth and receive a code to upload when you are making your online renewal application that will fetch your photo for you.

With the system now so streamlined, it really is possible to sit at your computer and complete your renewal application in a matter of minutes, according to Ms Penollar.

“It should only take you between five to ten minutes really,” she said, “unless you are less familiar using a computer, which may mean it takes a little longer.”

So popular is the system becoming that the Irish Embassy in London recently organised a series of passport information sessions in Irish centres across Britain to introduce the online renewal concept more formally to the community here.

The sessions, which took place from mid-June to mid-July, were organised in partnership with Irish community organisations in 14 locations across Britain, including centres in Scotland, Leicester, Birmingham, Newcastle and Portsmouth.

“We encouraged all Irish community organisations to attend a passport information session nearby. In each location a number of different organisations were represented,” an Embassy spokesperson told The Irish Post.

“We estimate that approximately 37 Irish community organisations were represented at a passport information session. Approximately 114 people attended the sessions in total.”

The Irish Ambassador to Britain, Adrian O’Neill, is also a fan of the new service.

“I am delighted that so many of our community in Britain have taken advantage of the new passport online application system,” he told The Irish Post.

“It is a fantastic facility that offers a quick and hassle-free option for passport renewal. To all adults due to renew their passports soon, my message is save time – renew online.” 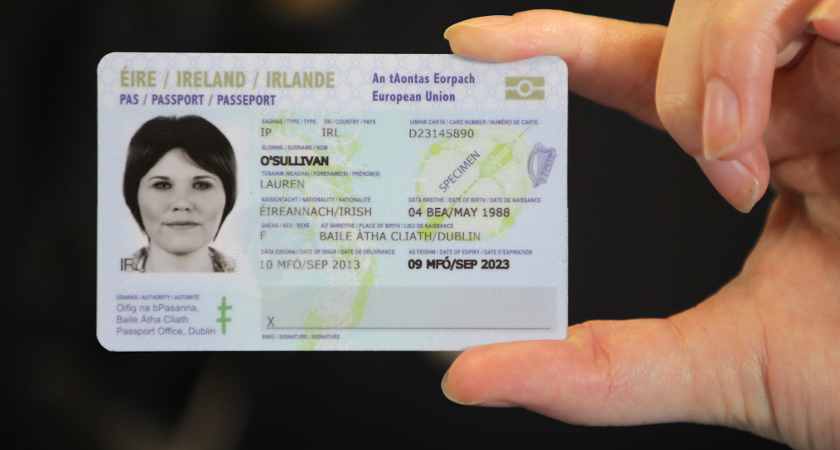 As well as renewing your Irish passport, which currently costs €80, you can also order a passport card through the online system.

The credit card-sized identity document is effectively a passport that’s valid for travel in the European Union, Switzerland and the EEA.

It is accepted as a formal identity document by all airlines, meaning you can leave your more traditional passport book at home.

“We find for people who do a good bit of travel, who are only going to travel in the EU, where they like to have the card and leave the book at home, and for people who use their passport for non-travel related purposes, such as age identification and that kind of stuff, the passport card is very handy for them,” Ms Pennolar explained.

“Having it sitting in the wallet, rather than a passport book in your handbag or back pocket, which could easily go missing, is just much easier at times.”

Ordered alone the passport card costs €35 or if purchased with an online passport renewal the passport office offers a bundle price of €105.

With such passport power now at your fingertips, the inevitable question is will there come a time when all passport applications will be done online, making the paperless system redundant?

It’s certainly a possibility, according to Ms Penollar.

“I suppose we are looking at different options of having a paperless system at some point in the future,” she admitted.

“We will never say that everyone has to go online, as we are very much about options and choice.

“I think it’s more likely that it will be people applying through agents if they are not comfortable going online, an assisted application type of thing,” she added.

“We are very much still about the choice, but it is moving away from the paper because it is inefficient and it can lead to confusion – that is one of the biggest problems with the paper. “The one form fits all can lead to confusion for people. When you apply on paper you try to offer a catch all for everyone, so, a box for all possible answers.

“But the online process can very much be tailored towards you personally, where the form has to try and cover everything and can never do it as well.”

For further information or to renew your passport online click here.