FORMER IRISH president Mary Robinson has admitted she was duped over the wellbeing of Princess Latifa of Dubai when she met with her following the young royals attempted escape from the country.

Several days into her escape, when the boat was nearing the shores of India, it was raided by UAE commandos and the Princess was forcibly removed and returned to Dubai, according to a BBC Panorama documentary that aired on Tuesday night.

Appearing in the programme, Mary Robinson details how she was misled during a lunch with the royals in 2018 into believing Princess Latifa had bipolar disorder and needed psychological treatment following her traumatic escape.

“I was misled, initially by my good friend princess Haya, because she was misled,” Ms Robinson said.

The princess, who is reportedly confined to a house with thirty armed police guards, managed to obtain a smartphone from which she recorded videos – shown in the BBC Panorama documentary – detailing the conditions of her captivity.

Phone camera footage shows Latifa speaking softly from a bathroom "because it is the only room with a door that I can lock”, she said.

Describing her predicament, she says: “I’m a hostage, I’m not free. I am imprisoned in this jail. My life is not in my hands.”

As a former UN High Commissioner for Human Rights, Ms Robinson was called upon to attend a lunch with the princess and her family in December 2018 to satisfy growing international concerns over her safety.

While those closely affiliated with the Princess Latifa claimed she had been abducted and forcibly returned to Dubai following her attempted escape in 2018, Ms Robinson accepted the account told to her at the time – that the 34-year-old royal was suffering from bipolar and post-traumatic stress disorders.

After meeting the girl and posing with her for “proof of life” photographs, Ms Robinson released a statement describing the princess as a “troubled” and “vulnerable” young woman who regretted her escape and was now getting the medical care she needed. 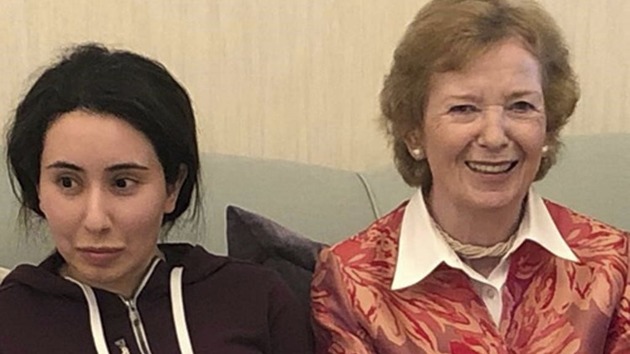 In footage shown by the BBC programme, the princess revealed how she was tricked into attending a lunch with Ms Robinson and her stepmother, Princess Haya bint Hussein, in 2018.

The latter had assured her that the lunch would be a “test” to see if she could behave in public, and though Princess Latifa sat next to Ms Robinson, she was unaware of who she was.

Explaining what in retrospect was a missed opportunity to enquire about the woman’s welfare, Ms Robinson, who is a staunch champion of women’s rights, said that she “didn’t know how to address somebody who was bipolar about their trauma.

"And I didn’t really actually want to talk to her and increase the trauma over a nice lunch”.

When photos of the former president and the princess were published by UAE media sources, Ms Robinson told the BBC that she realised she’d been “horribly tricked”.

The pictures were meant to be circulated privately, as evidence that the princess was alive, Ms Robinson went on to disclose.

Ms Robinson has since claimed that she has no friendship ties with the UAE leadership, except for Princess Haya “who is still my friend”, she told reporters in Dublin in 2019 according to the Irish Times.