NEW YORK, NY - AUGUST 30: Conor Niland of Ireland returns a shot against Novak Djokovic of Serbia during Day Two of the 2011 US Open (Photo by Matthew Stockman/Getty Images)

Conor Niland has hit out at the tennis infrastructure in Ireland and says it is preventing the best young talent in the country breaking through.

The 37-year-old Limerick man, who was as high as 129 in the world rankings at one point and played Novak Djokovic at the US Open in 2011.

He has been retired since 2012 but he still holds the title of being the last Irish player to feature in a Wimbledon main draw. As it stands, there is no Irish player in the top 600 of the world.

And Niland highlighted the lack of domestic tournaments and clay courts across Ireland as particular areas of concern. 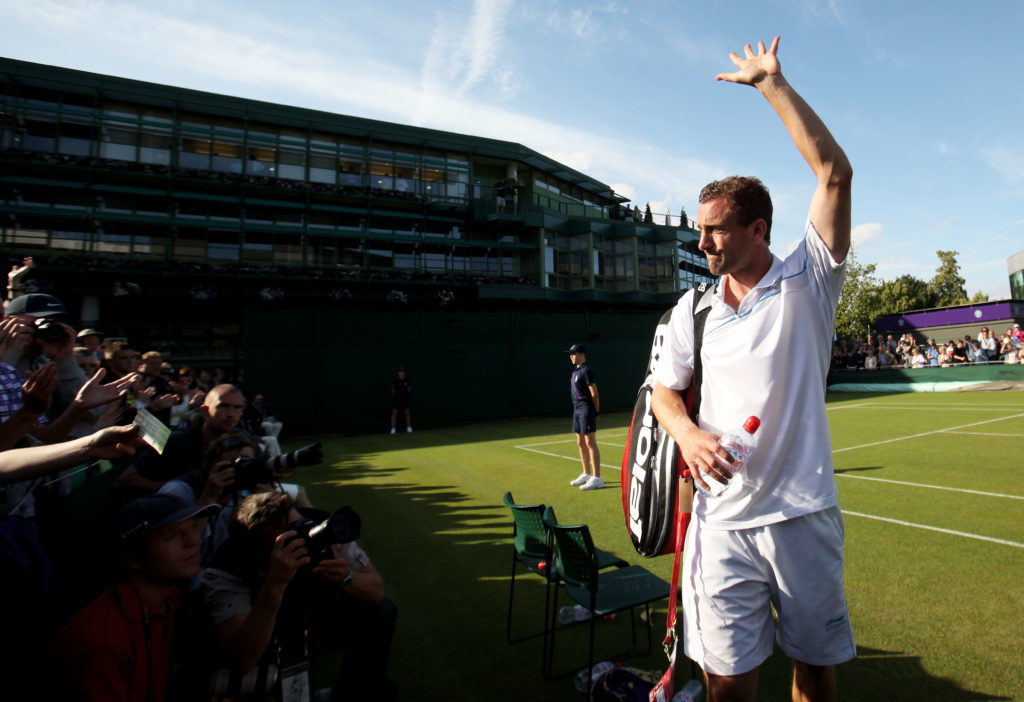 Conor Niland of Ireland waves to the crowd as he walks off court after losing his first round match against Adrian Mannarino of France on Day Two of the Wimbledon Lawn Tennis Championships at the All England Lawn Tennis and Croquet Club on June 21, 2011 in London, England. (Photo by Oli Scarff/Getty Images) 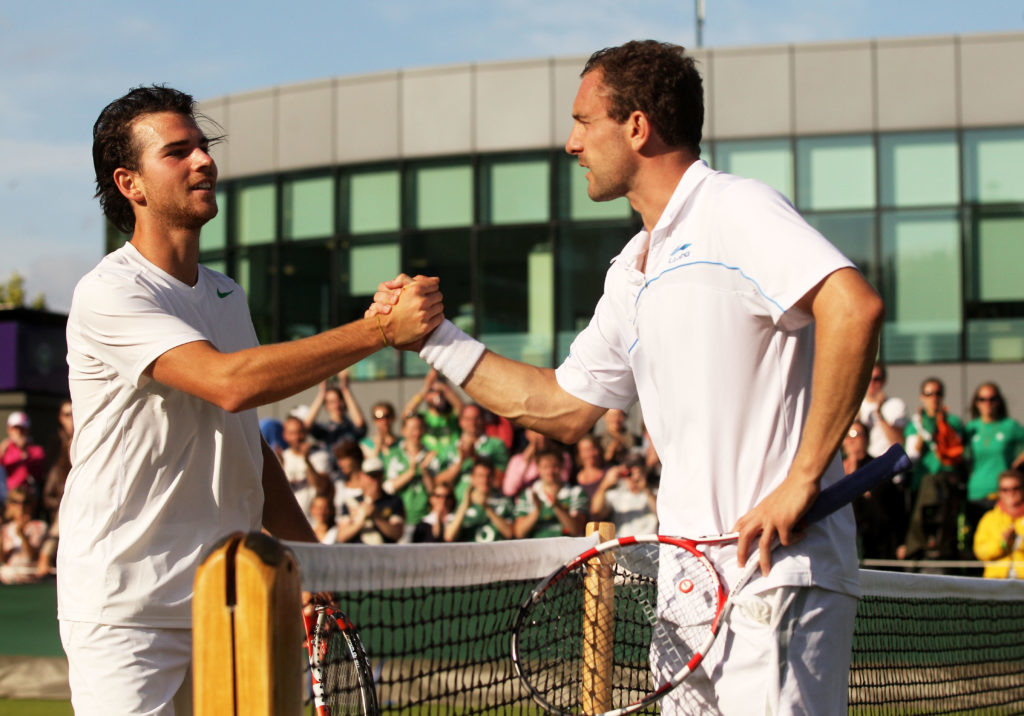 Adrian Mannarino of France (L) shakes hands with Conor Niland of Ireland after winning his first round match on Day Two of the Wimbledon Lawn Tennis Championships in 2011. (Photo by Oli Scarff/Getty Images)

“We have a poor tournament structure domestically, seniors and juniors,” he said.

“There’s only about four months of the year from May to August when there is a good run of events. But the rest of the time there’s very little match play. So, effectively, young players are just training from September to April.

“Our climate is different to the US, Argentina, Italy and Spain. There, they play in the sun all year around, which we can’t do in Ireland. Playing indoors is not the same to playing on clay. You won’t develop as well.

“We don’t have any international events in Ireland, either. If you look at Belgium and Holland, they will have seven or eight junior events and an ATP or WTA main tour event. We just don’t have enough tournaments or clay courts.”

If you want to travel to play in or qualify for events, you need money. And to get money you need sponsorship or be lucky enough to get funding from your national authority. However, with Tennis Ireland receiving low backing from the government this is often difficult.

But, then again, Britain and the Lawn Tennis Association (LTA) – the UK’s tennis governors - has struggled to produce great tennis players for decades, even with the advantage of having huge revenues from Wimbledon and having the ability to give wildcards to British players, which guarantees £45,000.

“Look, everybody wants more money, right?” said Niland. “But I don’t think more tournaments is going to cost a lot or laying clay courts instead of artificial grass ones. We just need a bit more ambition and be more linked into international tennis. There’s been too much focus on creating an academy structure in Ireland instead of having a better tournament structure. 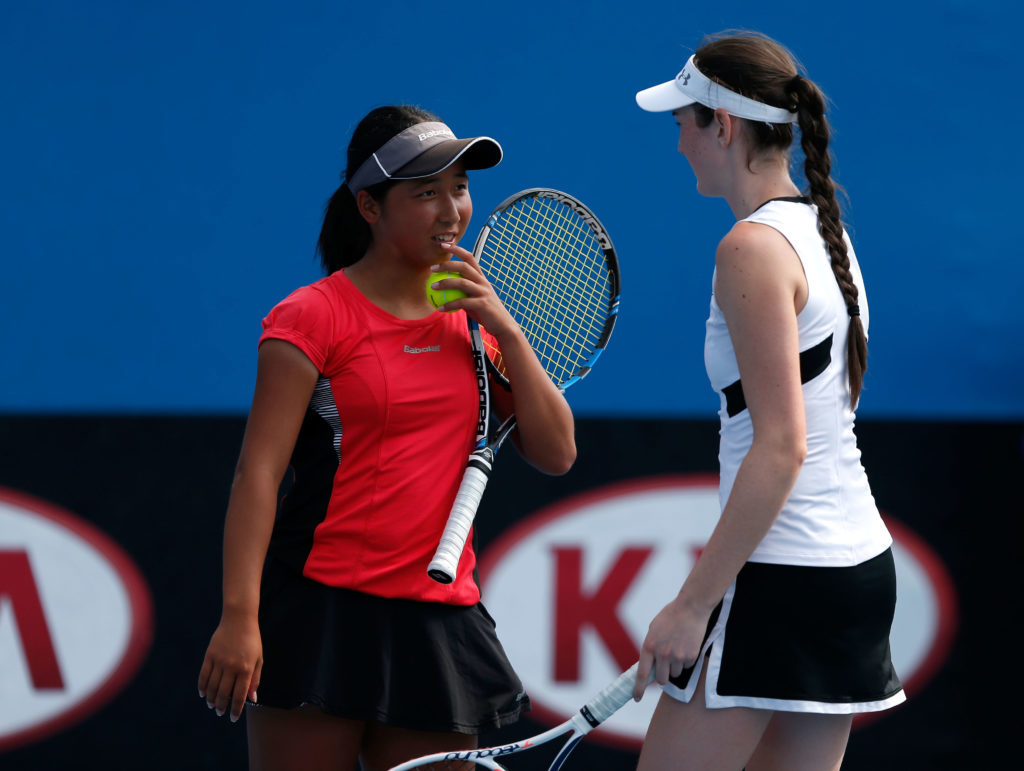 Georgia Drummy of Ireland and Ayano Shimizu of Japan compete in their first round match against Destanee Aiava of Australia and Lucie Kankova of Czech Republic during the Australian Open 2016 Junior Championships  in Melbourne, Australia. (Photo by Zak Kaczmarek/Getty Images)

“I would love to see an ATP 250 – a lower level tour tournament - in Ireland. For the exposure it would give to our players and to offer our tennis an anchor. It would encourage kids to play it in Ireland. I can’t see why so many countries around the world have a 250 event and we can’t. We had the Irish Open back in the 50s and 60s which attracted the best players in the world.”

The demise of the Irish Open is a sad story. For instance, early in the 20th century, it was viewed as one of the four most prestigious tennis tournaments in the world, along with Wimbledon, the US Open and the Manchester Open. As Niland points out, in the 50s and 60s, the tournament was won by legendary players like the Australian, Rod Laver. How the Irish Open has since been allowed to completely disintegrate into obscurity is difficult to accept.

However, at least in recent times there have been some encouraging signs for Irish tennis. Firstly, with Irishman, David Miley, running for the presidency of the International Tennis Federation (ITF), and, perhaps more significantly, the recent success of Georgia Drummy, the 19-year-old Dubliner who won a junior tournament in Portugal back in May.

“Georgia is doing very well,” says Niland. “She won a Futures event recently. She spent three years at Chris Evert’s academy in Florida. I look at her as the blueprint at what we should do in Ireland. When they’re 16 and finished their Junior Cert, they should go to academies in Spain and the US. Take that plunge and learn from the best. It’s too difficult to stay in Ireland and make it in tennis.”