The Gaels were a point down at the break but, considering the sheer strength of the wind they faced throughout the first-half, they always looked well-placed to take control of the match in the second period.

And they duly obliged, racking up 1-3 in four devastating minutes of football mid-way through the second-half, effectively knocking the wind out of the Kiernans’ sails.

But before that, St Kiernan’s – playing in their first senior final – had held their own and led for much of the match, with Kenneth Sweeney opening their account from a free after over-carrying from TCG’s Eamon McConville, the game’s first score after four minutes.

Adrian Hanlon, a late change to the starting line-up for Tir Chonaill Gaels, then missed a golden opportunity to even up the score, screwing an effort well wide to the left.

TCG didn’t have long to wait for their first score though, as Mark Gottsche arrowed a ’45 over with an almighty effort against the gale on eight minutes.

After Patrick Begley fouled Brian Duddy, Hanlon made amends for his earlier miss by pointing the resultant free to put the defending champions, who have now won seven of the last 11 London SFC titles, into the lead for the first time.

Moments later, Tir Chonaill opened up their goal account as a grounded Niall Boyle found the onrushing Hanlon, who buried a powerful effort into the top corner, leaving Brian O’Leary no chance in the St Kiernans goal.

St Kiernan’s produced an immediate response though, as Greg Lyons floated the ball into the danger area, with Cathal Og Greene reacting quickest to punch brilliantly into the net.

Amid a whirlwind few minutes, Hanlon was then black carded for a cynical foul on the flank, with John McGrath coming on to replace him, before Seamus Friel finished for TCG’s second goal after a charging run and lay-off from the impressive Cathal Magee.

The game continued at a frantic pace, with the prolific Adrian Moyles responding for St Kiernan’s with a score from distance, using the wind beautifully to bend over his first score of the game.

That point signified a strong spell for St Kiernans, who saw Sweeney cut further into TCG’s lead as the underdogs began to make the most of the wind behind them with half-time approaching.

With the scores at 2-02 to 1-03 in Tir Chonaill’s favour, St Kiernan’s half-back Danny Ryan went on a weaving solo run, cutting in from the left flank and rolling a placed effort agonisingly against the post.

Referee Beano Collins then produced another black card, this time for Kiernan’s midfielder Tom Waters in what was a huge blow for Chris Byrne’s side. Michael Callery came on to replace him.

Throughout the first-half, St Kiernan’s pushed forward in order to counter the short kick-outs from TCG goalkeeper Declan Traynor, but the tactic left acres of space for the Gaels to exploit in their attacks.

That pattern was evident again as Ronan Breen carried the ball unchallenged for 40 yards before teeing up Friel, who was closed down excellently by O’Leary in the St Kiernan’s goal.

However, it was clear TCG had their tactics spot on against the wind, carving out five goalscoring opportunities from well-worked hand-passing moves, and taking two before the break.

That said, they still went in a point down, as Michael O’Donoughue floated a score over for St Kiernan’s, who then had Sweeney add a free from a tight angle, bringing the half-time score up to 1-6 to 2-2.

St Kiernan’s came out of the traps well at the beginning of the re-start, and their cause received a boost as a lapse in concentration saw midfielder Liam Gavigan – a key player for Tir Conaill Gaels and a solid first-half performer – black carded for hauling down Greg Lyons.

Anthony McDermott replaced the London-born midfielder, who was one of five home-grown players on show of the two starting line-ups.

The instrumental Friel then took his match tally for TCG to 1-2 with a point from a tight angle, while the referee was forced to brandish a black card for a fourth time, this time St Kiernan’s goalscorer Greene the offender.

The black card came after Tir Chonaill captain Marty McCoy was flattened with a late challenge, but although the game was not being played with any real menace, Collins was consistent with his punishment.

Lyons almost scored a belter of a goal for St Kiernan’s, but had to settle for a point as his well-struck effort clipped the crossbar on its way over the black spot.

A couple of frees for either side saw Sweeney and McGrath increase their respective sides’ tallies, but Tir Chonaill really started to show their superiority at this point, ten minutes into the second-half.

Armagh man Niall Boyle made full use of the wind behind him as he sailed over a delightful point, before his team-mate Magee won possession from a poor St Kiernan’s kick-out, and punished them with a close-range effort over the bar.

That edged TCG into the lead at 2-06 to 1-08, only for St Kiernan’s to tie things up once again as substitute Peter Finn – the club captain – fisted over following a well-worked move.

Then came Tir Chonaill Gaels’ controversial third goal. Boyle appeared to pick the ball off the ground in the build-up, but Brian Duddy was allowed to bundle the ball home after it came back off the post.

At 3-06 to 1-09, St Kiernan’s were still only three points down, but collectively they were struggling with the wind against them, although Moyles defied the breeze with a close-range free soon after.

The two sides continued to trade scores – courtesy of McCoy (TCG), O’Donoughue (St Kiernan’s) a free from Friel (TCG) and a beauty from Ryan (St Kiernan’s) – but although St Kiernan’s were staying within touching distance of their opponents, they never really looked like reclaiming the lead.

Magee, who earned the Irish TV Man of the Match award, was particularly inspiring in the second-half, and he capped his performance with a brilliant point from distance after collecting a lay-off from McCoy.

It would prove to be the last score too, but the drama wasn’t over just yet as St Kiernan’s forward O’Donoughue, who had been so impressive throughout with two fine scores, lost his discipline and kicked out at Tir Chonaill’s full-back Philip Butler.

After consulting his official, the referee handed the Londoner a straight red card. A wide apiece saw out the final moments of the game, which was played at a commendable level considering the ferocious conditions.

Tir Chonaill now advance to an All-Ireland quarter-final date with Munster champions Clonmel Commericals, which will be played in Ruislip on the weekend of December 12/13.

Cathal Magee (Tir Chonaill Gaels): The Mayobridge forward was the orchestrator of many TCG moves, and chipped in with two scores from play himself. Particularly impressive in the second-half.

We thoroughly enjoyed it. St Kiernan's put up a serious show, considering everything that's happened in the build-up to the final and the time of year we're playing it. The conditions were poor. I mean, the pitch was in great shape, but the weather was far from it. All things considered, it was a great game to be involved in and we're delighted with the result. We knew it would be a tough one, and at half-time we were one point down. We noted at half-time that wind would never win a game for you, we'd learned that before, so credit to the lads for digging deep and coming back out to put up a good show.

TEAM OF THE TOURNAMENT 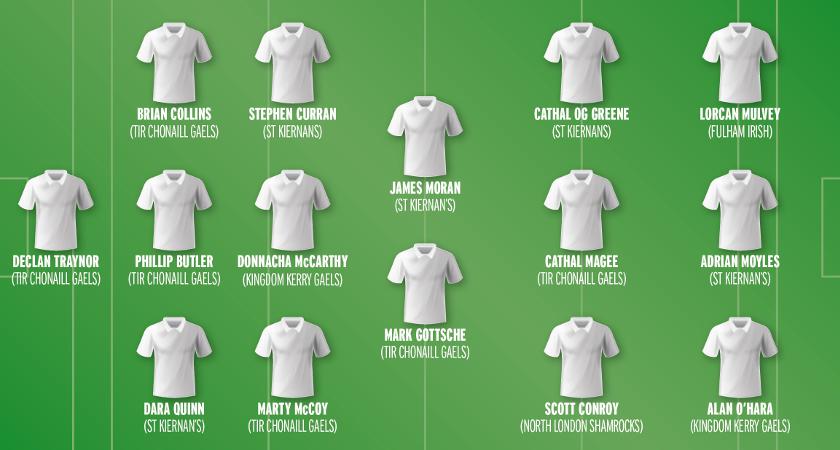