Keith Gillespie on how not to be a football millionaire

WHEN the man entered the bar and made his way through the well-heeled businessmen who’d stopped for a drink before heading home, heads turned.

He still held that distinguished look, that piercing glare which softened into something gentler when someone said his name.

Tall and unshaven, dressed in denim, he moved with big steps down the bar, hearing the office workers voice the answer to the puzzle in their heads.

“Was that Keith Gillespie?”

“Wasn’t this the bar where he had the row with Alan Shearer?”

And it was a long time ago, 16 years to be precise, when Gillespie hit the beer and then the headlines, a practice he learnt to perfect.

Now, at 38, he has seen a career of triumph end in regret. Had fate treated him differently, he could have been one of the most decorated players of his generation. Instead, he is known as the man who blew £7million.

He’s written about it candidly, refusing to censor his life story and falsely represent himself as something he’s not.

All his demons are presented to his audience who are left to make their own minds up. He talks about addiction, about the laddish culture of his profession and then the darker days of his depression.

Tales are told out of school, like the one when Gerry Taggart, a team-mate with Northern Ireland, travelled home on an airplane from an international and decided it would be a funny prank if he partially undressed to perform a gag for the amusement of his peers and the embarrassment of a stewardess.

“Gerry might not have liked me writing that but it happened,” says Gillespie. “You can’t please everybody at the end of the day. That’s not the purpose of the book. You have just got to go down the line and go with it all.”

Mercifully, he doesn’t pull punches. Managers — particularly Kevin Blackwell — aren’t spared the poison of his pen. Yet nor is Gillespie as he revisits ‘Black Friday’ — the day he blew a year’s wages on slow horses.

“It wasn’t anyone else’s fault,” he says. “I had a problem and I didn’t deal with it. It took ages before I copped on.”

He learnt the hard way. These days, he lives in Bangor, his home town on the north Down coast. His last playing gig — with the League of Ireland’s Longford Town — has just ended and the rest of his life is about to begin.

“What happens now?” he asks in his book.

And there are no answers. He isn’t blind to life’s struggles yet having emerged from the darkness of a past he is well rehearsed in coping with the issues which may arise down the line. 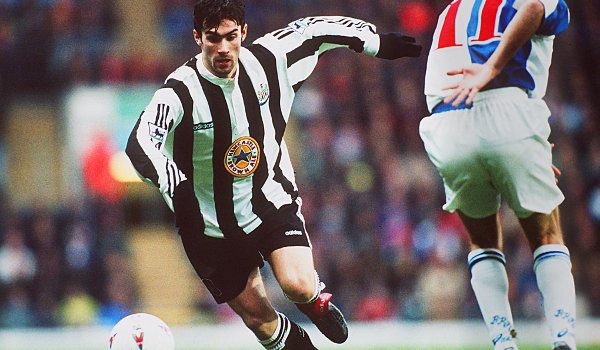 “I am always asked if I have regrets. Obviously I lost an awful lot of money gambling and in investments but I am the sort of person who is easy come, easy go. For me, what can you gain from looking back?

“What’s gone is gone. I have three great kids, I want to look forward now and that’s the way I feel with everything.”

Yet when we do look back, at a career which saw him emerge from the same class as David Beckham, Gary Neville, Paul Scholes, Ryan Giggs, Nicky Butt and Phil Neville, some things are quickly forgotten: that he broke into the United team before Beckham — even though they shared the same position — that he was a key figure in Newcastle United’s rise into one of England’s most entertaining sides and that he once destroyed Barcelona in a Champions League Group match.

“Playing under Kevin Keegan made me,” he says. “Some managers just have that natural ability to make players perform and Kevin was the best man-manager I ever worked under.

“People will say that tactically he was naive but he would make you feel like the best player in the world.

His team talks were three minutes long but he would go around to everyone, every single player, and speak to them. And after he did, you went out on the pitch feeling on top of the world. That’s an amazing trait to have.”

Did Alex Ferguson have that?

“No. Not in the same sense as Keegan. His work was done more on the training pitch. He’s still a great man, though. My respect for him is enormous.”

That it remains so, nearly two decades after United sold him, is a reflection of the way Ferguson cut that deal, lying to Newcastle about the wages Gillespie was on at Old Trafford to ensure he received favourable terms at St James’ Park.

And while others are shown up for their flaws — Bryan Hamilton, Blackwell and his school headmaster — Gillespie speaks kindly about a supposed terror in the dressing room: Roy Keane.

“I can only talk about people as I found them and Roy was a gentleman. Yeah, he was lot younger when I knew him and with people like Bryan Robson at Old Trafford when he first arrived there, he kept his nose clean and was nowhere near the outspoken person he became.

“He was such a competitor, though, that he could inspire men all around him and I think he and Martin O’Neill are a great appointment for Ireland. I get the feeling that he will be the man to take over from O’Neill. That’s my personal belief.

"He’s obviously had his problems with the FAI going back to Saipan but that’s a long time ago, a lot of water has passed under the bridge and he’s done a little bit of an apprenticeship at Sunderland and Ipswich.

"With Martin to mentor him, he can become a better man-manager because I feel as if his problems were his man-management style, that he was a bit too outspoken to the players. For me the future looks bright.”

His own future, though, is unclear. For ex-players, the road from your 30s to old age is rarely smooth. And yet, he’s calm. “I’ve come through a lot,” he tells you. “And I’ve lost a lot. But I have three children. That’s the most important thing in life.”

How Not to be a Football Millionaire by Keith Gillespie is available now.

See More: Book, How Not To Be A Football Millionaire, Keith Gillespie, Manchester United