It’s fair to say 2014 has been a memorable year for Kelly Gallagher. In March, the Kilburn-born Paralympic skier shot into public consciousness after she, alongside her guide Charlotte Evans, won Gold at the visually impaired Super-G in the Winter Games at Sochi.

The 29-year-old became the first athlete on snow from Ireland or Britain to achieve the feat. The result was the culmination of a long journey since her parents, who hail from Donegal, moved to Bangor in Co. Down when Gallagher was three. Her achievements saw her shortlisted for the BBC Sports Personality of the Year 2014. Ahead of Sunday evening’s awards show, Gallagher speaks exclusively to The Irish Post.

Did you expect to make the shortlist for BBC Sports Personality?

It was a massive surprise. We’re the only Paralympians on the list and it’s an amazing thing for skiing. I’m not sure there’s ever been a skier on the list, so it’s really cool.

How do you think you’ll fare?

It’s going to be tough. I can’t imagine being as popular as Rory Mcllroy or Lewis Hamilton. My mum was like, ‘you’ve got multiple personalities, of course you’ll win (laughs)’. But it’s lovely for our sport. This time last year, not many people knew much about Paralympic alpine skiing.

Is there anyone you’re looking forward to seeing?

I’m just excited for the nomination and to be there. We’re used to being in tracksuit bottoms and training hard in our own little bubble. It’ll be nice to see what other nominees have achieved in their sports too. It’d be nice if folk could get behind us and vote and [I hope to] have a bit of fun.

You grew up a few miles from Rory Mcllroy (Holywood). Have your paths crossed?

No, never. It’s cool for two people [from the North] to be in the same list. Previously Barry McGuigan won it, Mary Peters won. Ireland isn’t unused to having athletes being world renowned.

You didn’t even take up skiing until 17. How did that come about?

Me and my mum and dad took a trip to Lourdes. We had a car and drove down to Andorra and took a ski trip. I said ‘we can get skis and have a go’. And I just thought it was incredible, the sense of freedom.

How soon afterward was your talent identified?

I’m not entirely sure. I didn’t get on to the ski team until 2009 when I was 23. Once I figured out there was a possibility I could go to Vancouver (in 2010), I threw all my energy at that. That’s when I decided, ‘right, I’m going to train so hard, regret nothing and just go nuts for it’.

People might wonder how you managed to develop as a ski athlete growing up in Bangor.

My father became a pilot and I was always encouraged to do [anything]. I worked really hard, did the best I could with the quality training here. It wasn’t like I was ever told ‘you’re from Northern Ireland, you can’t be getting involved in that’.

How important has your funding support been?

Yeah there have been key people, including my family, who’ve helped me along the way. At the start, I was working full-time as a statistician, so that was hard. Now I’m a full-time athlete, it’s just a real joy to do it. I’m based in the Sports Institute Northern Ireland. I use the facilities here and eight months of the year we’re away living out of a suitcase. It’s really good fun [going] all over the world.

It must have felt special being the first athlete from the North to complete at the Paralympic Winter Games.

It was really cool. It’s strange as well because I’m at a time in my life when my friends are turning 30 and in the married-and-having-children phase. I’m still living a fun little dream. 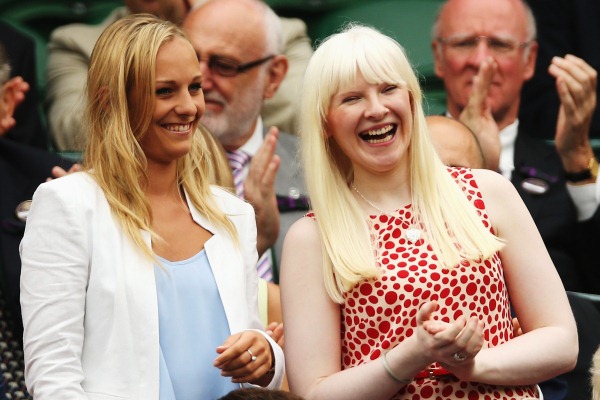 What was it like when you returned from Sochi with Gold?

Was it hard to keep focused given the off-track distractions in Russia, which included terrorist threats and issues around gay rights?

It’s part of being an athlete. There are so many distractions: ones the media cooks up, ones that are actually there. Some things you rationalise, like the terror threat. As an athlete sometimes there are things you’d like to talk about, but you know it’s not going to benefit anybody. It’s not a part of my personality in real life. I would tell anyone what I think about things. But as an athlete you have to keep your opinions to yourself sometimes. It’s not like I don’t think of those things.

You also had to deal with the huge expectation that you would win.

There was a lot of pressure. The media kept saying, ‘you know, you’re pretty likely to win’. It would be in the question. You’re confident, but you’re never sure in ski racing. Anything could happen.

What did it mean to be the first person from either Ireland or Britain to win Gold on the slopes?

It’s great. You talk about identity, it’s the first time anybody won Gold on snow in able-bodied or disabled sports. Part of us thought maybe there’s an impression it’s easier, or not as professional, as able-bodied sport, but it really is. I’m pumped that we got to be the first and put it on the map. It’ll mean it’s easier for younger athletes to come through.

How significant was it for disability sports?

When a family has a child who’s been diagnosed with a disability, they never expect it. They’ve been able to see us on television doing things and I saw that in action when I got home. You see parents telling their children that they can go on a bike or can do things.

You went through a difficult time in 2012 with a series of injuries. The same year you lost your father to cancer. Prior to his passing, did he encourage you to keep going?

Not particularly. I think journalists picked up on that as if I was doing it for my dad. I was like, ‘no, that’s not really how it is’. My daddy gave me loads of advice and was always really wise, [he’d say] ‘do things to make you happy and do them well’. He was so proud, like my mum who’s our biggest fan. I was encouraged by dad and I guess I thought he was an inspiration. To me that was normal. I was never told ‘with your eyesight, you can never do that’. He taught me how to drive a car in a country road in Donegal (laughs). It was really hard in 2012, but coming back from the [Sochi] Games has been more difficult because I have to reassess. It’s now that I’ve started to look at my life and go ‘wow, my dad isn’t here anymore’. Nothing’s as much fun without somebody you liked so much.

How does your visual impairment — oculocutaneous albinism — affect you while racing?

If you imagine with the snow and sun, everything’s a sea of white. All I can try to find is this little orange dot (Charlotte skis in front in a fluorescent orange bib). Then I have a microphone in my helmet. We’re talking to each other constantly. Kelly looks ahead and takes the best line in the way rally drivers do. She’s telling me what she’d be able to see and what I should be feeling. My eyesight’s been bad since I was a baby. It means I’m quite confident about things like that. I guess as I’ve never had perfect eyesight, I can’t say what I’ve lost and maybe that’s a blessing.

What speeds do you reach on the slopes?

When we won our Super-G we were clocked at 110km per hour, which is about what you’d drive on the motorway. All we have for protection is a mouth guard, a back protector and helmet, and you’re basically in a cat suit.

Don't you get nervous beforehand?

I might do, but it’s the same as anything. You learn to control it. If you get a knock-down or injury, when you come back you [also] recover mentally. It’s the same for every athlete, a gymnast or if you were riding a horse.

What are your plans for next year?

In March we have the world championships in Canada. I guess maybe the limelight will go away until South Korea (2018). But we’ll still compete against the other top girls in the world. Hopefully we can improve, keep doing well and still have a love for the sport. We’ve got a full calendar of stuff coming up. And snow training. Instead of prancing around in dresses we should be in the snow.

BBC Sport Personality of the Year is one BBC One at 8pm on Sunday. To register to vote, click here.

WATCH: Tyson Fury apologises for any offence caused in light of recent comments