'Now that George Best fella is a great fella': A poem for Pat O’Connor

THEY say if you love what you do then you’ll never have to work a day in your life.

Well in that case, Pat O’Connor never worked a day in his life, because as soon as he lifted up a trowel he fell in love with the building trade.

Pat was born in 1932 on a small farm in Ticknock, Co. Carlow, right on the border with Wicklow. He was the oldest of eight children and at the age of 17 – like thousands of his fellow countrymen – he headed for England, where he became part of that great generation of Irishmen who helped to re-build Britain.

Finding digs in Elephant and Castle in South London, he got work in the construction industry and soon started to train as a bricklayer.

And it was in the Shamrock Club at the Elephant – which was owned by well-known Irish wrestlers the Casey brothers – that Pat met Rosaleen (Rosie) McCready from Donegal.

Two years later in 1954, they were married in the ‘My Precious Blood’ church in The Borough, South London. They set up home in St George’s Buildings on Red Cross Way, Borough, which was in those days a rough and tumble, tight-knit community of cockney dockers, markets workers plus Irish and Maltese immigrants.

The family moved to the South London suburb of Thornton Heath in 1962, where they became members of the St Andrews Parish. Pat, along with other volunteers, helped build the St Andrews Church Hall, which for many years became the focal point of the Irish social scene in the area.

In May of 2004, Pat and Rosie returned to the ‘My Precious Blood’ church to renew the wedding vows that they made 50 years previously. Upon retirement, Pat – along with Rosie and other family members – spent the summer months in Co. Donegal, where he was a well-known figure around the Lettermacaward area.

Sadly, for all those who knew him, Pat passed away in September of last year. He will be sorely missed by all who had the pleasure of his presence. He is survived by wife Rosie (London), his sons: John (New York), Vincent (London), daughters: Angela (London), Bernadette (New York), brothers: Mick (Rugby), Johnny (Sydney), Jim (Carlow), Christy (Galway), and Joe (Canvey Island), sisters: Josie (New York) Chrissy (London) and grandchildren: Grace, Caitriona, Kelly and Keira.

In the middle of heated football conversations dad would butt in.
“Now that fella Best is a great fella,” he’d say with authority.
Knew nowt ‘bout football did dad.

Where he was from football was frowned upon.
The foreign sport, the garrison game
Which if you played, you’d be banished
Either to the fires of hell
The pubs of Camden Town,
Or to the Connaught Rangers.

Knew nowt ‘bout football did dad.
The muddy building sites of a London town
Ravished by war, became his playing field.
Building became his game.
He took to the trowel like Finney took to the ball.
He was passed bricks by hods more than Hodd passed to Crookes
Over doorways he built headers
Of which Astle would have been proud
He knew more different brick bonds
Than Billy or James
And he built many brick arches
Alongside the Thames.
But he knew nowt ‘bout football did dad.

When his sons started to play
He tried to learn the game
He never did.
But he did learn the name George Best.
“Now that George Best fella is a great fella,” he’d say
Interrupting the football intellectuals
As they discussed the intricacies of the offside trap
And the merits of a Terry Cooper over lap

Not long ago Dad had his moment of glory.
Some young Sky telly products were arguing in pub
Was the greatest Ronaldo, Messi, Zidane
And they all then agreed Roy Keane was the man.
“Now hold on one minute,” said Dad in dismay
And all there who knew him, just knew what he’d say
“That George Best fella, now he was some fella.
The greatest there was that I can tell ya.”
A couple of old timers looked up from their pints.
“Now there’s a bloke who knows what he’s talking about,” said one.
Dad grew in statue and rested his case.
A chuffed look of pride all over his face.
He knew his football did Dad.

Now Dad’s gone to heaven
In peace he will rest
And I’m sure he is mentioning the fella called Best.
Now I don’t know if George Best was a great fella or not
But when in his prime was the best of the lot.
But the one thing I do know,
I’ll tell you now Dad,
You might have known nowt about football,
But who gives two hoots
‘Cos that fella Best as great as he was,
Wouldn’t have been able to lace up your boots. 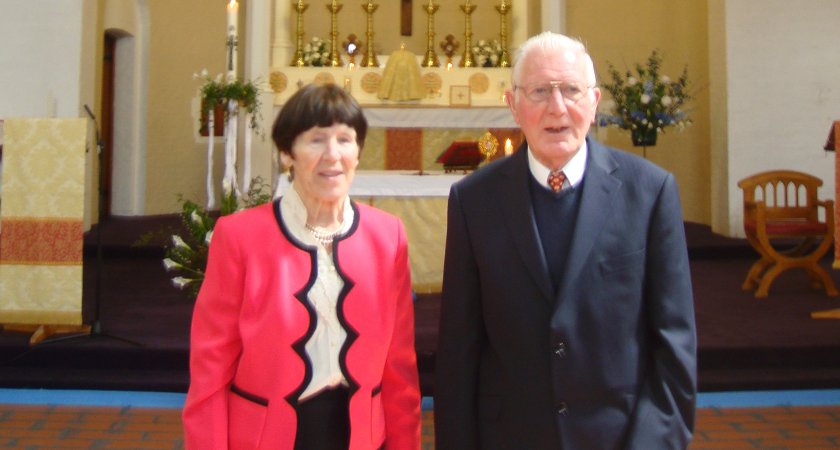 Pat and Rosie O'Connor on their 60th wedding anniversary in 2014