Ryan Cullen on his Formula One dream, racing idols and driving under the Irish flag

Sitting in a Singapore hotel room several years ago, Ryan Cullen was at a turning point in his life. Despite being an avid sports fan he came close to accepting that the forthcoming years would be spent in education.

But, finding himself in close proximity to one of Formula One’s most famous Grand Prix circuits, it was here that he decided his future belonged in motor sport. “I kind of didn’t really know what I was doing with my life, and I was at an age where either I was going to university or I was going to get a job,” Cullen says.

“My dad just said, ‘what do you want to do with your life?’ I’ve always thought motor sport was cool, so I thought why don’t we go and speak to a few teams to see what I could do. There’s nothing you can’t do, as long as you go out to try to find it.”

Find it he did. Walking along the pit lane at the renowned Brands Hatch racetrack on a crisp February afternoon, the 23-year-old treads the tarmac that’s etched in the history of his racing idols Michael Schumacher, Ayrton Senna  and Nigel Mansell.

Currently one of Ireland’s brightest prospects to chase the Formula One dream, having spent a couple of seasons two tiers below in the GP3 Series, Cullen rests on a GT3 that he’ll be driving in the Porsche Carrera Cup on Easter weekend.

It’s one of the winter testing days at the Kent-based track, which hosted the British Grand Prix on 12 occasions between the 1960s and ’80s.

Standing in the number 13 garage and sheltered from the rain, Cullen’s come a long way from that poignant day in Singapore. He’s making a name for himself in the racing world as one of the biggest Irish prospects that the sport’s been missing in recent years. 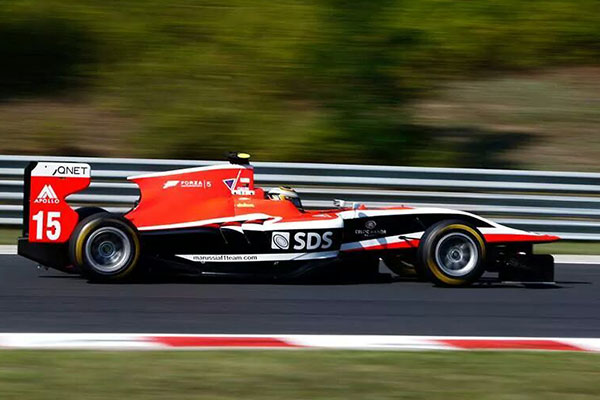 A late-starter, bypassing the go-karting route that most young hopefuls undertake, the Somerset driver admits he kickstarted his career in an unconventional manner. “I did my first race and got a podium,” he says, smile beaming. “I shouldn’t have really been able to do that. So, I did the British Championship in 2012 and finished sixth in my first season. Quite a few people were impressed that I’d literally just come off the street.

“I mean I wouldn’t say I know totally nothing about motor sport, but I had no karting or racing experience. To compete with people who have been racing for years is pretty good.”

One of three children to a father from Co. Leitrim and a Cypriot mother, Cullen is aiming to pave the way for Irish drivers like himself. “The last Irish driver was Ralph Firman, that was some years ago. He didn’t have an Irish accent or anything like me, and Eddie Irvine was from Northern Ireland,” he says.

“There’s a lot of Irish people in motor sport, but not many drivers which is interesting. That works for me, as there isn’t an Irish driver in single-seater (racing) who’s racing much higher than me at the moment.”

Born and raised in England, except for the year-and-a-half the family spent in Düsseldorf, Germany, as a result of his father Patrick’s job as a civil engineer on a nuclear plant, you would think that Cullen would naturally consider himself a British driver.

Replicating the paths of previous Formula One World Champions Lewis Hamilton and Jenson Button isn’t an option for him, however, as he has his sights set on flying the Irish Tricolour.

“I see myself as an Irish driver because I’ve always had the flag on my car and suit. Regardless of motor sport I’ve supported Ireland in rugby, football, everything. I even have the Irish anthem when I race.

“I get a lot of support from Irish people, even at Monza someone had the Irish flag out during the race, and came over to us after.”

Considering that racing isn’t as accessible a sport as the GAA or rugby, for example, it’s intriguing how he developed such a passion for it. He may be under the guidance of 2009 A1GP World Cup winner for Team Ireland, Adam Carroll, but it’s his father that he cites as the driving force behind his career.

“He found me the right sponsors, I’m grateful for that, but he’s always enjoyed motor sport,” Cullen says. “He watched Formula One with me when I was younger, and we used to play PlayStation and mess around, that’s pretty much how it started. Apparently I used to jump in the karts where my dad worked and race all the workers. 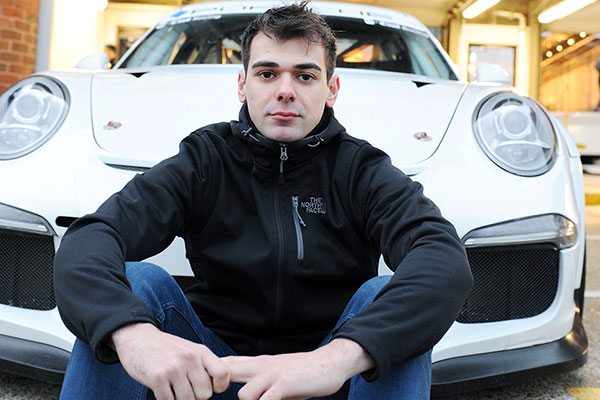 Ryan pictured in front of a GT3 Porsche Carrera, a similar model of which he'll be driving over Easter weekend

“We’ve been to Grands Prix, I’ve pretty much been to all of them. Apart from being a GP3 driver (with Marussia Manor), we race on the support weekends of Formula One. I’ve been to watch as a fan. It’s quite cool to finally be racing on the same track as some of them.”

“Me and him [Daniil] had a coming together in Barcelona I remember. He didn’t exactly approve of my driving,” Cullen jokes. “He went on to win the Championship that year for Red Bull. He was on their programme and they pretty much put him straight from GP3 to Formula One.”

Is it frustrating to watch a former competitor edge closer to his dream and not be afforded the same opportunities? “You just accept it really and hope for the best. You have to be very dedicated and determined to do it, that’s why turning up to test days in the winter when it’s zero degrees outside, you wouldn’t see many drivers walking around then, they’re not even driving,” he adds.

This is why Cullen is giving himself two more years to try to follow suit, but why he’s also keeping his options open. “Formula One is the ultimate goal, but if you’re talented enough you don’t always make it, which is why going down sports car, GT routes is a very good option for some drivers. You can showcase your talent and get a decent living out of it and become a factory or manufacturer driver for a different series.

“By the age of 25 if you haven’t got into Formula One then you need to look elsewhere. So, that’s why the other option of GTs and LMP2 cars (used for Endurance racing) is a good way to go because there is a career out of it.”

Cullen was unlucky last year, when his stint on the young driver programme at Marussia came to a premature end as the team entered administration. Testament to his ambitious career goals, and his Vice Champion finish at the recent MRF Championship, he’s optimistic about the season ahead.

He’s no longer standing at the crossroads wondering in which direction his life is headed. With plentiful raw-talent behind him, Cullen is on the up, and he’s certainly one to watch.

Crash and Burn: Documentary on Tommy Byrne to premiere at Sheffield Doc/Fest