Sacrifices, honesty and hard graft: Why there's much to respect about Canada's World Cup squad

THESE are the days Kieran Crowley lives for, the chance to prove something not just to the world but also himself.

Seven years in charge of Canada has bruised his pride. Criticised for overseeing a slide to their lowest ever position in the world rankings – and more recently for the addition of his brother to the coaching ticket – Crowley comes into this World Cup needing to hang onto his reputation as much as his job.

Six defeats in seven games last year cost him much of the goodwill he had built up in the first six seasons of his reign and while a reshuffle of his backroom team seemed necessary, by placing relatives and friends into those positions, Crowley’s judgement was called into question.

And not for the first time. After leading his native New Zealand Under 19 team to World Cup success in 2007, the decision to uproot his family and shift them half way around the world to work in a rugby backwater appeared to lack logic.

“Why Canada?” he was asked.  “Why not stay with the Under-19s and live in the North Island where you were brought up? Why not wait and see if a vacancy comes up with a Super 14 side? Why not try the pro game in Europe?”

The answer was complex. Having worked his way up the coaching ladder, to the point where he had the ear of the then All-Black coach John Mitchell from 2001 to 2003, Crowley didn’t just see an opportunity when the Canadian position arose in 2008 but also something of himself in the amateur players who juggled their working lives with a sporting passion.

Once he had been that player, a prodigy who played representative rugby with Taranaki as a teenager, who was just 22 when he first played for New Zealand, who combined work on the family farm with a rugby career that brought him 19 test appearances with the All Blacks and trips to two World Cups. “My upbringing established the values and characteristics I think I now bring to coaching. It taught me the value of honesty, hard work and flexibility.”

It is just as well. Managing Canada is all about managing expectations. Quite apart from the logical nightmare of co-ordinating players from across a huge country, Crowley also had to contend with the fact that just over a third of his World Cup squad are on the payrolls of professional clubs. The rest are amateurs, much like GAA players, but it’s that fact that commands Crowley’s respect.

“I know the sacrifices that these boys here have made to go to a World Cup,” he said in an interview with the Canadian Press.

“They're the best professionals I've ever been involved with but they don't get paid — the majority of them. Yet when you hear the national anthem of Canada going and you look down and see them singing their hearts out, you know what they've been through to get here.

“That's the emotional side of it. You just hope they can go out and put out a performance worthy of the sacrifices they've made.” 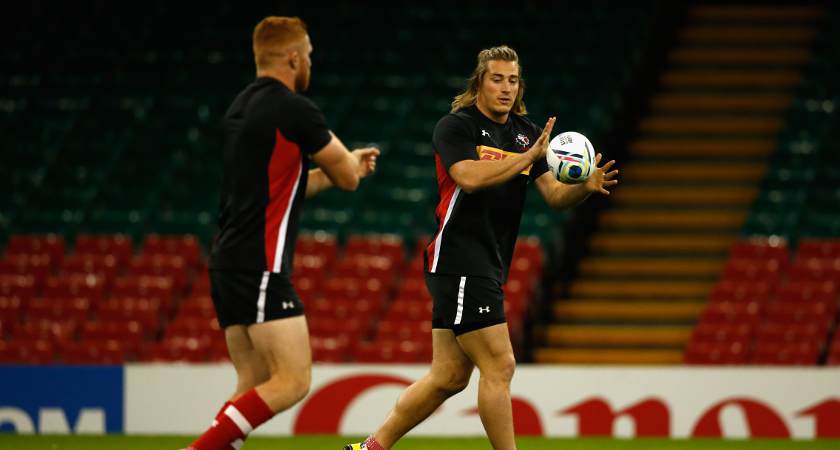 Canada's players in training after arriving in Britain [Picture: Getty]

Given how – for two-thirds of Crowley’s squad – the biggest sacrifices are financial, there is something perverse about how fleeting their exposure to fame is, because much as we like to pretend there is an interest in teams like Canada in between World Cups, the reality is we (and the vast majority of Canadians) turn our eyes away for the four years in between.

And yet against this backdrop of indifference, Crowley clearly has left a positive impression, adding depth to his squad by scouring the country for new talent, upgrading their defensive structures, adding flair to the one-dimensional attack that he inherited. However, in rugby old stereotypes die hard. Whenever Canada tour France, they are dubbed “les bûcherons” (the lumberjacks) even though they are now capable of playing with fluidity and style.

“When I first arrived here, I was guilty of the perception that the players were big,” said Crowley. “So it was a shock to me to discover they're not. But for years, before I came and during my time, there has been some really good work done in terms of strength and conditioning.

“The players now, I think, are in the best nick they've ever been in. That just doesn't happen by giving them a programme and telling them to follow it. It's day-to-day contact with those players. It had to happen because the rest of the world’s teams have got bigger, a hell of a lot bigger. Canadians didn't, because they simply were still (playing) amateur rugby.

“We went to Wales a good few years ago and our forward pack was 10 kilos a man lighter on average and when you put 80 kilos up over 80 minutes of rugby, it's massive, and our backs were the same. A good big man will always beat a good small man. Size is not everything but you certainly need it to compete in that set play.”

To compensate, Crowley has discounted a previous practice where players were selected on reputation. “He's a really fair coach and picks the man on form,” said flanker Chauncey O'Toole. “It's really who's playing best at the time.”

And no Canadians, over the course of the last two years, have been playing better than their Ospreys pair, Tyler Ardron and James Hassler, the former winning the Ospreys player’s player of the year award, the latter named in the 2013-14 Pro 12 team of the year. “Being an Osprey has opened my eyes to the high levels of professionalism that goes into everyday life when you are preparing to play 20 plus games a year,” said Ardron, “the commitment it takes and the work that needs to be done every day in order to perform week in and week out.”

While positive in a personal sense, Ardron’s progression cannot disguise the issues afflicting his Canadian colleagues who haven’t been snapped up, something Hassler wasn’t afraid to address either. “Having games week-in, week out is the main difference to what I was used to before I came here,” said the winger. “Back home I was doing the sevens stuff so I was training quite a bit but you wouldn’t have a tournament for four or five weeks at a time.

“Getting your body ready for games every single week and trying to stay mentally focused is the biggest difference I’ve found. It has certainly made me a better player and got me buzzing for this World Cup. We’re all hoping to make our mark.”

“We were unlucky against the Scots,” he contends and while he has a point – that 17-15 defeat in Toronto last year was unfortunate, the bottom line is it ended the same way 50 per cent of their tests under Crowley have done.