Why Ireland's iconic Telefon boxes can now be found in pubs, bars and restaurants across the globe

RECENT generations in Ireland have become accustomed to instant real-time information, although there was a time when communication was not so simple.

For many years the Irish public relied upon the local Telefon box as their only means of communication with the outside world.

The first such box was installed as far back as 1925 and to this day it can be found on Dawson Street, Dublin.

In 1932 the boxes were fitted throughout Dublin in response to the Catholic Eucharistic Congress, which helped celebrate the 1500th year of St. Patrick’s arrival to Ireland.

The increased popularity from this event led to their installation throughout the length and breadth of the island.

The boxes were modernised in later years, but it is the old iconic boxes, with the unmistakable Telefon branding, that has a place in the hearts and minds of generations of Irish people.

And it’s that sentiment that Dublin business Burke Joinery has capitalised on. 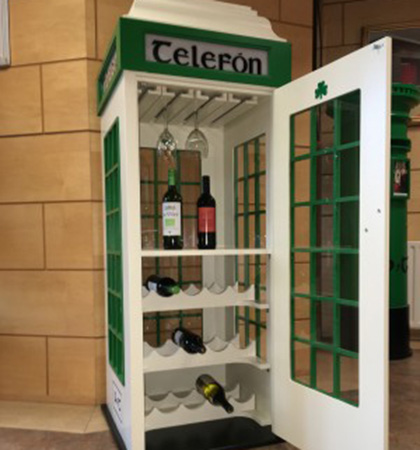 An Irish Telephone Box that doubles as a wine cabinet

The family-run business has found a way to cherish and protect the heritage of this piece of Irish history, while incorporating it with the present.

Their master joiners hand-make the old style Telefon box, in a range of sizes and styles, and sell them to Irish hotels, restaurants and bars across the world – each one acoustically tested with a noise reduction of up to 22dB.

“What the Irish Telephone Box represents is perhaps now more important than it has been for generations,” a spokesperson for the company explains.

“In a world where we are in constant contact with one another the Irish Telephone Box can serve as a reminder that communication wasn’t always quite so simple, and was therefore something to be cherished.”

The boxes serve as a nostalgic reminder for those frequenting these Irish establishments of the telephone box of their heritage, which not only had a practical purpose, but also came to have a major social significance with the Irish population.

Once as important a structure to many as the bank and even the church, each Telefon box had a story to tell.

Throughout the villages of Ireland they brought news of births and deaths and played a central role in the lives of those both lovesick and homesick.

In recent years, with deep modernisation taking place all over Ireland, it was decided that the old Telefon boxes would be removed from the landscape, and today only a handful of original boxes remain dotted throughout the countryside.

But thanks to the work of Burke Joinery, and the orders of the many who have purchased one of their Irish Telephone Box products, the symbol is being preserved both at home and on the wider worldwide stage.

To date, Irish Telephone Box clients include The Brazen Head, Foggy Dew and Salmon Leap pubs in Dublin, O’Connell’s in Galway, Durty Nellys in Clare, The Irish Pub in Germany, O’Connell’s in Italy and at GWR Distilling and the Blue Nova in the US.

Burke Joinery is a member of the Irish Pubs Global Federation. For further information click here