BEANS on toast is a staple Irish meal growing up — and now these two Irish women have managed to take the humble bean and create something different.

Sarah O’Connor and Isolde Johnson found that their busy lives as young professionals meant that they were back to their staple student diet of beans on toast.

But now, their bread and butter comes from selling potted beans in supermarkets.

They set up The Cool Bean Company in 2012 and last year launched onto the Irish market — and in November they branched out into Britain for the first time.

The savvy entrepreneurs were keen to maintain a balanced diet and a healthy lifestyle — but did not have the time to dedicate to these meals every day.

“Beans would have been something we regularly would have ate so we just decided to take that and make something really healthy and versatile with it.”

So far, there are three flavours available from The Cool Bean Company in Ireland — tomato, chilli and smokey paprika — and they’ve launched the first two in Britain.

“We launched in Waitrose on November 11 and even after the day of the launch we came back and ate beans for dinner!” Ms O’Connor joked.

The Cool Bean Company say it is bringing gourmet food out of the restaurant and into the retail market.

“We were seeing beans popping up in fancy gourmet restaurants but for ridiculous prices,” Ms Johnson, 29, said. “Ours are the first to hit the retail market and they’re so handy.”

“This is the start of the bean revolution,” the Tipperary native added.

Cool Beans are in chill fridges across Ireland in Super Valu stores and now can be found in 135 Waitrose stores across Britain.

“You can have them for lunch, just pop them in the microwave, or you can use the chilli ones in burritos or you can put them on baked potatoes — there’s loads of ways of having them,” Ms O’Connor said.

“The beans are available in Waitrose now so it’s very exciting for us, we’d been hoping to break into the British market,” she added.

It is early days for The Cool Bean Company — which is run by just three people — but the pair have their eyes set on world domination. 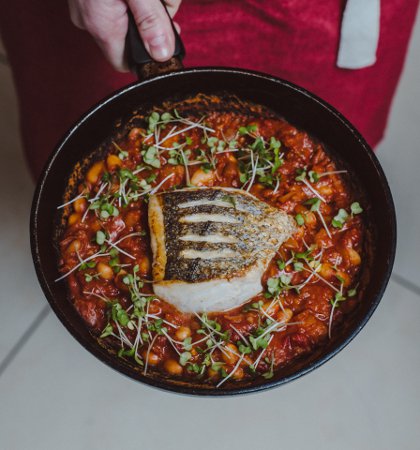 “We like to dream big — the ultimate ambition is to be an internationally recognised food company that is focused on providing new and interesting convenient solutions in the healthy eating market,” Ms Johnson said.

Here's a Cool Bean recipe to try for yourself...

COD POACHED IN CHILLI BEANS AND CHORIZO
Serves 1
Heat one tbsp of olive oil in a large frying pan.
When hot, add a handful of chopped slices of chorizo sausage and then fry for two minutes until the chorizo is starting to crisp.
Tip in 1⁄2 a tub of Chilli Cool Beans and simmer for five mins.
Add a skinless chunky fillet of cod (or haddock) to the pan, leaving the top of the fillet peeking out of the sauce.
Cover with a lid and leave to cook for three to five mins or until the flesh flakes easily.
Serve with crusty bread