A DUBLIN woman has opened a new flag-ship underwear store in the east end of Glasgow.

Married mother-of-two Nicola Dames suffered with bowel disease in her 20s and lived with the condition for many years before making the decision to have life changing surgery, which removed her large colon.

Post operation, the underwear available lacked “femininity” and back in 2008 Nicola, now 37, embarked on her first business venture.

Since then she has developed a new line in underwear for men and woman who have suffered with similar conditions.

The success of Vanilla Blush around Europe led to the opening of the first store in Glasgow. Speaking at the launch Nicola explained why the shop had an important social role in the city.

“The east end is the best place for me to live and start a new business,” she said. “It’s a beautiful boutique, it’s Bond Street meets Bridgeton. This is the place to be in terms of Glasgow’s regeneration.”

Aside from being the home of Celtic Football Club, the east end of the city is often in the headlines for the wrong reasons – a post-industrial hinterland of poor health, drugs problems and deprivation.

When Glasgow secured the 2014 Commonwealth games, it was regarded as a means for change. Second generation Irish councillor Liz Cameron believes that ventures such as Mrs Dames firm are essential to the area’s progression.

“It’s a chance in a life time to regenerate,” she said. “I think Nicola is an inspiration and aspirational figure, she took life and grasped onto it after something really unpleasant happened to her. Nicola changed that into an opportunity, I think that is fantastic.

"In that she is an inspiration to the women of the east end because their lives have been filled with tribulation. She has proved with guts and feistiness and a good family you can get over that. She is also providing employment for the area.” 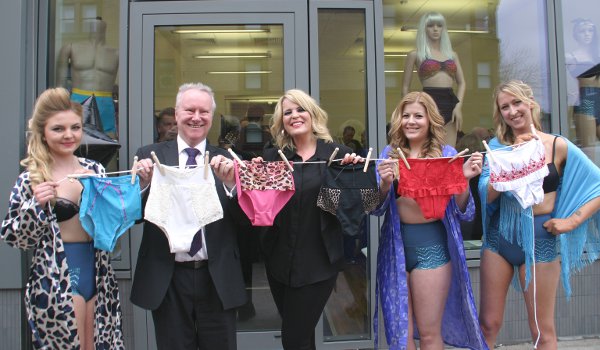 The former Lord Provost added: “It’s about pride and confidence, in the 1970s and 80s there was no confidence, the area had lost everything. The city centre and west end have picked up since then but it’s fair to say the east end has suffered the most because of the post-industrial scars, pollution in the ground, contaminated land and a bad health record.

"Now we have fantastic shops, the British Film Institute, a Scottish boxing centre. What empowered Nicola was confidence, pride and courage and that’s what this area is about.”

As Nicola suggests, that post-operation period can be a difficult time for both men and women who have suffered with a serious  bowel problem. Many feel a loss of confidence and embarrassment, even with a life-long partner.

“A lot of people come to us with various problems, we’ve had stories about the husband in another room or people afraid to go out on a date because they are afraid to broach the subject of intimacy,” she said. “For many reasons they come to us and we speak to them about it, the product is there to help.”

She added: “I suffered with the condition for many years, my life started when I didn’t need to worry about the nearest toilet and that I wasn’t incontinent at the age of 29, the surgery literally saved my life. After hospital there were issues getting back to normality, one problem was underwear.

"I thought there has to be something available, there was but what was on the market was very functional and I wanted an injection of fashion and sexuality to make myself feel good again. As a result Vanilla Blush was born.”

Launching in 2008 Nicola’s products are now widely available on NHS subscription and Vanilla Blush is going from strength to strength.

“The NHS subscription made a big difference, some of our products are available to people who have had the surgery for free,” she said.

“They can have up to six pairs a year, the business has opened up to customers in Republic of Ireland, Netherlands and France with Belgium and Germany following suit.

"The shop was the next stage because it gives what we’re doing more  visibility, it proves that it’s okay not to be embarrassed, myself and all the models we have used have all been through it. It’s a one stop shop for anyone who has had an issue post-surgery.”

“I designed some swimwear for men and support-wear, it’s a higher waist with an internal pocket bag,” she said. “It stops sweating and reduces the amount of time they need to go to the bathroom, it looks funky, if you’re communal dressing for football or boxing it’s as fashionable or if not more so than what anyone else is wearing.”

Born in Dublin, Nicola moved to London where she met her husband Simon, a former press officer for the Catholic Church in Scotland.

“When I moved to London I worked as a nurse in an intensive care unit. I met Simon at an Irish nightclub called The Swan in Stockwell, two days later I was diagnosed with my illness and he stuck with me, there must have been other parts of me that he wanted,” she joked.

“He’s certainly got a lot of experience, I do the creative side and he makes it look good – he’s better fitted in this role with me.”