“It really is, hand on my heart, the best production I have ever been in and am ever likely to be in,” announces Dermot Crowley after a day of rehearsals for Translations, where he is currently playing the role of Jimmy Jack.

“It is to the credit of the National Theatre that they’re putting it on in the Olivier stage. It’s their Wembley, basically, and they’re giving the stage to Brian Friel, and Ian Rickson’s production of Translations,” he adds.

Brian Friel’s Translations, which is currently running at London’s National Theatre, is an intimate play in an epic setting.

According to Crowley, who plays a central character in the revival of Friel’s enduringly popular 1980 piece, it couldn’t be more relevant with the traumatic times these islands are going through at the moment.

“There is so much resonance,” he says.

Translations is a play that about language, primarily the Irish language, a language that Crowley, despite not having lived in Ireland for decades, is still familiar with.

“I like it when I get back home to Ireland to listen to the news in Irish and try and make sure that I can grasp the general outline,” he admits.

Crowley, 72, moved to London in the seventies as a young actor for a role in a production of Juno the Paycock and admits he “kind of never went back again”.

“It’s funny,” he says, “when you’re born in Ireland and you end up living in England, there comes a tipping point where I’ve lived longer here now than I ever lived in Ireland. There’s a seminal moment, you know.”

Ireland is still a place he calls home however, with a house on the “glorious” Beara Peninsula, he gets back to his beloved West Cork as often as he possibly can.

A native of Cork city, he remembers being in infant school in Turners Cross when he was cast as the third shepherd in the Nativity play.

“Everybody had tea towels on their heads and their mammies dressed them up as angels, but I got measles before it happened, so I had to drop out and give the part to somebody else.”

The measles became “less toxic” before the production opened in the school so his mammy took him along to see it.

“I remember sitting there,” says Crowley, “in a blind five-year-old rage and somebody else was playing the third shepherd, rather badly, I thought.”

“Whether that had anything to do with sparking some kind of mad ideas, I don’t know!” he laughs. 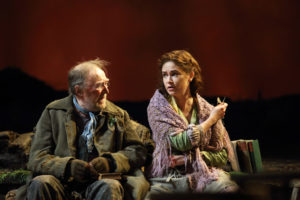 An acting career in the late sixties in Ireland was exactly what one would consider a mad idea, one that “horrified” his parents who had big ambitions for Crowley, who was an only child.

“If I became the Pope it probably wouldn’t be good enough,” he jokes, “so acting was certainly a no-no.”

However, through a combination of luck and talent, a career in acting managed to find its way to him.

His English teacher at his secondary school in Turner’s Cross, a man called John O’Shea, was also the founder of the Everyman Theatre in Cork.

After seeing the talented Crowley in school plays, O’Shea began to cast him in parts at the Everyman, but it was an advert in The Irish Times, looking for actors and actresses for the Radio Éireann Players, that secured a path for him as a professional actor.

Crowley admits he applied “with all the arrogance of a twenty-year-old,” giving his “vast experience” at the Everyman Theatre and in school plays, finishing his letter with a flourish, writing ‘I hope this application receives the attention it deserves’.

It seemed to work.

Crowley was offered a two-year contract with RTÉ, where he worked alongside the cream of Dublin’s actors at the time.

His career has spanned over five decades since, in radio, theatre, television and film, but Crowley still reserves a humble appreciation and joy for his day job.

“I mean, to get paid for doing something that you love is a great privilege,” he says. 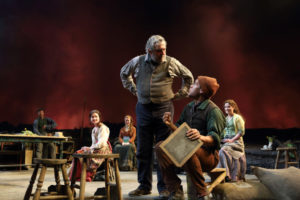 A scene from Translations at the National Theatre (Pic: Catherine Ashmore)

He first came in contact with Friel’s work was when he was cast in the play, The Freedom of the City, at the Abbey in Dublin in 1973.

“The crown jewel is Translations, it’s so magnificent.”

It is not his first outing as the lovable character Jimmy Jack, nor at the National Theatre for that matter, but Crowley insists that there’s more and more to discover in Translations every time.

“Brian didn’t write a syllable without it meaning something,” says Crowley.

“He has also written, in my opinion, the greatest love scenes since Romeo and Juliet. The construction of that scene between Maire and Yolland is heartbreaking and hilariously funny, it’s fantastic.”

Rehearsals have been intense, he admits, but only because Brian Friel demands an enormous amount from each character, each one having an emotional journey to go through during each performance.

“The writing is so wonderful that you can’t fake it. So you have to dig into yourself to kind of thank Brian for giving you the gift of this role.”

Friel was famously dismissive of directors, comparing them to bus conductors, “who were once deemed necessary, but are now seen as superfluous”.

Crowley can’t agree with Friel on this one, and certainly not with his current experience with the director Ian Rixon.

“He [Rixon] is an absolute maestro and a great teacher. We wouldn’t dream of doing a play without his input.”

Ian Rixon talks about “making a play”, a gradual process that “seeps into your bones by the end of it”.

For Tranlationd, they started off in a rehearsal room, where they sat at a table, read the text and researched it.

Experts arrived to talk about what British soldiers would be like in the 1830s in Ireland.

Irish historians came too, to put the play in historical context, regarding what was happening politically at the time.

And then there were experts in Latin and Greek, making sure they weren’t making a mess of it.

“Ian is such a wonderful director,” says Crowley.

“He’s a bit like a football manager, in that he prepares his team so immaculately that when we walk out on stage, it’s not a bunch of actors walking out on stage.

“It’s the people of Baile Beag in 1833 for those few hours that the audience is there.”

“And if we can achieve that, then we’ve served Brian’s play, as it should be.”

Dermot Crowley plays Jimmy Jack in Ian Rixon’s production of Translations at the National Theatre until December. For tickets and information click here.

RACHEL O'RIORDAN: 'People from Belfast have a gallows humour - possibly from surviving the Troubles'