Emerald Smoke: London and the Irish

Once there was an Irishman — and another Irishman — in a north London food store run by a Kurd.

“Are you brothers?” asked the shopkeeper, an outgoing individual new to the capital city of Britain.

“Ah, as a matter of fact, no” said one Irishman, perhaps the type always ready to consider a harmless untruth rather than disappoint or correct. “Then again,” said the other, a different type but apparently just as well-intentioned, “aren’t we all brothers?”

For myself to overhear the exchange required two other Irish people, my parents, both the children of small farmers.

Independently in the 1940s they decided the future lay not in their native Mayo, or the Dublin tried as an improvement on rural life, but across the Irish Sea.

Rather than London they settled in Birmingham, the place they died without having lived in Ireland again, but it was virtually guaranteed the son of ambitious immigrants would come to know Britain’s biggest city as either resident or regular visitor. My mother, incidentally, never set
foot there.

The shop incident gave me a smile both proud and wry.

The wryness in my smile was on behalf of the Kurdishman. A pleasant scrape with two elusive Irishmen would have brightened his day but he couldn’t have suspected just how many lay ahead in one of many London patches sprinkled with men and women moved by the same drum heard by my parents.

Despite nearly two hundred years of surges of Irish immigration  and the control of Ireland only given up little more than ninety years ago, for all the nagging suspicion the Irish just might be themselves in an unachievable relaxed state, the British may well still not quite know what to make of the Irish. What chance then for a man from Kurdistan?

“The Irish, like the Neapolitans, are not sure what truth is,” claimed the author Anthony Burgess.

Given the undisputable Irish affection for paradox, the widespread Irish ability to mould the expression of fact to suit hidden ends, in this matter the British Burgess shouldn’t really be accused of any racism.

Correspondingly, neither is it somehow racist to observe the British have been decidedly narrow in their understanding of Irish immigration into their country.

The fact is Irish immigration into Britain historically has shown a diversity which takes application to understand fully. It helps to bear in mind that Samuel Beckett himself admitted to a “chronic inability to understand… a phrase like the Irish people”.

Particularly since the start of the nineteenth century Britain — and therefore London principally — has been alighted on by all shades of Irishness.

Most incomers, the native Irish arrivals, have felt they were leaving home: for a sizeable and far better documented minority, the Anglo-Irish, those Irish able to identify British forebears, it has been in some respect an attempt to come home, a reunion containing some combination of the spiritual, cultural and political.

Common to all, the adults at least, has been the judgement life in a neighbouring island would serve their interests better than life in the island where they entered the world.

The Duke of Wellington, a military hammer of Britain’s enemies and a Prime Minister of Great Britain offered a second term, was born in Dublin. In Wellington’s last years’ many thousands of native Irish fled the Great Famine to settle in extreme poverty within the West End.

Talented descendants of Anglo-Irish families such as Oscar Wilde and George Bernard Shaw, from the Irish upper class and the commercial middle-class respectively, swapped Dublin for the vastly enlarged opportunities of London.

By the end of the nineteenth century the Irish and Anglo-Irish were more than ever fixtures in the Inns of Court, Fleet Street and London’s medical professions.

The Second World War, and reconstruction after it, led to new waves of mass immigration by Irish people from farmstead, village, town and city.

The London awaiting today’s Irish incomers has arguably never been harder to grasp as a social entity, functioning in a sort of complex unknowability ironically not so far from how the Irish can appear to the British.

A walk down a high street virtually anywhere in the city today is to experience Babel in relay through fragments of conversation, usually into a mobile phone.

Irish people, by not belonging to London despite homes in not just Kilburn and Cricklewood but so many other districts too, have become typical Londoners. Typical, yet special as well, for Irish history, influence and exertion have soaked into London with a pervasiveness unchallenged by any other minority.

Ireland, it can be said, has always partly been going on in London. Look for a single event for especially resounding support of that view and there’s the IRA explosion of 1975 which nearly killed John Fitzgerald Kennedy’s daughter around the corner from where James Joyce had once lived while arranging a grant from the British establishment.

Search for a bold stream of evidence and there’s what happened in London in the crucial years between the early 1890s and 1921, the point at which an Irish nation finally emerged.

At the inaugural meeting in 1892 of the London Irish Literary Society in Southwark, W. B. Yeats invited a toast to Ireland’s intellectual life “when the pressure of political struggle is removed from the country”.

Yeats didn’t make clear whether the removal referred to Westminster’s willingness to grant Ireland Home Rule or the prospect of violent revolution to drive out the British but the sense of the inevitability of a free Ireland was obvious. 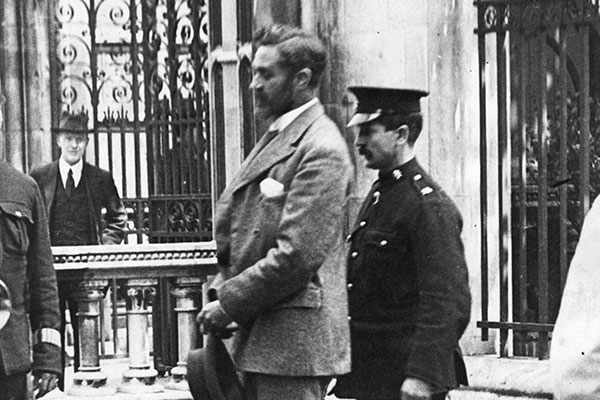 The Gaelic League, founded in Dublin a year later as a means of promoting distinctively Irish culture, gave approval for the first ceilidh to be held not somewhere in Ireland  but Bloomsbury Hall near the British Museum.

When Irish rebellion broke out in the middle of the First World War, London left a handprint in the blood by the execution of British civil servant turned Irish patriot Roger Casement at Pentonville Prison.

Within four years the War of Irish Independence had begun and the Irish Self Determination League, another organisation founded in London, dared to present revolutionary leaders at a public meeting held in the Albert Hall.

Time was now obviously running out for an occupant of 10 Downing Street to make the sort of speech Lloyd George did in October 1920:

“Let Irishmen manage their domestic affairs in their own way. Nobody wishes to manage  their domestic affairs…But dangerous weapons, like armies and navies, I think we could not trust them with. The Irish are a very attractive people, a very fascinating race, and a very gifted race. Some of the most charming men I have ever met in my life were Irish…but they will forgive me for saying, their temper is uncertain. What a chance you are asked to take to trust the destinies of Britain and the empire to a people who are apt to get fits of passion that sweeps away all reason.”

The peace talks Lloyd George not long afterwards found himself obliged to enter on drew a large crowd of London Irish to Euston Station to cheer the arrival of Michael Collins and the other Irish delegates.

Among those happening to arrive on an earlier train were the King and Queen back from Sandringham. The royals got a warm welcome too.

Independence for Ireland, when it came, did not proceed to dull the Irish undertone often present in the chimes of Big Ben. Even a random look at post-1921 events in London with an Irish relevance emphasises the deep resilience of the Irish connection.

As the Second World War neared, the IRA began to let off bombs in London in the name of complete independence, a trailer for bloodier things to come and the reason why the forays the little Princesses Elizabeth and Margaret made into the city with their nanny were put to a stop.

The breakthrough playwright Brendan Behan achieved with The Quare Fellow in 1956 happened in London, not Dublin. In 1969 the grown-up Princess Elizabeth declared herself pleased to open the Victoria underground line, a civil engineering tour de force achieved mainly with specialist Irish labour.

When Wembley Stadium rocked to Live Aid in 1985 it represented the success of a compassionate Irishman’s vision. In 1997 the Irish Ambassador to Britain unveiled a plaque at Camden Town Hall commemorating the Great Famine. Prayers offered at Westminster Cathedral by the Irish President in 2001 were said near the casket there inscribed with the names of the 50,000 Irishmen killed in the First World War fighting in the British army.

Invisibility and renown, exile and homecoming, end and beginning – London’s significance for individuals among the spectrum of the Irish in the city past and present can occupy positions somewhere on a broad scale.

In that spectrum can be found peers and peasants, artists and assassins, civil engineers and road diggers. Even so, it would be an unusual type of Irishman, whether from the twenty-six counties or Ulster, who was unable to agree London has more than anything else represented for arrivals from across the Irish Sea a range of opportunities, political, economic and cultural.

As for any balance sheet London itself might draw up, it would have to show that people once thought virtually synonymous with nuisance and treachery demonstrated themselves to be more than simply useful and entertaining but in fact indispensable and even inspirational.

Without the historical and contemporary presence of the Irish, London would surely be a lesser place, a diminished entity, like a great orchestra deprived of some key soloists and as much as half an instrumental section. It would not be blarney to insist that the very character of the place would be neither quite as compelling nor quite as vivid.

Emerald Smoke: London and the Irish, by Robert Gallagher is available for Kindle from amazon.co.uk