Everything you ever need to know about Ireland's showbands

The  showband was an Irish phenomenon that evolved from the strict-tempo dance-bands of the early 1950s.

Sometime in the mid ’50s, when Irish teenagers were tuning in to pop and beat music on crackly medium-wave radios, someone, somewhere, decided it was time to inject some excitement and colour into the dancing scene and the Irish showband was born.

People will argue for hours about which was the very first showband, but it’s safe to say that it was either The Clipper Carlton from Strabane or Dave Glover’s Showband from Newtownabbey.

For managers, promoters and band leaders, seven was the magic number.

A showband was expected to have seven members, usually all male, with the odd female vocalist.

They wore tailored suits and the standard line-up was made up of a rhythm section of lead guitar, bass guitar and drums and a brass section of saxophone, trumpet and trombone.

From the late ’50s to the early ’70s, more than 500 showbands travelled throughout the island of Ireland, some working up to five nights a week on ‘one-nighters’, playing in ballrooms, dance-halls and marquees to crowds in excess of 1,500.

Members of the top showbands were earning up to five times the average weekly wage and many drove expensive cars. They were recognised wherever they went in their time off and many of the bands had thriving fan clubs.

Less than a decade after it had begun however, the bright lights of the showband industry were fading, crowds were getting smaller and the younger generation were demanding more from their venues than four walls, a stage and a mineral bar.

By the mid ’70s almost all of the leading showbands had gone off the road and only a few stragglers remained.

The lights had gone out on a magical decade of live music and dancing.

Six of the most successful Irish showbands... 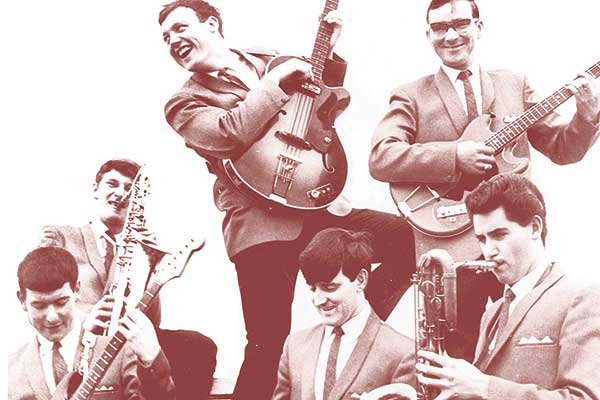 The Swingtime Aces (from Athenry, Co. Galway) formed in the late ’50s by Jim Ruane and Sean Glynn. They went on to headline in the first series of The Showband Show on Teilifis Eireann, travel on two successful tours of the US and Canada and on numerous tours of Britain. The band went through a big number of changes in personnel. Jimmy Reilly and Derek Kennedy were constant members and they were joined through the years by over a dozen other musicians. Local businessman Kevin Whelan was the band’s first manager. After 15 years on the road the Swingtime Aces decided to call it a day in 1972 and played their last gig in the Carousel Ballroom, Manchester. 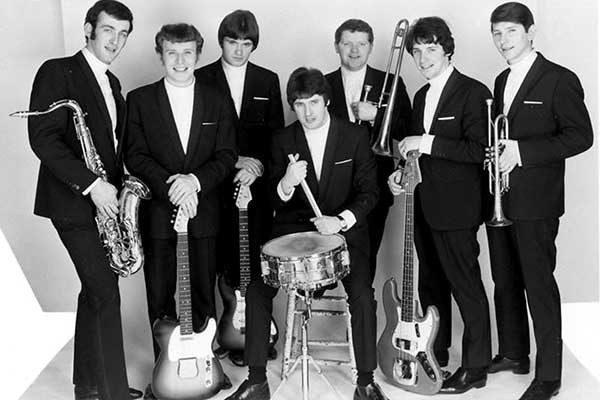 Ballina’s Jack Ruane led a dance-band from the 15-piece, sit-down-behind-the-music-stand orchestra of the ’40s and ’50s to the stand-up showband era of the ’60s. Jack was known as The Head by his musicians and on the road he was a strict disciplinarian. In 1947, he organised his first English tour and it made national headlines: “Irish band travels abroad! Jack hits the big time!” 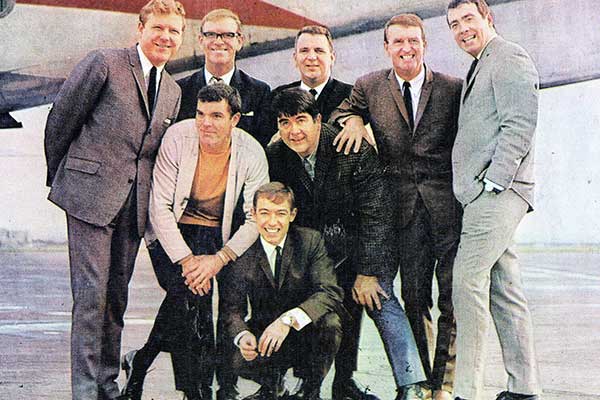 Strabane’s Clipper Carlton is generally accepted as the outfit that first put the ‘show’ into Irish showbands. Formed back in the late 1940s, within months they were packing thousands of dancers into ballrooms and halls throughout the island and for close on 15 years stayed at the pinnacle of Irish showbusiness. Led by pianist Hugh Tourish, the line-up included trumpeter Hugo Quinn, Art and Fergus O’Hagan, Terry Logue (sax/clarinet) and drummer Mickey O’Hanlon. They were among the first bands to distribute publicity photographs and they had their own collectable stamps printed. Their show-stopping cabaret act, known as Juke Box Saturday Night was what really made the Clippers different. All dancing would stop and the crowd would gather around the stage to watch impersonations of Sonny & Cher, Laurel & Hardy, Elvis Presley and other stars. In 1964, the Clipper Carlton decided to disband and some of them formed a new band called the Santa Fe. Within two years however, the Clippers reformed and were back on the bandstands. 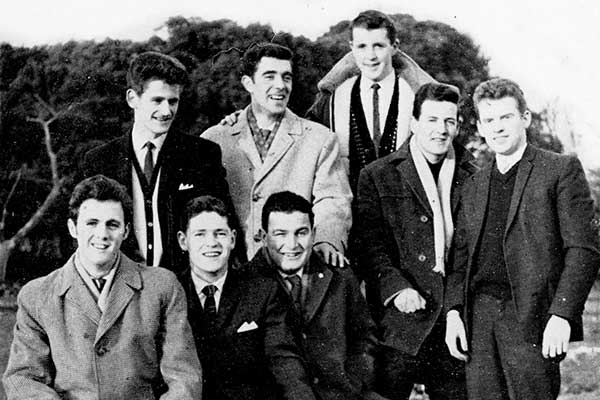 Formed in 1958 and managed by Billy Mulcahy, like most showbands at that time, in 1964, the band made a decision to move to London and base themselves there in the hope of making a breakthrough into the British charts. Things went well for them at first, they appeared on a few BBC television shows, they were featured in pop magazines and their first single on the Pye label, Land Of Love, featuring Charlie Cheevers on vocals, was played on all the pop stations. This was followed by some other singles including You Don’t Care, All I Want and That’s Alright, all original numbers written by members of the band. During their time in London however, original members Cooney, Carew and Phelan decided to return to Ireland, but the band continued with British-based replacements. While in London, The Blue Aces played in prestigious venues such as the London Palladium, The Lyceum, The Marquee Club and Victoria Palace, and shared the bill with international stars such as Lulu amd Val Doonican. Unfortunately, the big breakthrough never came, and in 1966, the band returned to Waterford, some of them joining other showbands. 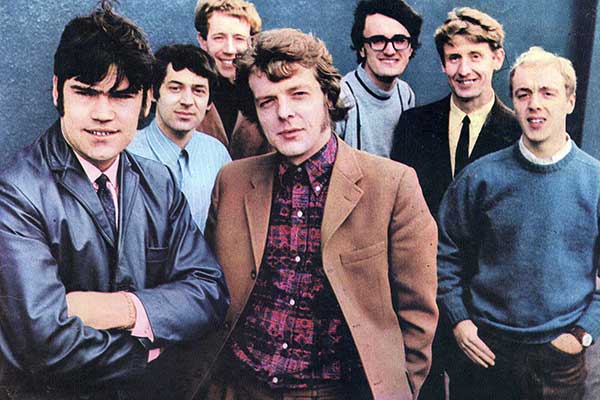 More than most bands, The Freshmen epitomised the divide between urban and rural Ireland, drawing their biggest crowds in cities like Cork, Galway and Waterford. In August 1962, in the Plaza Ballroom in Larne, The Freshman played their first gig and went from strength to strength, releasing a single in 1964, She’s The One You Love. They broke into the charts with Papa Oom Mow Mow followed by The Little Old Lady From Pasadena. They began to be known for their note-perfect renditions of Beach Boys songs and played on the bill with The Beach Boys at their Dublin and Belfast concerts in 1967. The Freshmen’s Billy Brown passed away in June 1999, aged just 56. His legacy, and that of his colleagues is one that Irish people can be very proud of The Freshmen, a band that broke the showband mould. 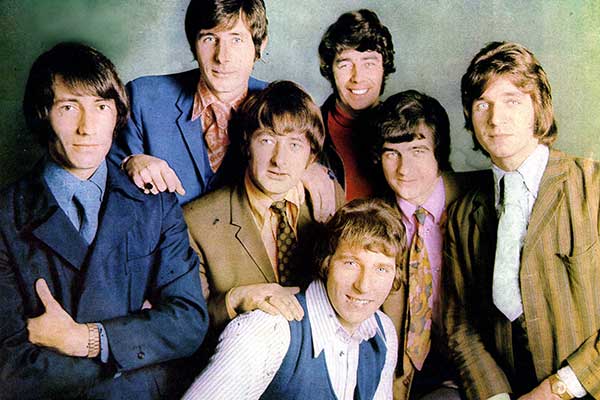 The Kerry Blues came together in 1965 when two young Tralee musicians, D.J. Curtin and Johnny Wall, were approached by the proprietor of the Brandon Hotel to put a band together and fill in at the hotel ballroom for a band who had cancelled. D.J. Curtin sang big ballads in the style of Welsh superstar Tom Jones and had a huge hit in 1968 with Almost Persuaded. The band performed on television many times and they toured Britain, Canada, the US and ballrooms all over Ireland. In 1977, D.J. Curtin left the band to team up with Brendan Bowyer in Las Vegas.

Francis Kennedy is a musician and writer who lives in Co. Galway. He lived through the ’60s showbands scene, played guitar and bass in a number of bands and has collected hundreds of photographs, records and memorabilia from the showbands era. Read more at irishshowbands.net