Film Review: Pierce Brosnan embarks on some 'geri-action' in Survivor

“HIS code name’s the Watchmaker,” we’re told of Pierce Brosnan’s character in James McTeigue’s latest action flick Survivor, “he’s one of the most wanted assassins in the world,” apparently.

We’ve become so used to seeing Brosnan, 62, leaping around and going boom-boom that it almost goes unremarked that he’s getting far too old for this sort of behaviour.

With Survivor Pierce Brosnan adds yet another contribution to the sub-genre of “geri-action”. This movie category entails ageing male actors playing roles that really ought to go to much younger men.

All are guilty of acting macho and indulging some symbolic phallic fantasy, in which guys who are old enough to know better keep brandishing their weapons in public.

Anyway, Brosnan plays the Watchmaker as a humourless, gimlet-eyed killer, a one-man tsunami of destruction.

His nemesis is Milla Jovovich’s US secret service operative, who’s stationed in the American embassy in London as part of the global war on terror.

When the Watchmaker detonates a bomb in a high-end Soho establishment, it’s Jovovich who is bizarrely (for the convenience of plot development) framed for the atrocity.

She goes on the run, but not before she’s got wind of the Watchmaker’s more deadly plan of bombing New York’s Times Square. Hunted by the Watchmaker, and her secret service colleagues, she must both evade capture and foil the forthcoming bomb plot. 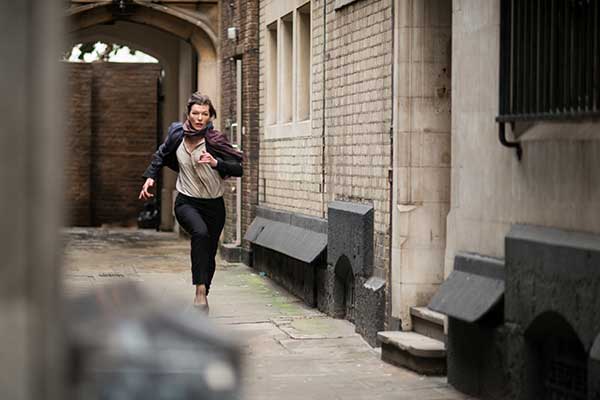 Forster’s appearance calls up memories of his late turn in Vince Gilligan’s Breaking Bad, where he quietly played a cynical veteran tough guy.

There’s no such nuance of character in Survivor. While none of the actors are at their best here, they’re happy to collect the pay cheque.

A lavish budget is put to good use for the action sequences and special effects. The slow-motion depiction of a bomb blast is most impressive. But McTeigue’s admirers will recall his superior V for Vendetta (2005) and wish he was still working with the Wachowski siblings.

Survivor is one of those movies that reminds us of better stuff seen elsewhere.

Brosnan’s diligent assassin lacks the elegant charisma of, say, Edward Fox in The Day of the Jackal (1973) or the acid-trip bravado of Dennis Hopper in Speed (1994).

In fact Brosnan himself was terrific as the hired hitman who’s tired of bloodshed in his existential comedy The Matador (2005). That film showed Brosnan to be an actor of many registers but in Survivor he’s sounding a repetitive note.

Survivor is released in Britain and Ireland on Friday, June 5