Theatre Review: The Playboy Of The Western World at Southwark Playhouse

THE historical events surrounding the first staging of JM Synge’s best-known play are almost as famous as the wonderfully wordy work itself.

It was 1907, political tensions in Ireland were bubbling beneath the surface.

Nationalists were riled up — ready for self-rule, and not in the mood to be messed with.

Synge, like so many of the best creators and artists, was at somewhat odds with his country’s mood, nor was he willing to be a mouthpiece for a certain strain of Irish nationalism.

As the story goes – one minute (according to a telegraph from Lady Gregory to a sick-in-bed Synge — all was well and the play was a success), but as they say  – it ain’t over until the fat lady sings.

Come Act II, when the Synge’s anti-hero Christy Mahon says: “It’s Pegeen I’m seeking only, and what’d I care if you brought me a drift of Mayo girls, standing in their shifts itself maybe,” that the audience lost patience with what they saw as a posh Proddy’s play making fun of the good people of rural Ireland and things got rowdy. 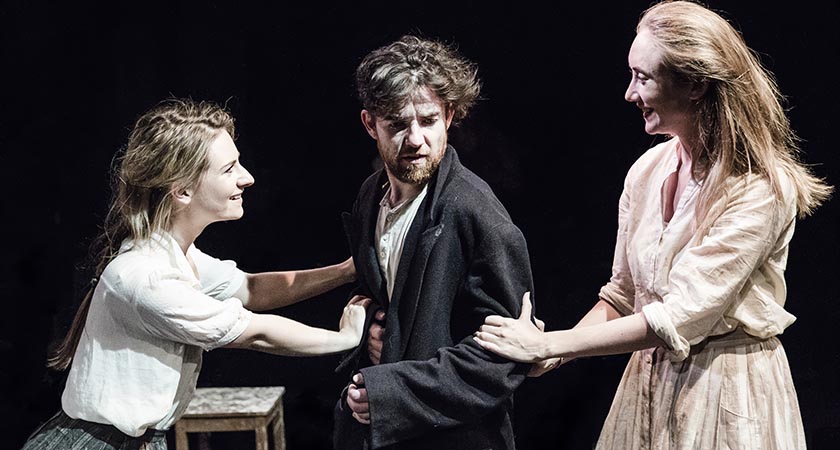 Fiery material then for this slightly scaled back Southwark Playhouse production.

The scene is set (with a guerrilla twist of a loud Thin Lizzy track as the cast slap mud on the walls) in a local country pub in Co. Mayo.

In arrives protagonist 'playboy' Christy Mahon, with his tall tale of patricide.

The news of this murderous stranger has the men enthralled and the women wooed for a while, until Christy’s yarn starts to unfurl.

Let’s start with the positives: Folie à Deux Productions have produced an honest and hearty version of Playboy.

There are (as Synge intended) great moments of wild comedy, juxtaposed with serious questions about heroism, religion, politics, faithfulness and family.

One of the best things this production brings to the fore is how Synge ruffled Irish feathers by messing up our neat notions of masculinity and femininity (best demonstrated by characters like Christy Mahon, Shawn Keogh, Pegeen and the Widow Quin).

The comedy stuff works well, the tragedy to a lesser extent and and the love story between Pegeen and Christy not at all.

This talented cast gave Synge’s words flight and fight but the Mayo accent is not easy to master, and some of the lines were lost completely.

Although he only wrote six plays in his short lifetime, Synge has influenced the world over. His lyricism has been mimicked many times, but never matched.

The Playboy Of The Western World at Southwark Playhouse, until August 29