The forgotten story of Irish footballer Barney Donaghey, killed in WWI's Battle of the Somme

BARNEY Donaghey was used to sprinting down the wings of famous football pitches, but on July 1, 1916, the 33-year-old Irishman was tasked with rushing across a far more hellish field.

It was the first day of the now infamous Battle of the Somme, the bloodiest day in the history of the British Army.

By the following day, 19,240 British Army recruits lay dead – almost 2,000 of them Irishmen, and Barney somewhere among them.

Fourteen years earlier, the Derry native was making his first and only appearance for Ireland in a home match against Scotland on August 9, 1902.

His name became celebrated among fans of Irish football – with the inside forward turning out for Derry Celtic, Belfast Celtic, Glentoran, Hibernian, Manchester United and Burnley in an illustrious career.

But on the body strewn, machine-gun battered frontline of the Somme, Barney Donaghey was just another number.

Bernard ‘Barney’ Donaghey was born two days before Christmas on December 23, 1882 at Walker’s Place in his beloved Derry.

In 1900 at the tender age of 17, the talented youngster secured a contract with his favourite club Derry Celtic and made an instant impact in the side.

He was a diminutive figure on the football pitch at only 5ft 4in, but an exceptional dribbling ability owing to his low centre of gravity more than made up for the fact.

After his debut against Cliftonville in September 1900, Barney quickly became a fan favourite among the Derry faithful.

In February 1902, he was honoured with a place in the Irish League XI to play Scotland’s XI in Dundee, before transferring from Derry to Belfast Celtic – the country’s greatest side.

His debut for Ireland came in the August of that year in Belfast, and it looked for all the world that Barney Donaghey was destined for the very top of European football. 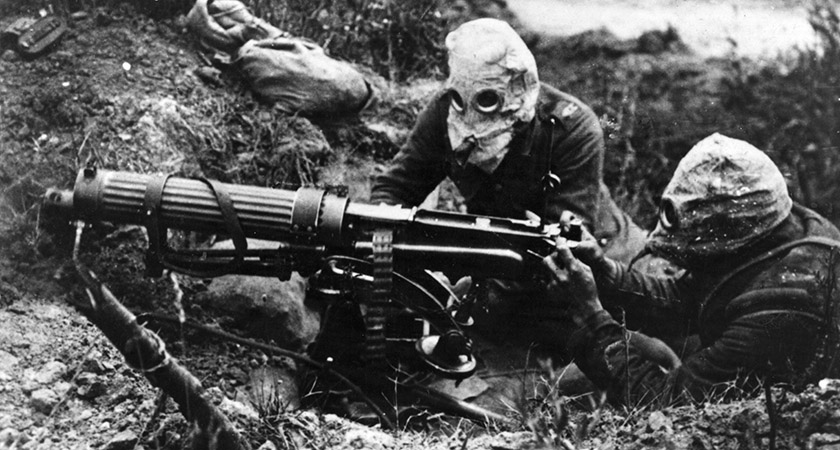 Gas-masked British machine gunners at the Somme [Picture: Getty]
After a spell with city rivals Glentoran, Donaghey caught the eye of Hibernian and moved to Scotland, but returned home in 1905 after struggling to settle in Edinburgh.

He returned to Derry Celtic where he performed as if he’d never been away, and his showings in a Derry shirt soon attracted attention from clubs in the world’s most illustrious league.

Donaghey signed for Manchester United for a fee of £100 in 1905 and seemed again to have gotten his career back on track. But the Irishman failed to establish himself in the side and soon returned again to Derry Celtic for a third and final spell.

Donaghey returned to English football with Burnley in 1907, but after a promising start he again failed to hold down a place and retired a year later.

When war broke out in July 1914, Donaghey volunteered for service in the British Army along with tens of thousands of his countrymen. He joined up with the 1st Battalion of the Royal Inniskillings Fusiliers and was deployed to Gallipoli in 1915.

In March of that year, Donaghey was involved in the bloody landings at Cape Helles in Turkey which cost thousands of Irishmen their lives. He was evacuated after sustaining a shrapnel injury to his head.

The survivors of Gallipoli were transferred to France in March 1916, where they and thousands of other Irishmen bolstered British defences across the western front.

On July 1, 1916, the Royal Inniskilling Fusiliers prepared to make the treacherous charge across no man’s land at the Somme. Their objective was to capture an objective codenamed Y Ravine.

They never reached it.

Barney Donaghey was killed sometime in the battle’s opening hours. His body was never found.

Donaghey’s name is listed among thousands of others at the Memorial to the Missing in Thiepval, Northern France, near to where he spent his final moments.

During his playing days, he was a well-known and much celebrated footballer of the Irish game.

But at the Somme – like so many countless others – the Irishman became just another faceless number in an all-too heavy casualty count.