IT WOULD be fair to say that our last three overseas family holidays have all had their dose of drama.

First off was the amazing safari holiday in South Africa which ended with a missed flight home due to striking miners blocking the main roads to the airport, leaving us stranded in Johannesburg.

Then there was the bucket list trip to Australia to see the Sydney New Year Fireworks which were overshadowed by the terrible bush fires and, more recently, skiing in the Dolomites which led to a speedy exit just before Italy went in to lockdown.

So could a return trip to Italy break our run of dramatic travel experiences?

We were really hoping so.

Late this summer we decided on the south east of Italy and the region of Puglia as our first post Covid lockdown destination.

We’d been before and found it not overrun by tourism and quiet even in the height of summer. 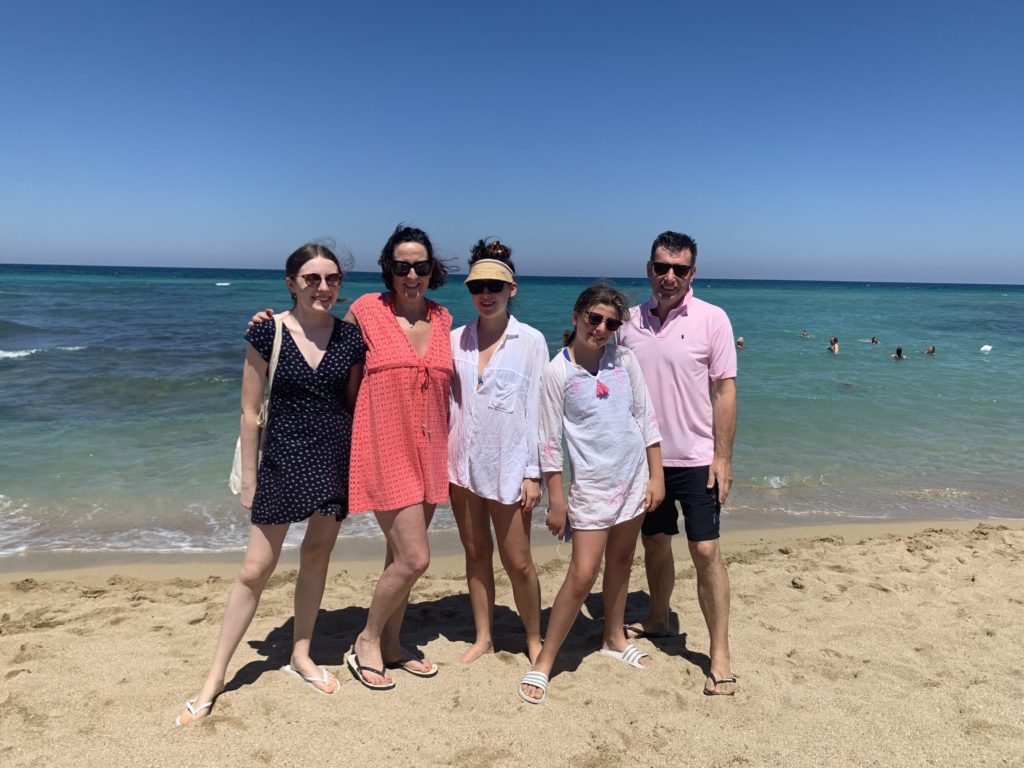 After searching online and quizzing owners on their new cleaning protocols, we booked Villa Francesca, the former summer retreat of the Mayor of Fasano, now tastefully restored as a three bedroom, three bathroom luxury villa.

After a very straightforward journey (masks on, hand gelled to an inch of our lives) we landed at Brindisi and picked up the car and within 45 minutes arrived at the villa.

Having endured three months of lockdown, we could not quite believe it – it was a real ‘’pinch me’ moment.  We are in Italy.  On holiday.

We felt like we’d won an Olympic Gold just getting here.

The air-conditioned villa, set in two acres of secluded terraced gardens, has a heated pool, lovely outside eating areas, luxurious fittings throughout and uninterrupted views over the olive groves to the sea.  Drama count 0.

In the new Covid era, we checked ourselves in, were immediately greeted with PPE equipment rather than the normal welcome basket and were the first visitors the villa had all year.

We’d arranged for its on-the-ground team to do our first food shop so we could settle in without having to venture out. 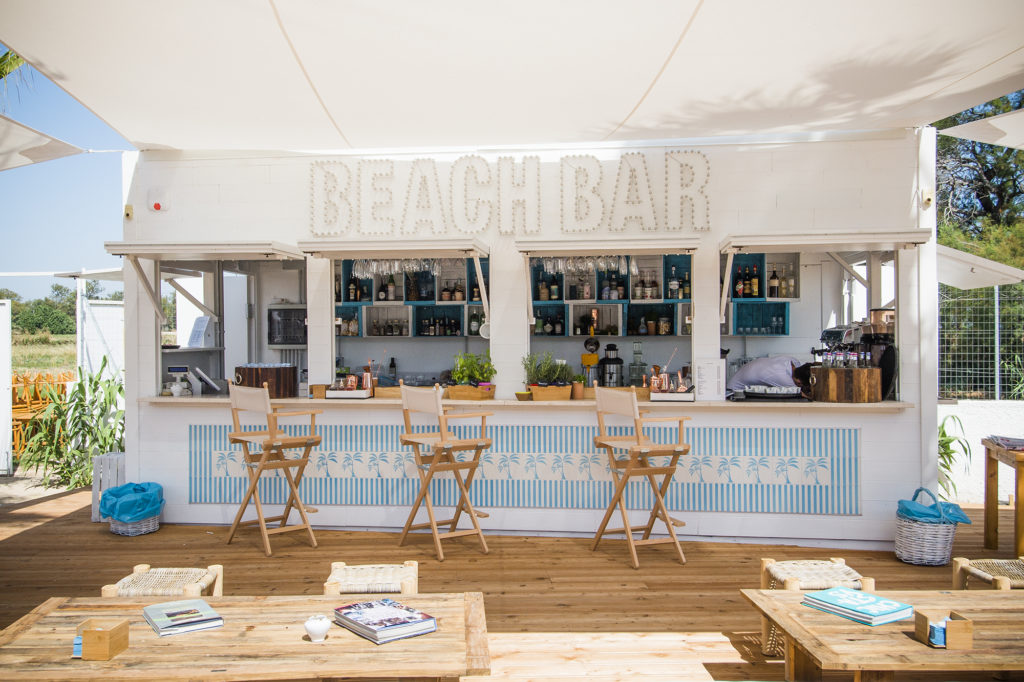 We also wanted to avoid cooking on holiday so decided to try out the villa’s chef service on our first night.

Lucrezia, a chef with 20 years’ experience, arrived with her visor on and took over the kitchen while we enjoyed a G&T on the terrace.  It was bliss.

We feasted like kings with a selection of dishes including Cozze Grantinate – mussels covered in breadcrumbs and cooked in the oven; creamy rich seafood served with cavatelli, a pasta typical to the region, oven-baked sea bream Puglian style with the most delicious Zingy Torta Limone for dessert.

At 40 Euros a head we not only had a dinner but plenty of left overs for lunch the next day.

Our holiday mojo was quickly coming back, so for our first trip out we decided to visit Locorotondo, a historic town perched on a hill just 10 minutes’ drive from the villa. 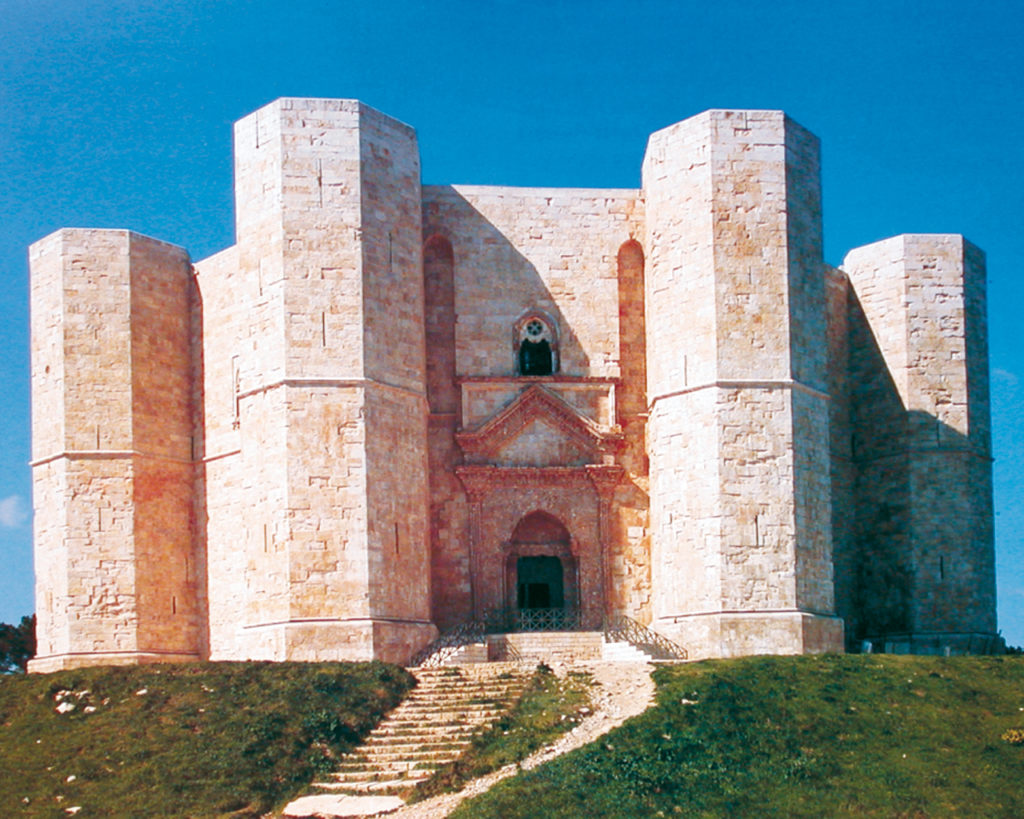 The pink-hued Castel Del Monte is well worth a visit

Its whitewashed buildings, flower-adorned pedestrian streets and pavement restaurants and cafes are picture perfect, decorated with the most beautiful of flowers.

Each year, its residents of the old city are encouraged to enter ‘Balconi Fioriti‘, a competition to plant flowers in pots and window boxes.

Each household displays a small number sign and tourists can vote on the most beautiful arrangement.

Here we enjoyed an important moment in our family’s history – our first dinner out in 148 days.

It was magnificent on so many levels.

The children enjoyed gelatos and the only drama we encountered was a scoop of ice cream falling on the pavement.

We also visited the small town of Alberobello, now a UNESCO world heritage site with its hillside streets consisting of the largest concentration of trullis.

These are local stone-built conical-roofed whitewashed structures which the region is known for.

With two teens and one tween in tow, we decided to do a segway tour around the town led by the knowledgeable Francesco, owner of AllwaysPuglia. 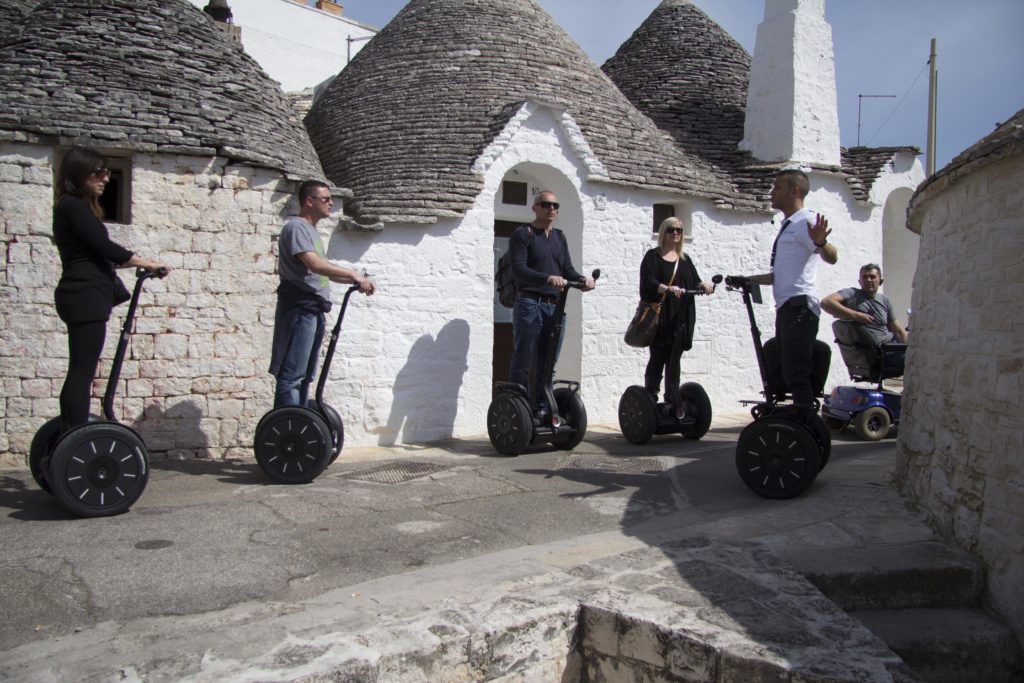 We learned all about Alberobello’s two historical districts, parked our segways and took a look inside a trulli, and also visited the Church of Sant Antonio, the only trulli church in the region.

No one fell off and the drama rating was still zero.  We were on a holiday roll.

One of Puglia’s most beautiful places to visit is Ostuni, also known as Città Bianca – the White City.

Perched on a hill, the centro storico is the place to visit with its whitewashed houses, charming little shops selling ceramics, oils and local produce, and pavement bars and restaurants with amazing views out to the sea.

We arrived on a sweltering day and decided to tour the old city with a guided tuk-tuk which was great fun as we whizzed through the narrow streets and the added breeze was a welcome bonus.

We were dropped off outside Ostuni’s remarkable cathedral with a Gothic façade which was built in the late 1400s and left to meander the shaded streets. 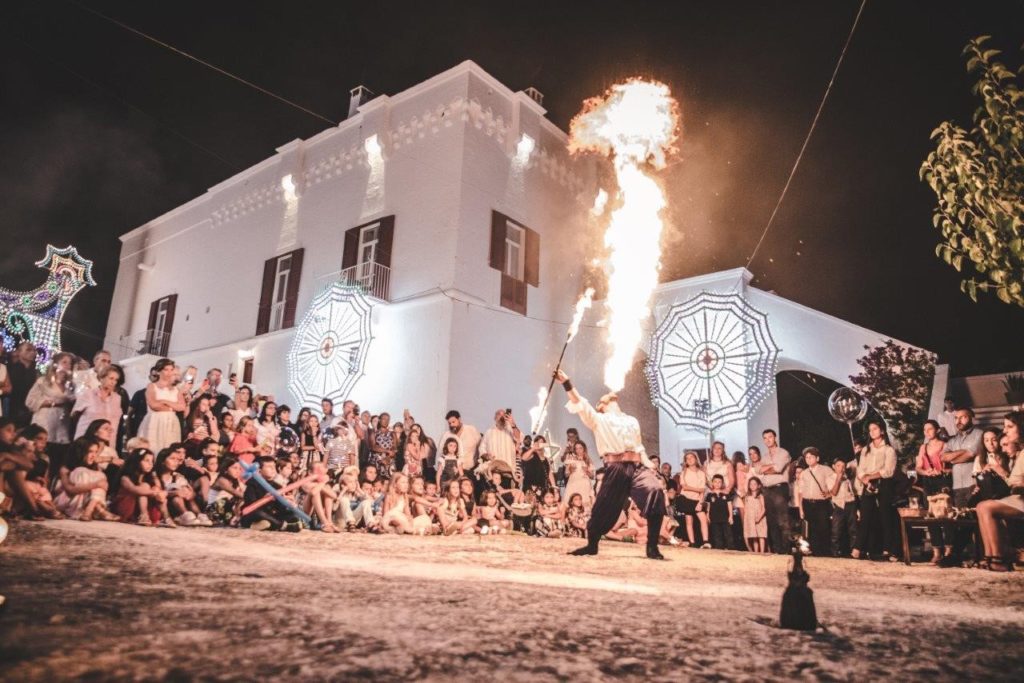 An evening of thrilling entertainment in Masseria Coccaro’s historic square

With 800 kms of coastline, Puglia boasts several of Italy’s most beautiful beaches and we were all craving a bit of beach and sea so we opted for a day at the super chic and chilled Le Palm Beach Club in Capitolo.

It wasn’t cheap but it was a real treat and kept the teens entertained with multiple Insta moments.

Puglia is known for its many beautiful masserias – fortified farmhouses found on the estates in the Puglia region and typically built in the 16th century - and we discovered one of its most beautiful, Masseria Coccoro, just 20 minutes away by car.

This is a family-run, 16th century farmhouse surrounded by olive and almond trees.

We dined in its elegantly lit outside terraced restaurant and were served the most delicious organic Puglian food and the children had “the best pizza ever”.

We enjoyed the evening so much we returned for its Village Feast Night which it holds every Thursday in summer.

Hands down, this was the highlight of the holiday.

Interactive food stations showed mozzarella being made as well as different pastas – and guests are encouraged to try.

A wide variety of foods were on offer, all the anti-pastas you could think of, locally caught seafood; Puglian meats, cheeses and also and A to Z of Italian desserts not to mention a selection of local wines.  It was pure magic. 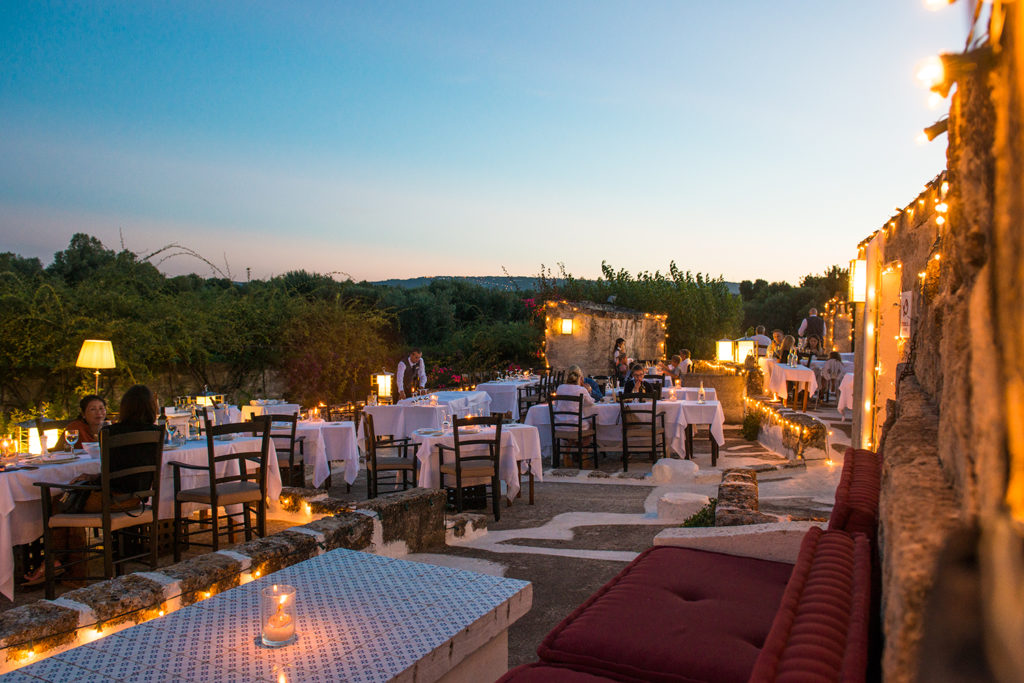 After a few lazy days by the pool, we decided to spend our last night in style and have dinner at La Calce, Borgo Egnazia’s newly opened bistro and sister restaurant to Due Camini, which was awarded a Michelin star in 2019.

Located in the portico of La Corte, underneath the tastefully lit limestone arches, chef Domingo Schingaro has created a simple yet innovative menu focusing on ingredients and flavour including dishes such as chicory, crab and sunflower seeds; local chicken, lampascioni onion, raspberries and celery; traditional orecchiette with three tomato sauce, cacioricotta cheese and rocket salad and the melt-in-your-mouth Podolica beef back ribs, chicory and yoghurt.

The menu was also a great hit with the children and offered something completely differing from the classic children’s offering.

We finished the evening in CHECK the brand-new Bar del Portico with a DJ mixing tunes and barmen making cocktails with a Puglian twist and toasted a holiday where the only drama we encountered was a punctured lilo on the last day.

Villa Francesca can be booked via Homeaway.

Prices for flights from London to Brindisi start from £121 return, all inclusive.

A week's car hire including excess protection and free cancellation with Zest from £142.

We booked our holiday direct and this saved money so do get a couple of quotes for hotels or villas.

Book car ahead to get through the airport quickly.  Zest Car Rental was the speediest service we have ever experienced.

With 60 million olive trees, the region produces more olive oil than the rest of Italy put together.

Puglia has over 300 days of sunshine a year.

The markets in Puglia offer the freshest produce straight from the farmers’ fields – tomatoes, fresh figs, lemons, nectarines, peaches and a wide selection of olives - the best we’ve ever tasted.

Puglia is the second biggest wine producing region in Italy and there’s a huge selection of wines to be enjoyed without breaking the bank.