In the article, entitled 'Brexit and Irish Unity', Adams spoke about the political turmoil that has resilted from the UK's vote to leave the EU and his fears for what might happen to the Good Friday Agreement and the hard-fought peace in the North.

1. He started with the historic Good Friday agreement and what it means for the island of Ireland

IN 1998, for the first time since partition in 1921, the people ofIreland, North and South, joined in voting for change when they took part in referendums on the Good Friday Agreement. That agreement was founded on the democratic principle that the people of Ireland, North and South, should determine their own future....The Good Friday Agreement replaced decades of conflict and injustice with a deal that put power-sharing and equality at the heart of government

That achievement and legacy is now at risk...The Brexit vote has caused political turmoil in London, a collapse in the value of the pound, predictions of a recession and economic uncertainty across the country

3. He says Brexit is the result of Tory infighting, and not in Ireland's interests

This referendum had nothing to do with Ireland’s economic interests, or even with reform of the European Union. Instead, it was precipitated by a toxic mix of factional fighting and leadership intrigue within the British Conservative Party and the rise of far-right, anti-immigrant groups like the U.K. Independence Party 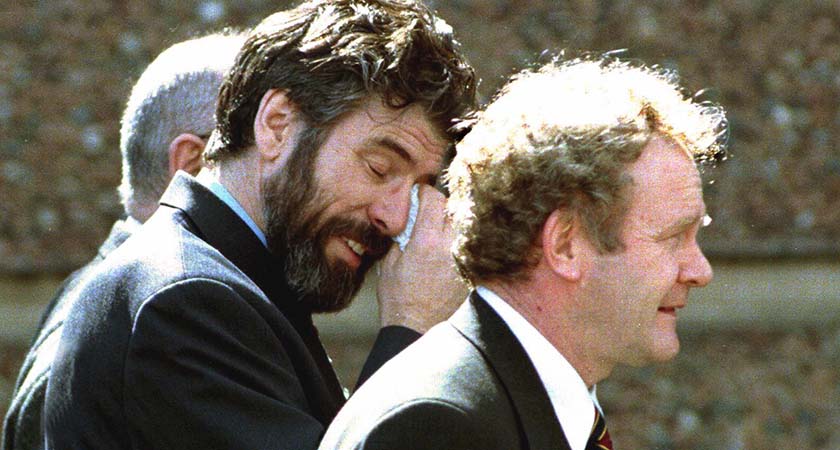 Gerry Adams and Martin McGuinness on April 10, 1998, showing  the strain of the all night and all day negotiations at Stormont after a peace agreement was reached by the parties 17 hours after the deadline (Photo: ALAN LEWIS/AFP/Getty Images)

4. He pulls no punches naming and shaming Tories

Leave campaign leaders like Michael Gove were also opposed to the peace deal in Ireland, which he once called a “capitulation.” The Tory Party’s presumptive new leader, Theresa May, believes that Britain should withdraw from the European Convention on Human Rights, which is a central component of the Good Friday Agreement

5. Here's what he envisages Brexit will mean for the North/South border

As a consequence of Brexit, that near-vanished border will become an international frontier between the European Union and an external state. Ireland’s economy and people will face the renewed imposition of checkpoints, as well as blocks to trade, services and the free movement of workers. Communities united by the Good Friday Agreement will be divided once again

6. He wants the North of Ireland to remain in the EU and appeals to the American government for their help

Successive presidents of the United States, with the support of Irish-Americans, have played a central role in promoting political progress in the North of Ireland. Given its investment in the peace process, America’s leaders must act to safeguard it, insisting that the British government honor its obligations under the agreements and give effect to the North’s choice to remain

7. And of course, he closes with his end goal - a unified Ireland

The people of the North could then choose whether they wanted to be part of a Britain outside the European Union or belong to a unified Irish state in Europe.

Read the article in full here