Brought to you by the Kerry Association London

“THERE are a lot of people out there doing some wonderful work and they are never appreciated. We want to recognise those people,” says Kerry Association London chairman Danny O’Sullivan.

The Gleesk, Kells native is calling on his fellow Kerry folk to nominate for this year’s Kerry Person of the Year Award - an annual award that honours the kingdom’s unsung heroes.

“Going back over the years, our winner has always been someone who has done a lot for charity, sport, their community, it could be anyone,” he says.

“There are a lot of people out there that we might not know about but who have done an awful lot - helping others to get jobs, looking after people. It’s those on the ground, doing that work that we want to recognise. They are the people who make life happen.”

Having grown up on a small farm before moving to London in the early seventies aged 16 and later setting up a successful construction company, O’Sullivan knows all too well the challenges of starting life in a new country.

As chairman of the Kerry Association he is now keen to help those in need as well as welcome some of Kerry’s new arrivals into the fold.

“We’re a very strong Association and we’d like to keep it that way,” he says. “I’m very grateful to all those who are involved with me on the committee, who put so much work in. We give a number of donations to charities and we are keen to get more people involved.

“We are looking for new ideas and people, or if there are Kerry people out there in need we’d like to step in and give them some help in some way.”

You can also post your entry to The Kingdom bar in Kilburn, NW6 7JG 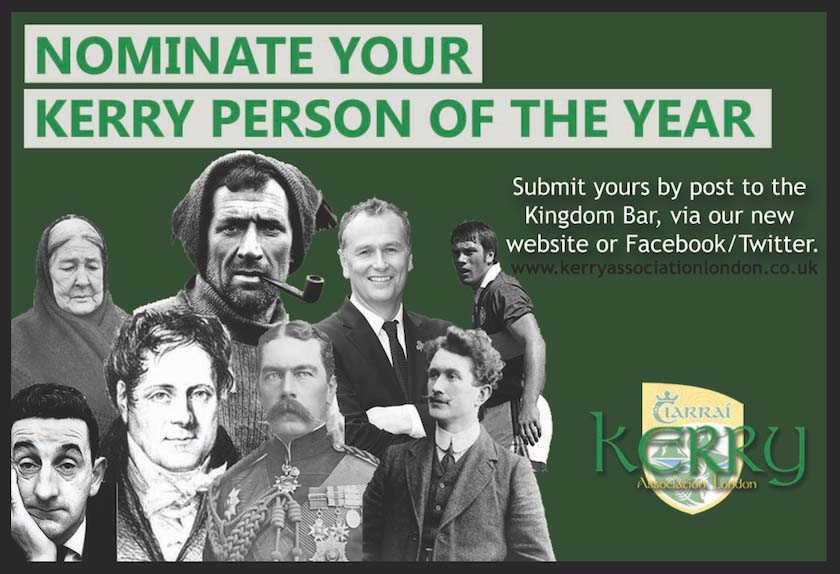 Last year marked the inaugural Young Kerry Person of the Year – set up in memory of the late Christy Kissane – a legendary publican and stalwart of the Kerry community in London.

“There are a lot of wonderful young people out there at the moment. They can bring a lot to the table if they’re involved,” O’Sullivan says.

The Kerry Person of the Year Award was set up to acknowledge the hard work and devotion of Kerry’s community in London.

There has been a history of successful and charitable Kerry men and women winning the highly coveted award including Shelagh O’Connor, Director of the New Horizon Youth Centre and the late businessman and philanthropist Brendan Riney, who sadly passed away just months after accepting his accolade.

“Brendan Riney was a wonderful ambassador to us and we send our respects to his family,” O’Sullivan added.

Nominations are now open for the 2017 Kerry Person of the Year, which will be presented at the annual Kerry Association dinner in October.

“If there are people out there who know someone, they should put their name forward,” O’Sullivan says. “It’s very important to have their name in the hat. There are lots of ordinary people out there putting lots into their communities who are not recognised.

“We’d like those people to be brought to our attention. We want you to nominate any man or woman of any age with connections to Kerry that you feel has made an impact or difference to the London Irish community.”

To nominate or for further details email [email protected]

You can also go to www.kerryassocationlondon.co.uk