DONALD 'Cowboy' Cerrone has been slapped with a six-month medical suspension after being badly beaten by Conor McGregor at UFC 246 on Saturday night.

The Irish fighter returned to the Octagon for the first time in almost 18-months, and it only took him 40 seconds to secure an emphatic TKO victory.

Cerrone suffered a broken nose and a fractured orbital bone, and as result the UFC have announced they will not allow him to fight again for six-months. 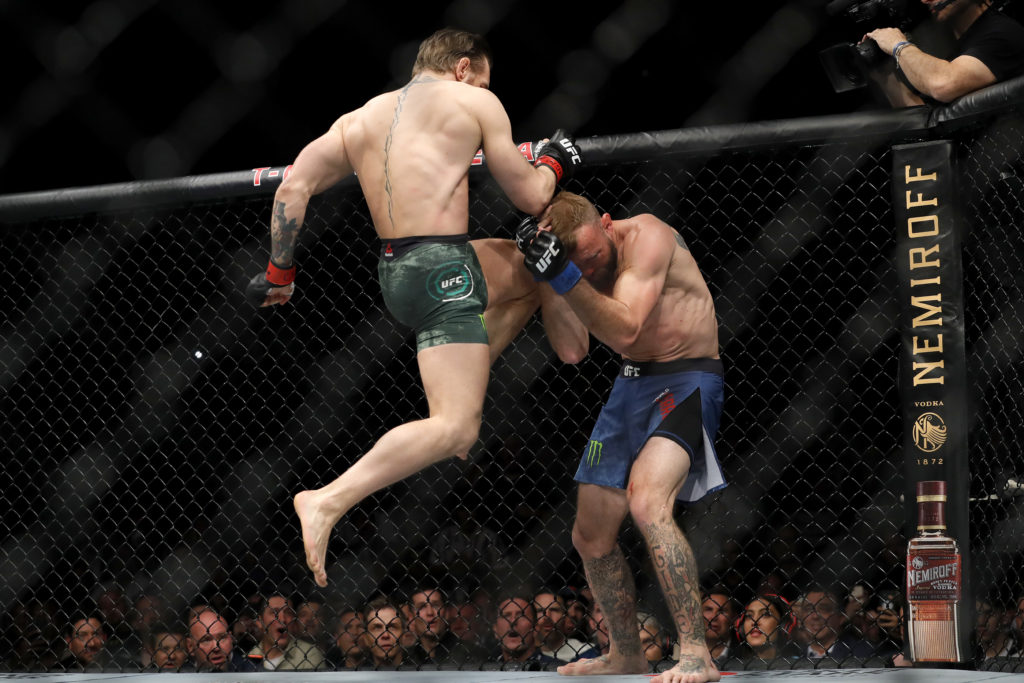 LAS VEGAS, NEVADA - JANUARY 18: Conor McGregor lands a knee to the face of Donald Cerrone in the first round in a welterweight bout during UFC246 at T-Mobile Arena on January 18, 2020 in Las Vegas, Nevada. (Photo by Steve Marcus/Getty Images)

During the fight, McGregor hit Cerrone with number of unorthodox shoulder strikes, which broke his nose, before a high-kick to the face sent the American to the floor.

A flurry of ground punches followed before the referee stepped in to stop the fight.

Medical suspensions are fairly common in combat sports, and are implemented to protect fighters and allow their injuries to heal properly.

However, suspensions lasting six-months are rare, only serving to emphasise the devastating nature of McGregor's victory.

McGregor walked away from the fight more-or-less unscathed, meaning he won't face a medical suspension of any kind.

For context, following his defeat to Khabib Nurmagomedov back in 2018, McGregor was handed a one-month medical suspension after his submission defeat to the Russian.

Speaking after the fight on Saturday, McGregor said: "The shoulder shot was a good shot.

Those @TheNotoriousMMA shoulders & head kicks via the Fight Motion camera?! 🔥

"It feels very good, I made history tonight, I set another record.

"I'm the first fighter in UFC history to secure knockout victories at featherweight, at lightweight and now at welterweight - across three weight divisions, so I'm proud of that."

Cerrone meanwhile was full of praise for the Irishman following the bout.

"Oh man, he got me with his shoulder straight away, distorted the s**t out of me and then head kicked me.

"I've never seen anything like it; he caught me way off guard. He busted my nose, it started bleeding, and then he head kicked me.

"I was like 'oh man, this happened that fast?' I got my ass whipped early."

Conor McGregor tells Sinead O'Connor he would 'die for her'