It is the second fight in a row the Irishman has lost, after being beaten by Poirier in January this year with a second-round technical knockout (TKO) at UFC 257.

McGregor had previously beaten Poirier in 2014, and was hoping to even the score at yesterday's match, but the much-anticipated fight came to a premature end just before the end of the first round as the McGregor fractured then broke his leg.

The Dubliner fired off a flurry of kicks at Poirier, 32, but the American bounced back with punches and elbows, and as McGregor stepped back his ankle rolled beneath him.

As the buzzer for the first round rung, it became quickly apparent that Conor McGregor had suffered a serious injury, with medics surrounding him, and slow motion replays showed his leg breaking as soon as he stepped backwards.

McGregor's leg breaking back on itself #UFC264 pic.twitter.com/sZyYH7el0P

The fight was called in favour of Poirier, but McGregor, true to form, continued riling the American fighter as he was treated by doctors with his ankle wrapped in a cast, calling for the fight to be "taken outside".

He insisted "This is not over" before he was carried out of the ring on a stretcher. 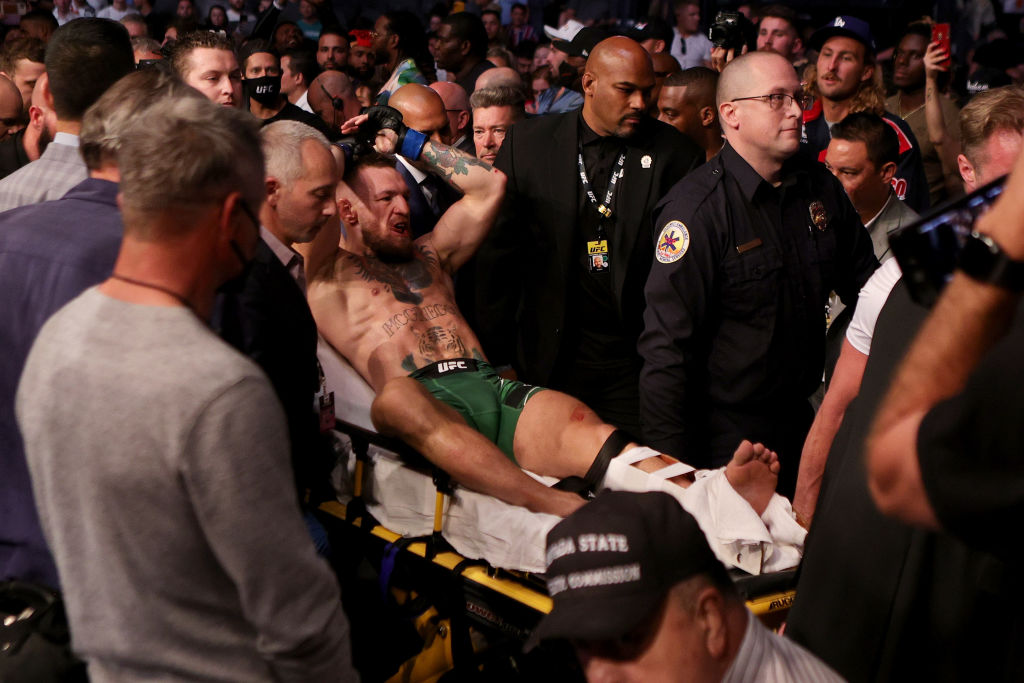 LAS VEGAS, NEVADA - JULY 10: Conor McGregor of Ireland is carried out of the arena on a stretcher after injuring his ankle in the first round of his lightweight bout against Dustin Poirier during UFC 264: Poirier v McGregor 3 at T-Mobile Arena on July 10, 2021 in Las Vegas, Nevada. (Photo by Stacy Revere/Getty Images)

Winner Poirier said he believes the Dubliner initially injured his leg with a "strong" kick, and broke it stumbling backwards.

He wished the fighter well, saying McGregor "was saying he was going to murder me, that I'd leave here in a coffin.

"You don't talk like that about people. I hope he gets home safe to his beautiful family."